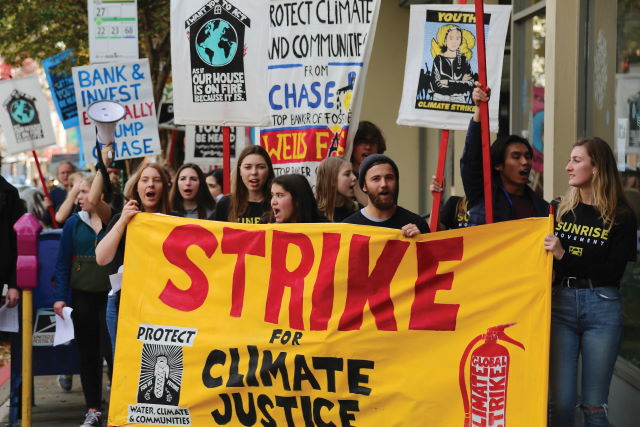 The Ford Foundation also funds the Sunrise Movement, a climate activist group whose members carry signs with slogans like “The Youth Are Coming for You.” Activists are whisked to a retreat where they are trained in shaping “public narrative.” Credit: Fabrice Florin. License: https://bit.ly/3wekB8S.
by Luke Rosiak

The foundations’ goals are political, and schools give them easy access to society’s most impressionable. But foundations relentlessly seek to shape children’s politics both inside and outside of the classroom.

The Ford, MacArthur, New Venture Fund, and Soros’s Open Society Foundations are among the top funders of the Alliance for Youth Organizing (AYO), which bills itself as “America’s premier youth organizing network.” Its website proclaims, “We entice millions of young voters into our sweet democracy.” Between 2018 and 2020, Ford gave AYO over $6.5 million. AYO and several other activist groups put voter registration stations in high school proms. If you have not heard of AYO, that may be because it operates through dozens of local afﬁliated fronts for it, such as Chicago Votes and Minnesota Youth Collective. Its New York afﬁliate aims to lower the voting age to seventeen.[1]

Some AYO afﬁliates look to use children to make conservative areas into progressive ones, like Forward Montana, which is aimed at “passing policies that are representative of the needs and vision of their generation.”[2]

Others have names designed to appear nonpartisan, such as the Ohio Student Association, which AYO acknowledges is actually an “intergenerational movement for racial, social, economic and educational justice. OSA’s leaders are between 18 and 35, some are not students.” Foundations frequently help establish such forums, which purport to speak on behalf of broad constituencies, but instead funnel people with legitimate, nonpartisan interests into groups that are actually controlled by liberal ideologues. Though equity policies often harm Asians, such as changing the rules for admission to magnet schools when too many Asians score highly on tests, an innocuous-sounding group in Nevada called the Asian Community Development Council is actually an AYO afﬁliate.[3]

The Ford Foundation also funds the Sunrise Movement, a climate activist group whose members carry signs with slogans like “The Youth Are Coming for You.” Activists are whisked to a retreat where they are trained in shaping “public narrative.” When a trainee asked whether they should be in favor of nuclear power, the reply was that “Sunrise’s role is not to be super caught up in the details. . . . We’re 18-, 19-, 20-, 21-year-olds who don’t really know policy.” On the other hand, when one trainee, playing the role of a news interviewer, asked whether Sunrise wanted to “drag this country into socialism,” her counterpart was more certain, replying, “Yes, that actually sounds great!”[4]

These activist groups understand the potency of using young children as props. In one noteworthy scene, adults in Sunrise Movement T-shirts brought young children and teens to the ofﬁce of Democratic senator Dianne Feinstein to demand that she support the Green New Deal in early 2019. “There’s no way to pay for it,” Feinstein told them.[5]

“Yes, there is,” a child directed.

A teenager added, “Our earth is dying, literally. And it is going to be a pricey and ambitious plan.”

“That resolution will not pass the Senate, and you can take that back to whoever sent you here,” Feinstein replied.

Moments later, an adult in a yellow Sunrise Movement shirt interrupted. “You’re looking at the faces of the people who are going to be living with these consequences . . . and we’re asking you to be brave,” she lectured the senator, who in 1978 discovered the slain body of Harvey Milk and who once had the windows of her house shot out by revolutionaries.[6]

As Feinstein and an aide told them they had to go, a girl with pig-tails, who looked to be about ten years old, put both hands out and children began repeating the talking points imprinted upon them by adults. “Of course, saving our world is a pricey and ambitious project . . .”

Ford also funds groups like Law for Black Lives, which “provides legal and policy support to youth-led campaigns to redirect funds from criminal justice systems to education and social services in black communities.” It is involved in paying bail to release black criminal suspects from jail, including those accused of violent crimes, and arranges for them to receive “cigarettes” and “burner phones” when they get out. It also describes itself as “the Black femme led legal arm of the Black Liberation movement.” And, along with ﬁve other activist groups, it created an educational curriculum where students are asked to agree or disagree with statements like “we must end incarceration in the U.S.” and “I see bail reform as a steppingstone to abolition.”[7]

In the next installment, foundations have also perfected the art of implementing national political agendas through local government.