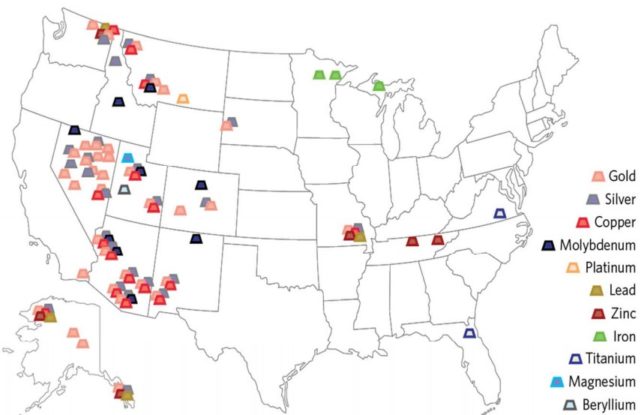 The U.S. economy and national defense rely heavily on imports of critical minerals from China, Russia, and other countries with poor records on environmental conservation, human rights, or both. Why has the U.S. become so dangerously dependent on unsavory foreign sources when the Rocky Mountains, Alaska, and other areas of United States hold vast, untapped mineral resources?

In fact, hardrock mining in the U.S. has been declining since the U.S. mining industry’s high-water mark in the late 1980s and early 1990s—despite increasing demand. The drawn-out mining permitting processes and burdensome environmental lawsuits are certainly major factors behind this decline, but the increasing withdrawals of public lands from access to exploration and mining have reached very worrisome levels—and the scope of federal land withdrawals are not well understood.

America’s resource endowment has provided for its inhabitants for over one-quarter of a millennia, and the vastness of its energy and mineral wealth never ceases to amaze. The West Texas Permian Basin and North Dakota’s Bakken Shale1 and other energy production have freed us from being held hostage to oil and gas imports and are making our country energy dominant. Similarly, the Rocky Mountains, Alaska, and other areas of our land hold vast, untapped mineral resources (see Figure 1). Most of that territory is federal lands owned by the U.S. government (see Figure 2).

Demand for hardrock minerals—including those “critical minerals,” needed for economic and national security such as rare earth metals—is soaring. U.S. imports of these minerals make the news almost daily because more and more of them are being imported from China, Russia, and other countries that have poor records on environmental conservation, human rights, or both.

Why has the U.S. become so dangerously overreliant on imports of critical minerals—which are domestically abundant and can be mined in an environmentally sensitive manner—especially when they are so vital to our economic health and national defense?

The drawn-out mining permitting processes and burdensome environmental lawsuits are two major factors. But probably the more insidious cause (factor), which largely goes unreported or underreported in the media, is public land withdrawals. That is, as a nation we have steadily withdrawn increasing amounts of federal and state lands from access to exploration and mining.

The best explanation of what public land withdrawal means to the future safety and security of United States is the classic expose “Is Our Account Overdrawn?” by Gary Benethum and Courtland Lee, which appeared in the American Mining Congress Journal more than four decades ago.

In their 1975 article, Benethum and Lee stated that, over the years, withdrawals of public land from operation of the mineral laws have taken many forms and been initiated by many special interests with little regard for their cumulative effect. The key question the authors asked is:

Have we [the U.S. government] withdrawn so much land from mineral exploration and development as to seriously affect the long-term mineral position of our country?

The answer to that 45-year-old question appears to be obvious today. This article is an update of their landmark expose, needed to remind us that the long history of unchecked federal land withdrawals from minerals mining has consequences that are becoming more severe with each passing year.

How Much Land Is Off Limits?

Gradually over the past sixty years until very recently, vast tracts of U.S. public lands have been continuously withdrawn from entry for mineral exploration. Beginning in 1968, the various federal bureaus and agencies sharply accelerated this withdrawal process, without coordination or regard for the cumulative effect on future domestic production of minerals and metals.

Significant additional acreage is effectively withdrawn from access to mining due to the severe restraints on exploration; these are de facto withdrawals. Much of this withdrawn land is in the very regions where we are most likely to find significant mineral deposits: in the western United States American Cordillera) and Alaska.

In the next installment of Federal Land Withdrawals, find out about how we overdrew our mineral account.