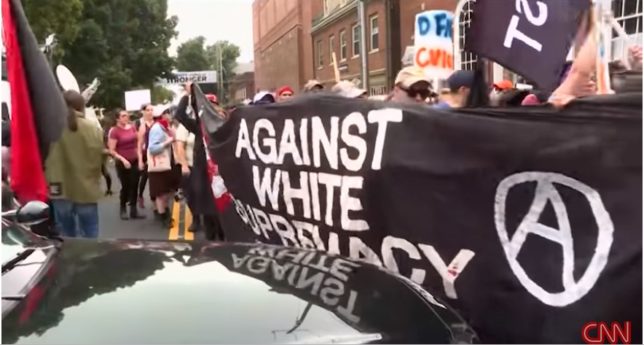 Most social media giants have policies against promoting violence. The left-wing Antifa movement not only promotes violence, but actively engages in it. But as of this writing, both Portland and Berkeley Antifa have Facebook pages, Boston and Hollywood Antifa have YouTube channels, and Antifa International and Antifa USA have Twitter accounts. Credit: CNN/Screenshot. License: https://bit.ly/2ZdnNUO.
by David Hogberg

In Reset, Pao wrote, “Imagine if we achieved ethnic parity and age parity and all parity” in the workplace. Pao and other people who possess a similar mindset believe that if the U.S. population is about 50 percent female, then 50 percent of the jobs in the tech industry should be held by women. That women hold only about 20 percent of jobs in tech is proof that there is sexism throughout the tech industry, or, as Pao puts it, “the whole tech system had exclusion built into its design.”

However, the statistic that men occupy 80 percent of tech jobs is no more proof of sexism against women than the statistic that women hold over 80 percent of jobs in elementary education is proof of sexism against men. Pao is guilty of what economist Thomas Sowell calls the “invincible fallacy.” It is “the belief that people would be, in the normal course of events, proportionally represented in various endeavors in the way they are represented in the general population. And if that doesn’t happen, it must be some kind of negative factor like either genetics or discrimination that is causing the deviation.” But, as Sowell notes, “you can read through reams of what scholars have written and find that nowhere is this norm [of equal representation] to be found.” In fact, the true norm is that almost all professions are not reflective of the population at large. Most will have gender, ethnic, and religious breakdowns that look nothing like the larger population.

There are numerous reasons for this, and Sowell admits that sometimes discrimination does play a role. But for the most part, discrimination is not a good explanation of disparities. In the case of men and women, women often earn less than men because they often have different priorities when it comes to employment. According to a recent working paper by Harvard economists, this occurs even in professions that are unionized, “where work tasks are similar, hourly wages are identical, and tenure dictates promotion.” The economists examined bus and train operators working in Massachusetts, and found that women earn about 89 cents for every dollar that men earned. What caused that disparity? For starters, women valued more time away from work and flexibility than men, taking more unpaid time off under the Family and Medical Leave Act. Women also tried to avoid working on weekends and holidays more than men. By contrast, men were much more likely to work overtime hours than women.

The different priorities that men and women have for their careers may go a long way to explaining why 80 percent of tech workers are men and over 80 percent of elementary school teachers are women. If, in general, women value being able to take time away from their careers to raise children, then a career in education is far more amenable than one in the tech industry. The tech industry is constantly changing, and to keep up with the advances in knowledge requires an employee to be on the job regularly. A woman who entered the tech industry and then took a few years off to raise children could find returning to the tech industry years later to be difficult. She would likely be way behind the curve.

Changes in elementary education move at a much slower pace. For example, teaching second grade math will not be much different in five to ten years than it is now. It is much easier to return to a job as a teacher after taking time off to raise children than it is as a computer programmer. That may be why women dominate elementary education but are a distinct minority in the tech industry.

If the gender disparity in tech is due to different priorities among men and women and not sexism, then Pao and her fellow employees at Project Include are not likely to make much progress at making tech reflect the gender breakdown of the U.S. population. As they find themselves frustrated, expect them to push for more government intervention.

If Pao and Project Include succeed, woke executives will dominate the management ranks of more and more tech companies. To see what that future would be like, we only need to look at how the current social media giants treat conservative voices.

In the last few months, Facebook banned the accounts of conservative firebrands Alex Jones, Paul Joseph Watson and Laura Loomer. Twitter removed a parody account of U.S. Representative and self-described Democratic Socialist Alexandria Ocasio-Cortez and the account of conservative pundit David Horowitz (the latter was later reinstated.) YouTube demonetized the channel of conservative comedian Steven Crowder. It also continues to keep videos on the channel of the conservative PragerU under its “restricted mode.” (The restricted mode on YouTube enables parents to protect their children from objectionable content.) The restricted PragerU videos include titles, such as “Why America Must Lead” and “Is the Death Penalty Ever Moral?”

The bias against conservatives is also reflected in what these companies do not censor. Most social media giants have policies against promoting violence. The left-wing Antifa movement not only promotes violence, but actively engages in it. But as of this writing, both Portland and Berkeley Antifa have Facebook pages, Boston and Hollywood Antifa have YouTube channels, and Antifa International and Antifa USA have Twitter accounts.

Conservative groups have begun to fight back. PragerU, for instance, has filed lawsuits against Google, fighting the restriction of its videos. Yet, conservatives should gird themselves for a long struggle, for the future of social media is bleak if Pao and Project Include succeed. The companies that will eventually compete with and perhaps even replace companies like Google, Facebook, and Twitter will be dominated by woke managers eager to censor conservative voices.