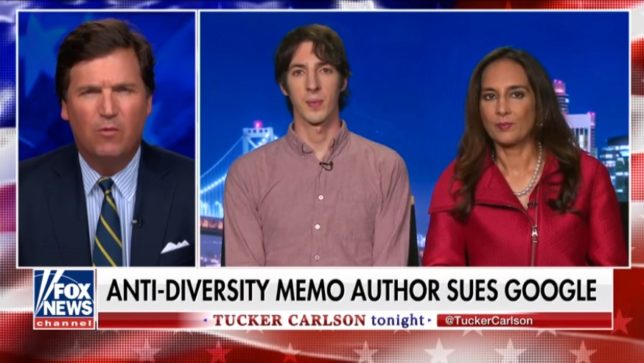 While employed at Google, James Damore wrote a memo that examined why only about 20 percent of employees in the tech industry are women. He cited research that examined biological and psychological differences between the sexes that explained some of the disparity. [Damore with lawyer Harmeet Dhillon] Credit: Fox News/Screenshot. License: https://bit.ly/2zk9LRS.
by David Hogberg

Woke executives in Silicon Valley have a number of arguments in favor of restricting free speech. One of the most common is that so-called “hate speech” ultimately leads to violence and that like violence, hate speech should not be tolerated. What actually constitutes hate speech is seldom specified, but you can bet that tech executives know it when they hear it.

Pao follows that logic in her crusade against “incels”, which is short for “Involuntary Celibates.” Pao describes incels as “an underground coalition of mainly men who complain about how society actively and unfairly deprives them of sex, often, they say, because they are too ugly or too fat.”

According to a tweet that Pao posted in May 2018, incels infest the tech industry. The tweet read, “CEOs of big tech companies: You almost certainly have incels as employees. What are you going to do about it?”

Pao followed up that tweet with a June 2018 op-ed on the tech website Wired. She warned that incels “share many values and tactics with white supremacist, men’s rights, and alt-right groups.” Incels have a “presence in our everyday lives, including our workplaces.” They “often work in the tech industry and in engineering—and because of tech’s long-standing, well-quantified lack of women and other underrepresented groups, it’s a natural fit.”

Pao’s first suggestion for dealing with incels is the same tactic she employed at Reddit: shutdown online forums where incels congregate:

We don’t allow groups of employees to congregate in person to hurt others; why would we allow it online? Why is it that when hate takes shape online, people automatically allow it as freedom of expression? Shouldn’t we respond to behavior that is intended to harm others, regardless of where and how it happens?

If an employee writes online that he hates women, that is reprehensible. However, it is free speech. As long as an employee does not bring that attitude into his workplace, he should suffer no repercussion from his employer. Now, if that same employee actively plans to harm a specific woman or group of women, then he is engaging in illegal behavior. In that case, his employer should respond with the appropriate disciplinary action.

Pao, however, blurs that distinction. For example, she laments that “hate groups have a huge advantage” in the tech industry because it is “an industry with predominately white men as employees and leaders, and a hands-off approach to monitoring speech and behavior.” She further states:

I’ve heard some leaders say that they’ll be perceived as making a value judgment about somebody’s politics if they confront these toxic groups. But incel culture isn’t a political belief; it’s an ideology of hate. We don’t accept open misogyny in our workplaces, and make no mistake: That’s what incels promote. [emphasis added.]

This was not the first time that Pao displayed hostility to free speech. The day before the 2016 presidential election, she published an essay on the website Medium. She was alarmed that then-candidate Donald Trump was supposedly promoting hatred and violence by speaking out against illegal immigration.

In the essay, she complained of people who “define inclusion as requiring all people and views to be included—regardless of how they promote excluding others. We find this definition offensive and reject it.” She warned Trump supporters that, “As a society, we cannot have a productive dialogue around your ‘diverse opinions’ if you do not respect us—our opinions and our identities—and instead threaten us.”

Obviously, threats of violence are not conducive to dialogue and debate. The rest of that statement, though, is sheer nonsense. Consider the United States Congress, where Senators and Representatives debate each other regularly. Do all of the members of Congress always respect each others’ opinions and identities? Of course not! For example, Representative John Lewis (D-GA) once said of Republican legislation, “They’re coming for our children. They’re coming for the poor. They’re coming for the sick, the elderly and the disabled.” Senator Chuck Grassley (R-IA) once tweeted that President Obama was “stupid” on matters of constitutional law. Disrespectful remarks like those are not uncommon on Capitol Hill.

She further asserted that “productive diversity of opinion cannot be based on principles of exclusion.” Presumably, “principles of exclusion” would include any view that we should exclude illegal immigrants from the United States. Exactly how a productive dialogue on immigration policy would be possible if it could not include views opposed to illegal immigration—views that many Americans agree with—is not clear.

But, for Pao and other woke executives, that’s the point. Such views are to be excluded because they are “hate speech” that leads to violence.

In Reset, Pao claims that Project Include was intended to “help CEOs and their teams build meaningful inclusion.” Those at Project Include “aren’t the diversity police,” she wrote. They “just offer a place to start and path to follow for CEOs who care about these issues but are overwhelmed by the choices.” In other words, the path to “diversity and inclusion” is voluntary.

But, after the state of California passed a law in September 2018 that forced publicly traded companies to include women on their boards of directors, Pao quickly cast aside any commitment to voluntary change. “Times are changing,” she wrote in the Washington Post, “And if you don’t, the government is willing to step in and make you.”

Like most woke ideologues, Pao is not content with trying to persuade others that her views are correct. If companies do not follow her recommendations, then forcing them to do so via government policy is necessary.

Whether California’s law was in any way needed is highly debatable. As Pao herself noted in her op-ed, only 26 percent of public traded companies in California have all-male boards. The 74 percent of companies that have at least one female suggests that the market is already moving in a direction she favors. Furthermore, having women on the board of directors makes no difference on company performance. As Katherine Klein, a management professor, notes, “Rigorous, peer-reviewed studies suggest that companies do not perform better when they have women on the board. Nor do they perform worse.”

You can count on Pao dismissing such findings and plowing ahead with campaigns for more laws like California’s. She also wrote in the Post that companies “should consider the impact of intersectionality, where people with multiple underrepresented backgrounds suffer cumulative harm.” Companies need to go “beyond binary gender from the start, which often leaves women of color—especially those who are underrepresented in sexual orientation, immigrant status or socioeconomic background.” If companies don’t go beyond binary gender, it will only be a matter of time before Pao wants government to force them to do so.

In the conclusion of Ellen Pao, find out how the “invincible fallacy” creates discrimination out of reasonable choices.