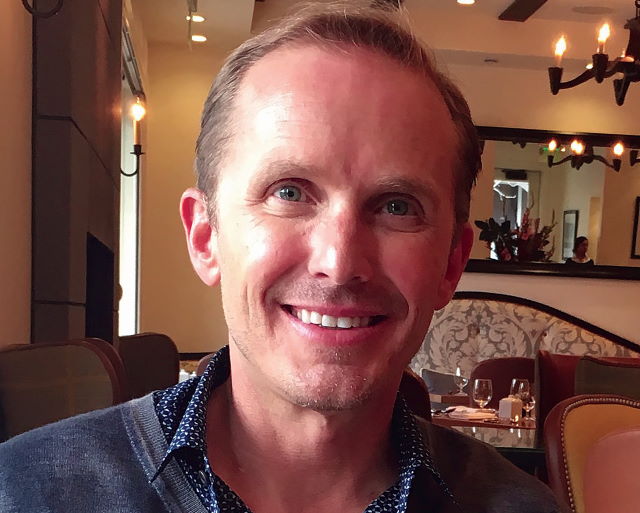 As of 2016, Ted Trimpa was on the board of American Bridge 21st Century Foundation, a lefty political organization founded by Clinton family attack dog David Brock. Credit: Xerxesm87. License: https://bit.ly/2UigciO.
by Ken Braun

As noted, on election night 2004 they flipped the Colorado Senate and the House on their way to a whole lot more.

Before it happened, in March 2004, the GOP-controlled Colorado House began committee hearings on a bill that would prohibit sex-ed classes in public schools from providing information on non-heterosexual behavior. Tim Gill was seated in the hearing room as the bill was debated, and The Blueprint portrays this legislation as the deciding factor leading to Gill’s place in the Gang.

LGBT rights was a hot-button issue in 2004 when voters in 13 states approved proposals to ban same-sex marriages. Colorado’s prohibition would be approved in 2006. These prohibitions, enacted in 30 states from 1998 through 2012, were ephemeral victories that were all overturned by the U.S. Supreme Court in 2015.

Unquestionably, Colorado’s blue political machine was created and sustained in large measure because of its participants’ ideological hunger to reverse free-market economic and labor policies and then sustain those victories by slamming the door on every potential GOP comeback.

However, the right-leaning social agenda of Colorado Republicans in the early 2000s was a major—arguably even essential—motivational fuel that started the machine up. Advancing LGBT issues was a primary policy concern for Gill, but fellow Gang of Four member Polis was also gay. And Pat Stryker’s billionaire brother, like Gill, was a big benefactor of LGBT-rights causes.

When Gill left the room after watching the debate on the sex-ed bill, he had mentally placed political targets on the careers of many Republican lawmakers. According to The Blueprint, he ran into Democratic State Rep. Alice Madden and told her his new motto: “Somebody’s gotta go.”

Madden became the House Majority Leader when Colorado Democrats took control after the 2004 election. She was an original member of the Roundtable of left-leaning power brokers who built the machine with the Gang of Four’s money. Looking back at that accomplishment for The Blueprint, she references a note from her files in which she had jotted down the following: “In 2004, the Republican majority leader . . . said the biggest threat to Colorado was gay marriage.”

In a March 2005 news conference that same Republican introduced a proposal to ban same-sex marriages and asserted the prohibition would create stronger marriages and alleviate pressure on prison and school finance budgets. Less helpful for his cause was another Republican lawmaker at the event who was quoted in the Rocky Mountain News talking up the supposed case of a nine-year-old Indian girl wedding a stray dog. This was presented as evidence that allowing same-sex unions in Colorado would unleash a Pandora’s box.

As it turned out, the Republicans opened that box . . . and Tim Gill was inside.

A very smart man with a net worth in the mid-nine-figures had been turned into a formidable GOP foe. As recently as 2003, according to The Blueprint, a far less politically agitated Gill had given $10,000 to the Republican Governors Association.

Left-leaning lobbyist and political consultant Ted Trimpa was credited in The Blueprint with showing Gill why he needed to put his money behind ousting Republicans. Similarly, Albert Yates, the then-recently retired president of Colorado State University, was the catalyst for Pat Stryker’s participation in the Gang of Four. (Stryker’s Bohemian Foundation is also a big donor to the school.)

Trimpa and Yates would both go on to roles assisting national left-leaning political organizations that were seeking to replicate the Colorado success. As of 2016, Trimpa was on the board of American Bridge 21st Century Foundation, a lefty political organization founded by Clinton family attack dog David Brock. Yates is a board member of Catalist, a data firm that assists left-of-center political and policy organizations.

The gathering later identified as the “Roundtable” began to meet weekly at the headquarters of the Colorado Education Association. Ted Trimpa led the discussions and represented Gill. If the embryonic machine could be said to have its first political boss, it was arguably Trimpa.

But as with the traditional political machines, Trimpa’s leadership role reflected only his talent for keeping the entire group on task toward a shared agenda. It did not indicate any preference for his priorities or those of Gill. According to The Blueprint, the meetings never made time for discussing such things:

Discussion of issues that might divide the group were strictly verboten. “All the participants checked their political agendas at the door,” said Polis later. “There was never any policy discussed. There were never any issues discussed. There was simply a group of people who believed that all of our issues, and regardless of what they were, what our differences were, would be better represented in a Democratic majority.”

The group also swiftly concluded they were building a replacement for Colorado’s Democratic Party—and they were eager to do so. The Blueprint noted the recent enactment of Amendment 27 had “all but killed political parties.” It quoted Jared Polis saying it “took parties out of the mix as a money entity” and “guaranteed that the party itself, Republican or Democrat, could not possibly be the main entity that . . . ran campaigns.”

Counterintuitively, the Democratic Party and its politicians had not been built with a singular focus on the only thing that mattered to the Roundtable: taking power. Echoing a concern The Blueprint stated was widely held by the group, Jared Polis said political leaders controlling the big money in both parties had led to a profligate policy of rewarding loyalty, spending inefficiently, and having “a tendency to put valuable resources into races they’re probably not going to win because they want to win friends.”

In place of loyalty-fueled rival fiefdoms, the Roundtable designed a unified political machine singularly engineered to seize power. Political races were selected and funded solely because of their likelihood of beating as many Republicans as possible. Nobody was in this to make friends.

Each of the left-leaning labor unions and interest groups in the coalition brought political infrastructure and money to the Roundtable and directed those assets to the House and Senate races the group agreed were critical to winning majorities. As an example, The Blueprint reports the AFL-CIO collected $400,000 in $50 donations from its members, and then it fired those bundles of money at Roundtable-targeted races.

But the commitment from the Gang of Four was a gamechanger that helped keep all others onside. The Blueprint pegged total spending from the Roundtable on 2004 races at $3.6 million, with roughly $2.5 million coming from the Gang. Stryker gave at least $845,000, Gill almost $775,000, and Polis and Bridges each forked over more than $400,000.

Money, and the normal political campaign irritation of diverting valuable time and energy to raising it, had ceased to exist for the machine. According to one senior staffer, “fundraising basically consisted of occasional reminders to donors to let them know we needed payment on their pledges.”

The Blueprint reports the resources and focus assembled by the Roundtable was unprecedented, largely hidden before deployment, and unmatched by any other political entity in the state that year: “Republican candidates had no idea what was coming their way.”

In the next installment of “Colorado’s Big Blue Political Machine,” see how the Gang of Four and the Roundtable flipped Colorado blue.