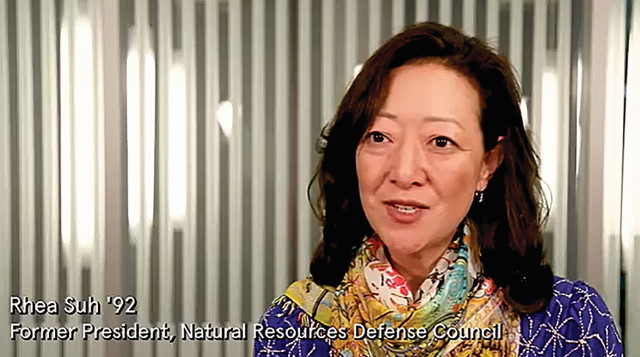 Rhea Suh, the current president of the NRDC, previously worked as an assistant secretary for policy, management, and budget in the Department of Interior during the Obama administration. Credit: Barnard College. License: https://bit.ly/36CIBHI.
by Kevin Mooney

The Paris Agreement and the Obama State Department

The major target for activists and media types gathered at U.N. meetings is not China, but the United States. In fact, compliant media organs provide China with a platform to criticize President Trump and the U.S. in general for withdrawing from the 2015 Paris Agreement, which requires participating countries to curb their carbon dioxide emissions, ostensibly to combat global warming. This was the case during the most recent meeting in Madrid, and it will certainly be the case at the meeting next year in Glasgow, Scotland, if Trump wins reelection.

The timing here is a bit interesting to say the least. Under the agreement’s provisions, a country cannot give notice of withdrawal prior to three years of when the agreement takes hold in the relevant country, which for the U.S. was on November 4, 2016. The Trump administration gave its formal notice to withdraw on November 4, 2019, but there’s an added complication. The withdrawal process takes 12 months, which means that the earliest withdrawal date would be November 4, 2020—the day after the 2020 U.S. presidential election.

China is one of 194 states, plus the European Union, that are party to the agreement as of February 2020. But since China is the world’s largest emitter of carbon dioxide emissions, why would it willingly enter into a treaty that would hamper its economic growth and international ambitions?

Bonner Cohen, a senior fellow with the National Center for Public Policy Research, explains (in an interview with this author) that China has no more intention of honoring its commitments to the Paris Treaty than the Soviet Union did of honoring its arm control agreements: “Like the Soviets before them, Chinese communists seek to use international agreements and treaties as a conduit for constraining American military and economic power,” Cohen continues, “The Paris Climate Agreement heavily restricts U.S. energy development, which is what Beijing wants. This has both national security and economic implications.”

But where U.N. climate change agreements are concerned, it helps to have transnational green activists well positioned inside the U.S. government and to have environmental advocacy groups maintaining a steady chain of communication with those activists whenever they gain a foothold inside the executive branch. FOIA records obtained from the U.S. State Department thanks to litigation filed in 2018 show that this happened under the Obama administration.

The FOIA lawsuit filed by Government Accountability and Oversight, a nonprofit public interest law firm, on behalf of the Institute for Energy Research broke loose a chain of communication between environmental activists with close to ties to China, who advised and collaborated with Obama administration officials. The FOIA results are instructive because the environmental groups in question denied operating as foreign agents during congressional investigations. But email correspondence produced through FOIA show the World Resources Institute and the Natural Resources Defense Council were advising Obama State Department officials on climate change policy. The Paris Agreement figured prominently in the correspondence between these Obama administration officials and the environmental organizations that are closely tied in with the Chinese government.

Energy policy analysts and attorneys who have reviewed the FOIA records found a concerted effort to avoid describing the Paris Agreement as a treaty so the Obama administration could take unliteral action without obtaining the “advise and consent” of the Senate.

Natural Resources Defense Council. In particular, Jack Schmidt, NRDC’s director of international programs, exchanged several messages with Obama State Department officials including Todd Stern, who was a special envoy for climate change at the time of correspondence in 2014 and 2015. Several messages are heavily redacted in the FOIA records, making it difficult to flush out key details. But as noted in an interview with this author, Chris Horner, an attorney for Government Accountability and Oversight, finds there is enough information to show that the NRDC had a hand in formulating the Obama administration’s approach to the Paris Agreement.

“Paris is a treaty according to all historical and common-sense considerations,” Horner says. “Pretending otherwise satisfies a publicly stated priority of the French hosts of the Paris talks, of the Obama White House and the Obama State Department, and of the NRDC, which emails suggest was the State Department’s adviser on this issue.”

Under Article II of the U.S. Constitution, the president can enter into treaties, but only with the “advice and consent” of the Senate and only if “two-thirds of senators present concur.”

After reviewing the FOIA records, Cohen concluded that the back and forth between the NRDC and the State Department demonstrate that the Obama administration received and accepted legal advice from green activists who were searching for a way to maneuver the U.S. into what was effectively a treaty while bypassing constitutional requirements. He credits President Trump for withdrawing from the Paris Agreement, but also expressed his concern that too many U.S. policymakers are slow to awaken to the dangers posed by green activists who are advancing policies that undermine the U.S. while benefiting China.

Horner is not impressed with the legal rationale State Department officials used to redact large portions of the correspondence. The exemption rule cited in the FOIA records protects information about individuals in “personnel and medical files and similar files” when the disclosure of such information would “constitute a clearly unwarranted invasion of personal privacy,” according to the Department of Justice’s description of Exemption 6.

He’s not buying the rationale because the sections of the released emails highlight the NRDC’s role in shaping the Paris Agreement. “They’re not saying it’s government information that we shouldn’t be privy to,” Horner explained. “What they’re actually saying is this collusion is none of our business but it is very much in the public interest.”

Of particular interest to Horner is the Circular 175 memo that Obama State Department used to enter into the Paris Agreement. This type of legal document outlines the legal process department officials use prior to a U.S. administration’s decision to join an international agreement or treaty. It is typically used as an action item by bureaus within the State Department to request authority from department leaders to “negotiate, conclude, amend, extend or terminate an international agreement.”

Whatever the memo said about the Paris Agreement, it reflected NRDC’s role and input and served as the justification for the Obama claim that an obvious treaty, adopted by all of our supposed models under their procedures for treaties as opposed to agreements, was actually not a treaty for U.S. purposes.

The NRDC, headquartered in New York, “is one of the nation’s largest environmentalist groups” and “has more than $180 million in assets to fund its programs,” according to InfluenceWatch.

Rhea Suh, the current president, previously worked as an assistant secretary for policy, management, and budget in Department of Interior during the Obama administration. Suh also had a hand in developing environmental initiatives for the David and Lucile Packard Foundation and the William and Flora Hewlett Foundation.

The NRDC is overloaded with attorneys and is not shy about saying so. The group’s website boasts:

In 1970, NRDC became America’s first litigation-focused nonprofit. . . . In 2006, we established a specialized team of litigating attorneys to bolster our trial expertise and target opportunities where courtroom pressure can have the biggest impact.

The fact that the NRDC is so lawyered up might help to explain why so much of the correspondence between Schmidt and Stern, and others, is concealed in FOIA documents.

World Resources Institute. The World Resources Institute, which operated as a conduit for Chinese interests, appears to have made the mistake of being more overt in its electronic communications with Team Obama. The tight personnel connections between government agencies and green pressure groups lend themselves to a smooth flow of communications.

After leaving the State Department, Stern went on to serve as a distinguished fellow with the WRI for a period of time, which is instructive. He’s no longer on staff, but the incestuous relationship between the WRI and State Department officials from the Obama era is instructive. So is the original FOIA request from the Institute for Energy Research (IER), a nonprofit group that favors free market policies in the energy sector.

The FOIA request dated June 26, 2018, asks for all correspondence between a list of State Department employees and someone named Jennifer Morgan. Morgan is currently the international executive director for Greenpeace, a position she has held since April 2016. Before that, she was the global director of the Climate Program at WRI. A press release from IER announcing its FOIA lawsuit describes her as a “green group lobbyist” with close ties to China’s National Center for Climate Change Strategy and International Cooperation (NCSC):

Public records indicate the Obama State Department leapt to assist WRI’s effort to aid the Chinese government even after being told precisely what the group had been asked to do and for whom. The requested records would shed further light on what that help constituted, and what role Ms. Morgan and WRI played on behalf of China’s government relevant to U.S. policy.

The records IER obtained in response to its FOIA lawsuit highlight a coordinated approach to climate change policy in which Morgan by her own acknowledgment operated at the behest and encouragement of Chinese officials.

In her message, Morgan describes how she was “approached” by a Chinese government entity to “pursue a dialogue” that would bring U.S. and Chinese officials together:

We think the interest stems from Chinese recognition that this Administration is coming to an end soonish and their desire to open up channels in DC that are additional to the ones that are working well now. As you will see, they are also interested in long-term ideas that one could imagine being discussed with the next Administration (depending of course who it might be).

Morgan even names some of the Chinese officials who could be in on the conversations.

In her April 2015 message, Morgan also tells State Department officials that her Chinese contacts were also looking for an opening to “share ideas around the Paris Agreement” and to recruit think tanks in the U.S. for the purpose of examining what “different approaches or packages could look like for Paris.”

WRI, a nonprofit based in Washington, DC, devoted to curtailing greenhouse gas emissions, has assets of more than $108 million, according to InfluenceWatch. James Gustave “Gus” Speth, a former law professor and U.N. administrator, is the founder and former president of the group.

In the next installment of “China’s Green Offensive,” identify which major environmental groups appear to have been acting as unreported foreign agents.