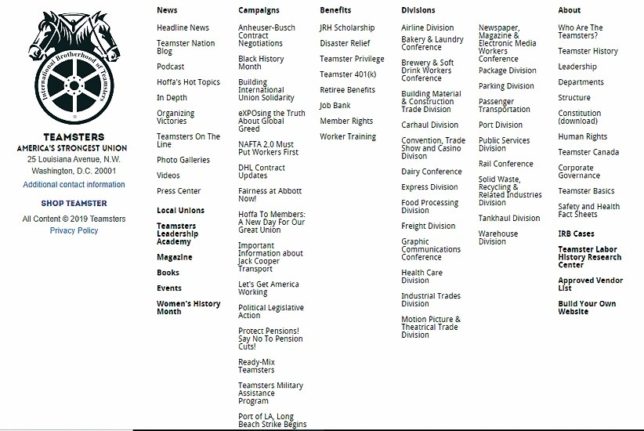 Of course, this was likely just a victory for secrecy. Even though the Wayne State Labor Studies Center, as seen in cyberspace, is no longer proudly promoting political assistance, the politics could still be happening offline. As noted above, the UMass-Amherst cousins are still brazenly participating in political behavior and boasting of it online.

Politicking aside, and assuming there is a valid reason for these programs, then who are they really for?

The Bureau of Labor Statistics showed 88.3 percent of all workers and 92.8 percent of us in the private sector worked at non-union jobs in 2018. Unions aren’t even needed in the small fraction of jobs where they do exist. As some of many examples, there are auto plants without the UAW and construction sites without the likes of the International Brotherhood of Electrical Workers and the Carpenters Union.

The American economy hummed along in 2018 with record low unemployment and strong GDP growth. Big Labor was overwhelmingly (and—arguably—totally) irrelevant to that prosperity. While denying or downplaying the political edges of labor studies programs, defenders will claim instead that they’re teaching union representatives skills such as how to negotiate collective bargaining contracts and navigate relations with employers. While that certainly occurs, it raises more important questions regarding why that task is done by public universities rather than the unions, and whether it needs to be done at all.

Why should almost 90 percent of us pay these schools to run programs none of us really need?

And for the 11.7 percent of us still forking over part of our paycheck to the union boss, does the strident left ideology of the labor studies centers really reflect what we want? In Michigan, CNN exit polls from the 2016 election showed 40 percent of voters living in a union household voted for Trump, with another 5 percent voting for Libertarian Gary Johnson. Nationwide, 42 percent of union household voters supported Trump.

Taking money from everyone, for training and politics arguably needed by no one, public university labor studies centers aren’t even fairly representing a big chunk of the people they claim to be serving. That’s why it’s difficult to stifle the ironic laughter when reading the slogan adorning the website of the University of Wisconsin School for Workers: “Education for Workplace Democracy.”

Founded in 1925, and claiming to be the “original university-based labor education program,” the University of Wisconsin School for Workers also has a history of favoring left-leaning politics under cover of an academic purpose. It had planned to sponsor an “Art in Protest” festival for March 2012 and feature the “art” produced by the furious demonstrators who occupied the state capitol grounds during the 2011 right-to-work protests directed at Republican Gov. Scott Walker and state lawmakers.

Deeming this to be a public university promoting angry left-wing political propaganda, a Republican state lawmaker pressured the School for Workers into cancelling it. A cartoonist working on the event declared the cancellation to be a “direct attack on freedom of speech, on freedom of expression, on academic freedom, and on labor education.”

Of course, freedom of expression wasn’t the issue as the festival could have been sponsored by Wisconsin’s labor unions or any number of other private organizations. The cartoonist’s assertion otherwise relies upon an unintentionally revealing assumption that the fires of left-wing union boss rage cannot survive without the oxygen provided by a taxpayer-supported labor studies center. There’s probably something to that: CNN exit polls for 2016 reported 43 percent of Wisconsin voters living in a union household voted for Trump.

In the next installment of Big Labor’s Academies, find about the ongoing political activism by University of California labor studies centers.