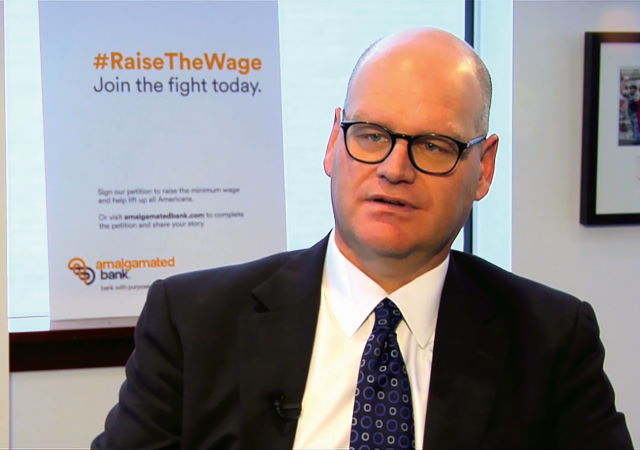 Amalgamated Charitable Foundation has ballooned its revenues by 8,890 percent since its creation, from revenues of $253,000 in 2017 to nearly $23 million in 2019. The 501(c)(3) is focused on providing donor-advised funds (DAFs) to left-leaning donors, and has rapidly become a top funding conduit for groups on the Left.

DAFs are a kind of charitable investment account. Individuals and organizations fund accounts with the DAF provider and immediately reap the tax advantages of donating to a tax-deductible 501(c)(3) nonprofit. Those funds are then managed by the provider until the original donor is ready to specify a final recipient—say, the Transgender Law Center—which receives a grant from Amalgamated Charitable, in exchange for a fee.

DAFs are designed to encourage smaller-dollar donors to participate in philanthropy, and they have numerous advantages over other philanthropic vehicles. They grew the charitable sector by as much as $13 billion between 2012 and 2019, according to the National Philanthropic Trust, a leading DAF provider. But they also serve as a major river of cash to politically active nonprofits, and give donors a large benefit: since grants can only be traced as far back as the DAF provider, not the DAF provider’s grantor, DAFs anonymize the original donors.

Between 2018 and 2019 Amalgamated Charitable paid out $11.8 million in grants this way to dozens of recipients, virtually all of which are politically active. Table 1 lists top recipients. 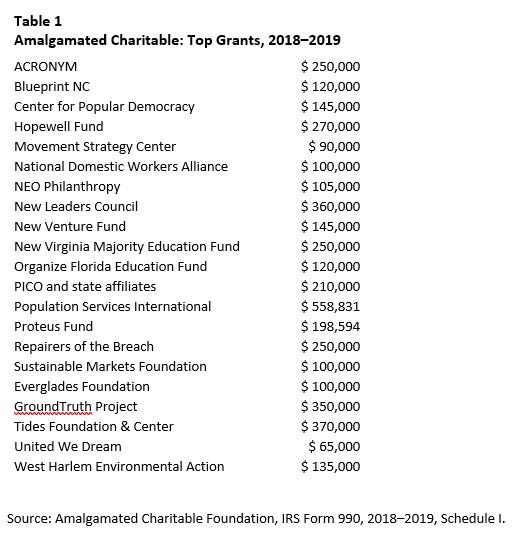 Who are the donors behind these grants? Because the funds were passed through Amalgamated Charitable (according to its Form 990 filings), they ultimately can’t be connected to specific grants. Table 2 lists top donors to Amalgamated. 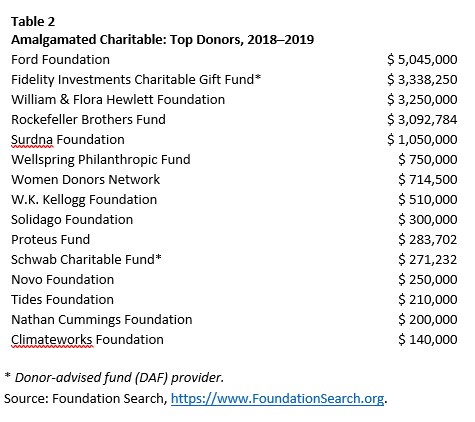 At least $3.6 million from other DAF providers—those associated with Charles Schwab and Fidelity Investments—has been pumped into Amalgamated Charitable, adding yet another layer of obscurity to the money flow. The Ford, Surdna, Wellspring, and Hewlett Foundations—all major left-wing institutional donors—have also passed millions of dollars along to Amalgamated Charitable.

That might raise some eyebrows given that donations to the DAF provider can help satisfy these foundations’ IRS requirement to pay out at least 5 percent of their total assets each year. Funds parked in DAFs don’t have to be moved out right away, meaning that foundations can simply warehouse cash in another nonprofit not subject to payout requirements for years with no penalty—a reality criticized by observers on the Left.

A handful of grants from these donors specify the kinds of politically activated projects they were intended to support, such as “Way to Rise—LatinX Power Project,” “Cities and States—Civic Participation,” and “Collaborative on State-Based Power-Building.”

Most Americans would probably agree that it’s difficult or impossible to separate “civic participation,” code for voting in elections, from politics. But these foundations use pass-throughs like Amalgamated Charitable to pursue what they really want—political outcomes—in the name of “philanthropy.”

In the next installment, Amalgamated Charitable launched an aggressive campaign to curb donations to “hate groups.”