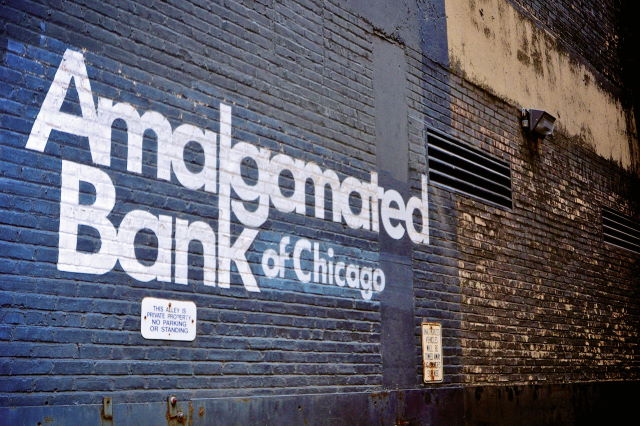 In September 2021, Amalgamated announced a $98 million acquisition of the similarly named Amalgamated Bank of Chicago, which was formed in 1922 by the same clothing workers union that formed the New York–based Amalgamated Bank. Credit: tyle_r. License: https://bit.ly/3kiXVyJ.
by Robert Stilson, Hayden Ludwig

Summary: Few entities embody the symbiotic relationship between American organized labor and the Left better than Amalgamated Bank. With a client list that includes some of the biggest political players in the country, Amalgamated has branched out to involve itself in everything from nonprofit grantmaking to corporate environmental, social, and corporate governance (ESG) activism.

Bank with Amalgamated and you bank with the Left. Amalgamated Bank is the country’s largest union-aligned (formerly union-owned) bank and a keystone for professional activists. The institution dates back decades, and since 2010 has largely operated under the banner of Workers United, a division of the Service Employees International Union (SEIU), one of the most politically active unions in America. This position has afforded the bank access to in assets and $57 billion in managed funds—much of it from union pension funds. Though Amalgamated is now a publicly traded company, Workers United still owns approximately 40 percent of the bank’s equity.

The financial reports of left-leaning political action committees (PACs) and nonprofits are replete with fees paid to Amalgamated, which has impressively sewn up much of the institutional Left—while providing activists and unions with a permanent money pot.

Amalgamated is explicitly mission-driven and “socially responsible,” using activist investing to push policy. “We don’t just have a mission,” the bank boasts, “we are on a mission: to support those who support others, to invest in progressive and impactful causes and to advocate true financial opportunity for all.”

It has grown rapidly, too. In 2018, Amalgamated acquired New Resource Bank, a San Francisco—based lender that profited from using the 2011 Occupy Wall Street protests to draw in liberal customers from bigger competitors by touting its “green” commitments. In September 2021, Amalgamated announced a of the similarly named Amalgamated Bank of Chicago, which was formed in 1922 by the same clothing workers union that formed the New York—based Amalgamated Bank. The acquisition will add another $950 million to the bank’s assets.

And in 2017, the Bank of the Left entered the nonprofit world by spinning off Amalgamated Charitable Foundation to channel vast contributions from left-leaning donors to their favorite political causes—including a campaign to snuff out donations to mainstream conservative organizations by labeling them “hate groups.”

How Did We Get Here?

So how did the Left end up with a powerful bank dominated by Big Labor? Here’s the short answer.

Amalgamated takes its name from the Amalgamated Clothing Workers of America, which formed the bank in New York City in 1923—a more common phenomenon back then than it is today. A series of mergers led the clothing workers to rebrand as UNITE. In 2004, UNITE merged with another union—HERE—to form the peculiarly named UNITE HERE, which soon withdrew from the AFL-CIO for political reasons to join a competing federation called Change to Win headed by the SEIU and the Teamsters.

But all was not well in the marriage. In the late 2000s, UNITE HERE lost control of the bank to the SEIU under its associated Workers United division as UNITE HERE itself broke up. UNITE HERE subsequently rejoined the AFL-CIO, while Amalgamated nearly collapsed during the 2008 financial crisis after writing off $150 million in subprime mortgages. It was only saved after Wilbur Ross—later President Donald Trump’s Secretary of Commerce—and investor Ron Burkle pumped $100 million into the bank in exchange for a 40 percent stake.

Amalgamated went public with an initial public offering in 2018. In 2021, it reorganized under the holding company Amalgamated Financial Corp., becoming the first publicly traded bank to structure itself as a public benefit corporation and allowing it to prioritize objectives other than generating value for its shareholders. Public benefit companies are permitted to pursue social objectives even at the cost of financial returns.

Today, Amalgamated is the largest manager of union pension funds in the United States. Its client list includes not only unions like the American Federation of State, County and Municipal Employees (AFSCME), the SEIU, and the United Federation of Teachers, but also politically active nonprofits like the League of Conservation Voters, America Votes, Color of Change, and Demos. It has served the Democratic National Committee, the Democratic Governors Association, and numerous Democratic PACs and campaigns.

In the next installment, Amalgamated Charitable Foundation rapidly become a top funding conduit for groups on the Left.