ACORN’s Legacy Lives On in the Sixteen Thirty Fund

Documents recently obtained by the Capital Research Center shed more light on the hazy origins of the Sixteen Thirty Fund, a mega-lobbying group that Politico has labeled a “massive ‘dark money’ group [that] boosted Democrats in 2018.”

According to its initial filings with the IRS in February 2009 (archived here), the Sixteen Thirty Fund—the 501(c)(4) advocacy arm of Arabella Advisors’ “dark money” empire—was seeded with over $350,000 from five major left-wing groups: ACORN, Americans United for Change, the Sierra Club, USAction, and Working America. 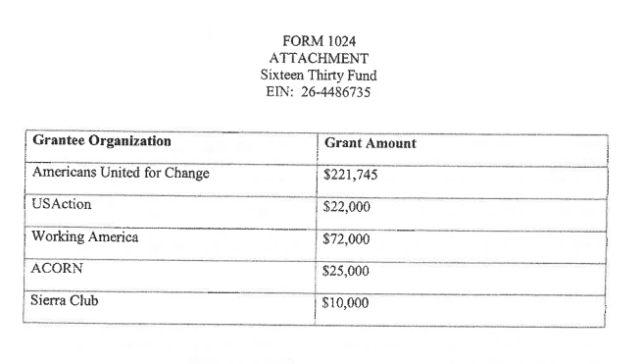 The corrupt and thankfully now defunct ACORN (Association of Community Organizations for Reform Now) shut its doors in 2010 after Congress severed federal funding to the group following revelations by undercover conservative activists that ACORN employees had offered them advice on running a prostitution ring. ACORN was infamous as a machine for churning out likely Democratic Party votes in large part by paying employees bonuses for every voter registration they made. In 2008, the group claimed to register 1.3 million new voters—of which some 900,000 were thrown out as invalid by election officials. As the New York Times put it, the tally was “vastly overstated.”

The Times’ understatement aside, by 2010 at least 18 ACORN employees were convicted or had confessed to voter registration fraud, and the group was under investigation in 11 states. Stripped of federal funding, ACORN declared bankruptcy in November 2010.

Then there’s Americans United for Change (AUFC), a group so furtive even the left-leaning Sunlight Foundation has called it a “dark money group” for its quiet support of Democrats and left-wing causes. AUFC is as secretive as they come; the multi-million-dollar group doesn’t even have a website. It was birthed in 2005 during the Left’s fight against President George W. Bush’s efforts to reform Social Security, later expanding to broader efforts to aid Democrats on illegal immigration and minimum wage hikes, among other issues.

Like ACORN, AUFC is wreathed in scandal. During the 2016 election, Project Veritas—headed by the activists who exposed ACORN in 2009—covertly recorded AUFC field director Scott Foval revealing that the group had hired homeless people and the mentally ill to provoke violence at Trump rallies. Foval organized his anti-Trump deception with the felon and veteran Democratic strategist Bob Creamer, who was indicted in 2005 on 16 charges of tax violations and $2.3 million in bank fraud. Creamer’s firm, Democracy Partners, may have aided AUFC in bypassing campaign collusion laws with the Clinton campaign.

Creamer and Foval’s efforts coalesced into a nationwide campaign of fake anti-Trump protests designed to make the Republican nominee’s supporters appear violent. Take Shirtley Teeter, a 69-year-old lifelong protester hired by the group to infiltrate a Trump rally in North Carolina. When Teeter was punched by a Trump supporter, the media relished the opportunity to expose Trump’s backers as violent savages. “She was one of our activists,” according to Foval.

You may be familiar with Sixteen Thirty’s other seed funders. Working America is the get-out-the-vote arm of the AFL-CIO and is heavily funded by the union federation. The Sierra Club, a Green New Deal supporter, is the oldest environmentalist group in America. And USAction—now People’s Action—is a spin-off created by activist Ralph Nader and a key founder of Health Care for America Now, the campaign formed to pass Obamacare.

The Sixteen Thirty Fund, along with its three “sister” nonprofits, is run from the Washington, DC, headquarters of Arabella Advisors, a for-profit consultancy founded by former Clinton administration staffer Eric Kessler. Arabella specializes in renting out its four nonprofits to other major groups on the Left, which pay Arabella to host hundreds of “pop-up” groups—websites that are made to look like genuine activist organizations with an axe to grind, but that are really just line items in Arabella’s budget.

Arabella’s brand of fake activism pays well. In 2018, Arabella’s groups reported combined revenues of $635 million, an increase of $54 million over its 2017 figures.

Read our full report  and video on Arabella Advisors, the “dark money” ATM of the Left.

To put that in perspective, that single-year increase is equivalent to the entire 2017 revenues of the much-bemoaned Bradley Foundation, a conservative funder.

These fake groups attack conservatives on virtually every issue, from protesting the nomination of Brett Kavanaugh to the Supreme Court (even before his name was announced as Trump’s pick) to running $4 million in Facebook political ads to getting out likely Democratic Party voters to hosting pro-impeachment rallies outside the U.S. Capitol.

If nothing else, this revelation puts to bed any claim that the Sixteen Thirty Fund isn’t a gun-for-hire for the professional Left paid for to push its agenda.