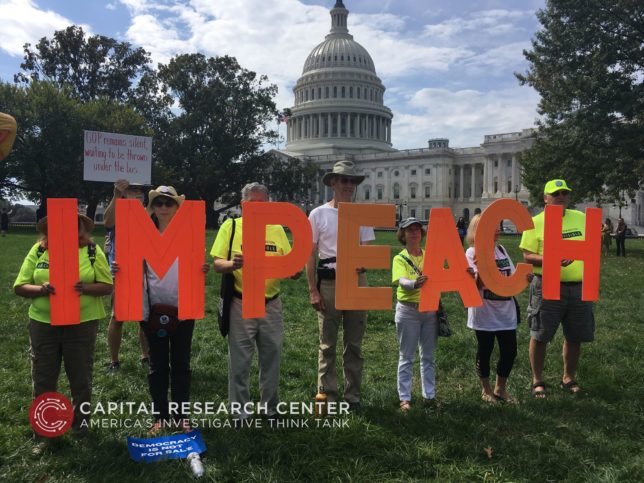 On September 26, the U.S. Capitol was the site of a pro-impeachment rally “Impeachment Now!” against President Donald Trump and featured activists from about 18 other liberal-leaning organizations. The rally was organized in response to recent claims that in July President Trump asked Ukrainian President Volodymyr Zelensky to investigate Democratic presidential candidate Joe Biden as well as his son, Hunter Biden.

Capital Research Center documented the event, where protesters chanted “impeach now” and “this is what democracy feels like.” Visuals spotted during the rally included a large “Impeach” banner, a Trump figure wearing a jail uniform, and signs including one stating “We will Fight to Save the Democracy Trump Destroyed,” and a sign with an abbreviation of TRUMP: “Traitor, Republican, Useful idiot, Manchurian candidate, Putin’s puppet.”

A speaker from Demand Justice, a left-wing judiciary activist group, argued that President Trump “doesn’t believe in rules and he doesn’t believe in the law. He would continue to say, “we need this impeachment inquiry, and we need this impeachment now.” Demand Justice was recently identified as a project of Sixteen Thirty Fund, a lobbying group and part of a half-billion-dollar “dark money” network controlled by the left-wing consulting firm Arabella Advisors.

MoveOn, a George Soros-funded activist group, was one of the main organizers of the rally. MoveOn event coordinator Reggie Hubbard said “we have a president who is willing to extort a foreign leader into interfering in a U.S election, again, for his own personal gain.”

Speakers included controversial Rep. Ilhan Omar (D-MN), who told the crowd, “Our focus must remain always on the facts, and the fact is that this president is corrupt.” Rep. Rashida Talib (D-MI) called Trump “a dangerous person to our country.”

Alexandra Floris-Quilty, co-founder of the advocacy group By the People, said, “Every day that Donald Trump is in office is a dangerous day for our democracy and for the American people . . . Our movement forced the House of Representatives to advance impeachment proceedings. This is our victory.” By the People is a left-leaning advocacy group with the goal of impeaching President Trump.

You can learn more about the activist groups CRC identified that were present at the rally as well as helping sponsor the event by clicking on their InfluenceWatch profiles: