Democrats Get Out the Vote with Arabella Advisors’ “Dark Money” 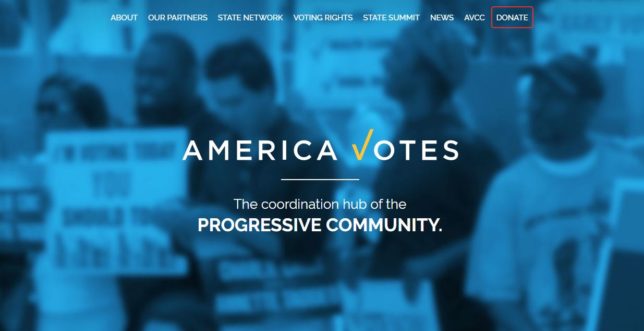 When most Americans think of charity, they picture alms for the poor, food for the hungry, or medicine for the needy—not election lawsuits.

Yet under IRS rules nonprofits may spend gobs of cash litigating against Republican-drawn congressional maps in the hopes of redrawing them to favor Democrats. That’s the specialty of groups like America Votes, a hub for coordinating the Left’s get-out-the-vote (GOTV) electoral activities—with funding from secretive “dark money” groups.

And that’s considered a “charitable” act by the IRS, by the way, so long as tax-exempt nonprofits like America Votes don’t engage in partisan efforts—that is, overtly supporting members of a political party.

But if there’s any doubt that America Votes was always intended to aid Democrats with a wink and a nod, consider its founding leadership. The current head of America Votes, Greg Speed, is a former staffer at the Democratic Congressional Campaign Committee, a group whose sole purpose is to elect Democrats to the House of Representatives; its founding president was Anne Bartley, a former aide to First Lady Hillary Clinton and a wealthy Democratic donor involved in founding numerous prominent leftist organizations, including the Democracy Alliance.

The group’s board is a true who’s-who, including at one point or another Doug Phelps, head of the an activist behemoth the Public Interest Network; Gene Karpinski, president of the League of Conservation Voters; future Planned Parenthood president Cecile Richards; Center for Community Change director Deepak Bhargava; Working America head Karen Nussbaum; AFL-CIO political director Michael Podhorzer; and Rob McKay, chairman of the Democracy Alliance.

Speaking of the Democracy Alliance, it’s no surprise that America Votes is an original member of that shadowy collective of mega-funders and influencers, who meet annually to coordinate spending on left-wing infrastructure. In fact, the Democracy Alliance even praises America Votes as “the common link between many of the largest and most influential issue and membership organizations in the country.”

The Democracy Alliance exists to funnel members’ money into America Votes and likeminded causes, and it’s clearly worked: according to its most recent IRS filing in 2017, America Votes reported an impressive $13.4 million in grants from other groups.

So who’s funding it?

One of its larger contributors is the New Venture Fund, flagship of the half-billion-dollar “dark money” empire controlled by Arabella Advisors, a Washington, D.C.-based consultancy and puppet-master for some 340 phony activist groups.

Interestingly, Priorities USA Foundation—the fundraising arm of the Democratic PAC Priorities USA—made a single grant in 2017, its first year of operation: $50,000 donated to the New Venture Fund, with a grant description indicating the funds were intended for America Votes, a 501(c)(4) lobbying group.

Worth noting: both Priorities USA Foundation and America Votes share an interest in litigating away Republican-drawn congressional maps. According to the former’s 2017 IRS filing, it was “established to fund pending and future litigation to protect full access to the ballot and create district boundaries that restore and protect the voting strength of all U.S. citizens”—a mission that sounds awfully similar to that of America Votes.

The two groups also share Greg Speed, who is both president of America Votes and treasurer for the Priorities USA PAC (though he’s not on the board of the grantor, Priorities USA Foundation, a separate organization from the PAC).

But that’s not all of the money that’s passed through Arabella Advisors on the way to America Votes. On November 19th, the left-leaning Politico examined 2018 spending by the Sixteen Thirty Fund—Arabella’s in-house 501(c)(4) lobbying arm—and found a $27.2 million grant it made to America Votes, according to its 2018 IRS filing.

“That grant by itself was nearly twice the amount America Votes had ever raised in a single year ($14.2 million),” Politico observed.

Of course, what it didn’t notice (or apparently ask about) is the much larger “dark money” network the Sixteen Thirty Fund is just one part of. In 2018 alone, Arabella Advisors’ four in-house nonprofits reported total revenues topping $635 million, according to their 2018 IRS filings obtained by the Capital Research Center (available at InfluenceWatch).

That’s an increase of almost $54 million over the already impressive $582 million Arabella’s groups brought in altogether in 2017.

For anyone counting, that’s a single-year increase equivalent to the entire 2017 revenues of the Lynde and Harry Bradley Foundation, the “powerful” and “secretive” conservative bogeyman so reviled by the Left.

Those numbers paint a striking picture. The Left runs a massive voter mobilization effort funded by huge “dark money” special interests, and it’s all done under the banner of charity.