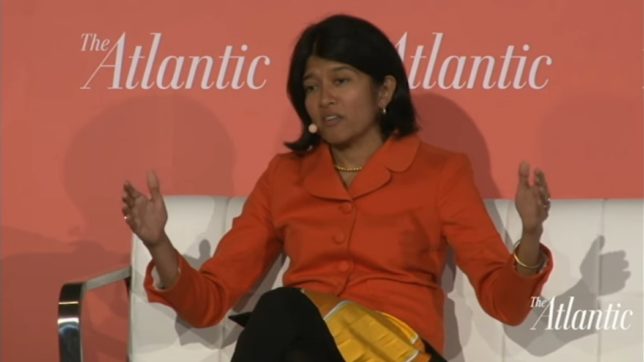 Sampriti Ganguli, outgoing CEO of Arabella Advisors, at a corporate responsibility summit in November 2017, being interviewed by Steve Clemons, The Atlantic. Credit: The Atlantic/YouTube.
by Hayden Ludwig

The “dark money” network created and run by Arabella Advisors is perhaps the most powerful and, until recently, the least-reported-on player in Washington politics. In a scant five years, this kraken grew its revenues an incredible 405 percent, from $332 million in 2015 to nearly $1.7 billion in 2020. That includes doubling its income since 2019.

Tracing the Arabella network’s donors is tricky. The IRS does not require 501(c)(3) nonprofits to disclose their donors, only the amounts donated, as part of Americans’ free speech rights under the First Amendment to the Constitution.

But three of the four “sisters” in this “dark money” family rely heavily on foundation grants to fund their political activities, which includes funneling money from wealthy philanthropies to the controversial leftist causes they’d rather not be directly associated with.

To date, we’ve traced $356 million in grants to Arabella’s three in-house (c)(3) groups from a handful of major left-of-center donors. While most of the grants we’ve uncovered don’t specify which cause they were intended to support, some shine a light on how these foundations used Arabella’s nonprofits as a pass-through to fund overtly political activities.

The Bill and Melinda Gates Foundation is the single largest donor to Arabella groups yet identified, weighing in at close to $456 million since 2008, including $127 million in 2020 alone.

The Ford Foundation gave Arabella’s nonprofits $25 million in 2020. Many of its grants specify public health and education as their targets, yet even these philanthropic-sounding purposes are focused on political advocacy, “social justice,” and “narrative change.”

One Ford Foundation grant provides funding for the “Ohio Transformation Fund to promote criminal justice reform and civic engagement,” code for voter registration and turnout. Another funds “state policy advocacy, civic engagement, and strategic communications” for the All Above All Reproductive Justice Coalition, an Arabella front that lobbies to overturn the Hyde Amendment barring the federal government from using taxpayer funds to pay for abortions in most circumstances. The group also wants to legalize mail-in abortifacients for terminating pregnancies up to 10 weeks, particularly among African Americans and minorities.

Another $700,000 from Ford Foundation paid for “education and training for grassroots organizations to increase engagement . . . in state redistricting.” The redistricting process is inherently political because it involves lawmakers vying for legislative maps that favor their political party. What business does the tax-exempt Ford Foundation, which is barred from substantial political activity, have meddling in 2022’s biggest political fight?

The Rockefeller Foundation, a pillar of the Left, gave Arabella’s empire another $15 million, though specifics are unclear.

The Susan Thompson Buffett Foundation gave roughly $28 million to Arabella’s nonprofits in 2020. Given that the foundation is Warren Buffett’s chosen vehicle for moving billions of dollars into the pro-abortion camp, it’s likely that this money supported pro-abortion groups.

Few have heard of the Gordon and Betty Moore Foundation, but it’s one of the biggest funders of environmental activism in America. It’s also a top Arabella donor, gifting $22 million to the network last year alone. Most of this money funded climate- and conservation-related causes, including $12.8 million for the creation of a “finance hub” to push awareness of “natural resource risk among financial institutions.” The goal is to push global warming as a key component of lenders’ risk assessment in order to forcibly move Western economies to a zero-carbon future—the eco-Left’s plan for reshaping the world in its own misanthropic image.

The William and Flora Hewlett Foundation—created by the co-founder of Hewlett-Packard—moved $12 million to the Arabella empire in 2020. A $1 million grant went to fund the Trusted Election Fund, which I’ve documented as created by Big Philanthropy to help Democrats oust President Donald Trump and silence criticism of the 2020 election’s gaping integrity issues.

Similarly, we’ve traced $950,000 from the David and Lucile Packard Foundation, the philanthropy of Hewlett-Packard’s other co-founder.

In keeping with retail brands, the W.K. Kellogg Foundation (of breakfast cereal fame) gave roughly $2.5 million to Arabella’s groups last year while the Robert Wood Johnson Foundation—named for the son of a Johnson & Johnson co-founder—donated another $8 million.

Finally, we’ve uncovered $10 million flowing to the Arabella network from the Silicon Valley Community Foundation and nearly $120 million from the Fidelity Charitable Gift Fund. Both of these nonprofits are donor-advised fund providers, which means that their grants ultimately came from unnamed donors using these providers as pass-throughs. Interestingly, New Venture Fund, Arabella’s flagship 501(c)(3), received Fidelity Charitable’s second-largest grant in its Form 990 filing.

All of this points back to the argument we made in our first report on the Arabella network in 2019, when it was (just) $600 million strong: When left-wing donors want to quietly fund political advocacy, they turn to Arabella Advisors.

That network sent almost $174 million in 2020 to America Votes, a massive get-out-the-vote operation targeting Democratic voters. Is that charity?

It gave $25 million to the Center for Tech and Civic Life, which repackaged the money as grants to government elections offices nationwide in order to privatize the 2020 election in battleground states—is this a new form of progressive charity?

The Farce Is Over

But even the Left isn’t buying that line anymore. In a recent interview Ganguli defend her obscure, supposedly purely philanthropy-focused company in The Atlantic, which is hardly friendly to conservatives.

Here are some highlights:

Green [Interviewer]: I saw in your 2020 impact report that you frequently work on “civic engagement” projects—you gave something like 530 grants to 290 grantees on issues like “voter protection” and efforts to “defend democracy.” You might call that work political, with a little p. . . . Why should people with a lot of money be able to do this anonymously?

Ganguli: There are a lot of actors involved in changing American civic life. I just have to be honest with you: You’re zooming in on such a small part of what Arabella Advisors does. I’m struggling with your question.

Green: But you guys sit in that progressive universe. . . . How do you hold those ideas in your head at the same time? You spend your days serving the interests and needs of billionaires. Also, theoretically, you’re part of a progressive world that thinks that’s wrong and unjust.

I wonder if you think it is okay for groups like this to be able to operate under the cover of darkness.

Ganguli: That is what the law allows for. When the laws change, we will make sure we are perfectly compliant with them. Projects and donors have every opportunity to share publicly what they do and don’t do. It’s not incumbent on Arabella Advisors to opine on what that should be.

Keep in mind that Arabella’s North Fund and Sixteen Thirty Fund lobbies Congress for forced donor disclosure through the Democrats’ For the People Act (H.R. 1).

With enough prodding, Ganguli eventually admitted that Arabella is basically the Left’s equivalent of the libertarian Koch brothers:

Green: You both take advantage of similar legal structures, federal regulations, and the ability to put lots of money toward politics, little p. They just work on the opposite side, for opposite causes. Do you feel good that you’re the left’s equivalent of the Koch brothers?