Whither the Soros Foundations – After Soros? Part Three 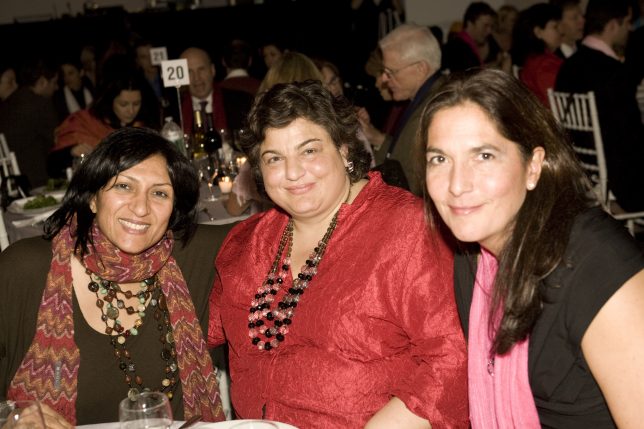 Andrea expressed her discomfort with the term “philanthropist” and its literal meaning of “lover of humanity,” since, she said, "...there are lots of people who give away money who don’t actually like people very much, let alone love them." Credit: Acumen. License: https://goo.gl/SE2He4.
by Neil Maghami

Having decided to allow the Open Society Foundations to survive me, I have done my best to prepare them for my absence. But it would contradict my belief that all human constructs are flawed if I had fully succeeded. Therefore, I bequeath my successors the task of revising any of the arrangements I shall leave behind in the same spirit in which I have made them.

In the event of George Soros’ eventual demise, who will provide the high level oversight over the foundations that once came from its famous founder? Some observers assume that one or more of his five children will step up. Let’s get acquainted with the next Soros generation and then consider the likelihood of their involvement.

Born in 1985, he is the second-youngest child of George Soros. According to his website, alexsoros.com, he is “currently at work on his Ph.D. thesis work of history and philosophy entitled “Jewish Dionysus: Heine, Nietzsche and the Politics of Literature,” while attending the University of California at Berkeley.

As one would expect from the son of his outspoken father, Alexander Soros’ website includes links to his published articles, with titles on “progressive” topics like “Stop drowning the Amazon,” “Look How Far Ukraine Has Come Since the Babi Yar Massacre,” “Ridding the US marketplace of tainted timber,” “How Hillary Clinton wins Florida and the Jewish vote” and “Willing to pay the ultimate price to protect animals.”

Of note: Michael Vachon, George Soros’ long-time spokesman, is listed as a director of the Alexander Soros Foundation on its 2016 990 form.  Vachon’s connection with Alexander Soros may serve another purpose beyond simply advising on grants: Alexander Soros’ image has undergone a media makeover in the last few years, as he had been pegged as the rich playboy type. Alexander’s media appearances have become much more polished and highly controlled—in other words, he’s being successfully handled.

As a board member, Soros is active with the Global Public Policy Institute in Berlin; Bend the Arc; Global Witness; and, of course, with the Open Society Foundations, where he serves as a member of the Global Board.

As CRC’s Jacob Grandstaff noted in September 2017, in 2017 Alexander Soros donated approximately $152,000 to various political committees and campaigns – including $33,900 to the Democratic National Committee. At one point, the younger Soros’ 2017 political giving had exceeded his father’s by about $40,000.

Taking a page from her father’s playbook, the only Soros daughter has not named her foundation after herself, rather, she calls it the “Trace Foundation.” In 2014, it reported net assets of just over $337,000. Trace’s work focuses on promoting the survival of Tibetan culture. It funds scholarships for Tibetan students, provides money for “production and distribution of Tibetan films” and the “preservation” of historically significant Tibetan buildings. Trace also maintains the Latse Library, “a premier research library dedicated to modern Tibetan studies” located in New York City.

Soros Columbel is associated as well with the Acumen Fund, a tax-exempt organization based in New York with net assets of $112 million according to its 2016 990 form. Acumen provides what it calls “patient capital” to support groups and activities working to reduce global poverty. She served on Acumen’s board from 2005 to 2014, and rejoined the board in 2017. She also serves as a member of the Open Society Global Board.

A 2013 speech by Soros Columbel to a gathering of Acumen backers posted to YouTube gives us some insight into her prickly approach to philanthropy. She expressed her discomfort with the term “philanthropist” and its literal meaning of “lover of humanity.”

Soros Columbel commented: “I’ve never really liked this term; it seems very self-important and frankly not very accurate, since there are lots of people who give away money who don’t actually like people very much, let alone love them.”

Regarding Soros Columbel’s politically-oriented giving, the Washington Times reported that, along with her father and brother, she had collectively contributed $245,000 to J Street—a left-leaning Jewish political advocacy organization that positions itself as a progressive alternative to the more mainstream American Israel Political Action Committee (AIPAC.)

The youngest Soros son and an aspiring artist, Gregory has not as of yet made his mark as a philanthropist and does not appear to be associated with any tax-exempt foundations.

George Soros’ eldest son, Robert is listed as sole trustee of the Enterprise Foundation (net assets of $5.3 million, going by 2014 990 form), which, notably, donated $400,000 to the Open Society Institute that year. A 2012 profile of the Soros children posted to Forward.com noted that “Robert Soros, George’s eldest son, and Gregory, his youngest, have been less publicly philanthropic than their siblings.”

In June 2017, Robert announced he would start his own investment firm and that he was resigning from his long-time role with Soros Fund Management, founded by Soros, Sr.

As one would expect, this son of Soros also has his own foundation, the Jennifer and Jonathan Allen Soros Foundation, which disclosed net assets of more than $153 million in its 2015 990 form. Donations that year included $1.25 million to New America Foundation; $50,000 to the Brennan Center for Justice; $518,000 to Planned Parenthood of America. (Of note: Jonathan’s wife, Jennifer Allen Soros, has been a Planned Parenthood supporter for many years, going back to a summer internship with the organization.)

In 2014, the Jennifer and Jonathan Allen Soros foundation gave $1 million to the shadowy Tides Foundation – and $10,000 to the Acumen Fund, which is linked to his sister Andrea as noted above. Jonathan Soros is a member of the Open Society Global Board. Like his brother Robert, Jonathan has also been active for many years with Soros Fund Management; he subsequently set up his own financial operation, JS Capital Management, after leaving the family firm in 2012.

According to CampaignMoney.com, Jonathan Soros’ political donations have been considerable – nearly $167,000 in 2016; $1.7 million in 2014; $857,000 in 2012; nearly $120,000 in 2010. And, as CRC’s Matthew Vadum has reported previously, Jonathan Soros has been active with the shadowy “Democracy Alliance” – a collection of millionaires and billionaires drawing from Hollywood (think Harvey Weinstein), Silicon Valley and the financial sector who back far-left Democratic political candidates. (See Vadum’s October 2014 edition of Foundation Watch, “The ‘Vast Left-wing Conspiracy.’”)

In the final installment of “Whither the Soros Foundations – After Soros?” we expose Soros’ work undermining democratically elected governments in Israel and elsewhere under the guise of spreading “democracy.”