When the Left Becomes Management 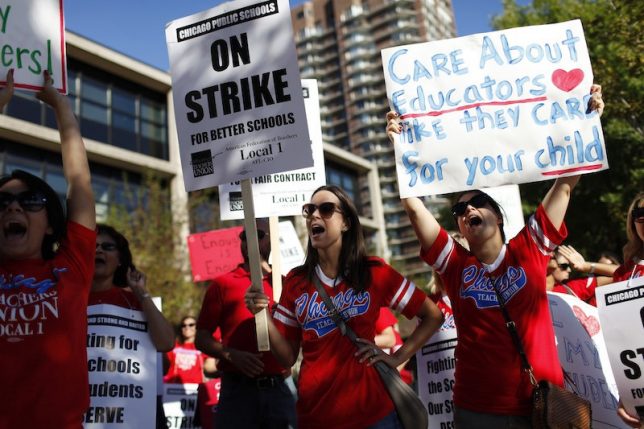 Liberal groups—many of which, unsurprisingly, take substantial funding from labor unions—often advocate strongly for the interests of labor unions. For one example, see the recent Sanders-Pocan proposal to hand labor unions just about every organizing priority they have requested over the past 70 years. But what happens when liberal groups are on the other side of the table, negotiating with their own employees? Three recent stories, from a local Planned Parenthood clinic in Colorado, the National Education Association, and a Democratic Congressional campaign in Florida clearly show that while the Left may shill for unions in public, they bargain just as hard against them as the most decadent free-market capitalist.

Planned Parenthood of the Rocky Mountains, the franchise of the national abortion clinic federation operating in Colorado, is currently fighting against a union organizing attempt by the Service Employees International Union (SEIU) Local 105. After the Planned Parenthood employees voted to unionize in a federally supervised election, the clinic filed a National Labor Relations Board petition to overturn the result on the grounds that the bargaining unit designation was improper, a conventional tactic of the losing side in a unionization election.

This prompted much shock and horror from left-wing supporters of Planned Parenthood, who were beside themselves that a member of the core left-wing infrastructure would resist its employees’ attempt to form a union. They should not have been surprised: The left-liberal organizations Media Matters for America, Vox Media, and Council on American-Islamic Relations have all faced allegations of resisting efforts at unionizing their employees.

And when the professional Left does manage to unionize itself, the results are predictable to anyone familiar with tough private-sector labor relations approaches. The National Education Association, America’s largest government worker union, narrowly averted a staff strike this week. The union, anticipating a possible Supreme Court ruling outlawing forced agency fees for government workers, has engaged in “right-sizing”—corporate consultant-speak for “buyouts, layoffs, and budget cuts”—because the union expects its revenues to fall precipitously when teachers, who were previously forced to submit to NEA “representation” by law, cease to pay for the union’s monopoly privileges. That led the NEA Staff Organization, the union of union staffers, to threaten a strike; an agreement was reached shortly after the strike was to have begun.

It was a similar story down in Florida. A Congressional candidate who vowed to “oppose efforts that are anti-union or that weaken the ability to organize and bargain collectively” laid off eight staffers after his staff joined the Campaign Workers Guild, a recently formed union for left-liberal campaign staff. The campaign argued that the layoffs were necessary as a cost-containment measure after a change in strategy, which echoes the experience of a number of for-profit employers who have had to restructure their operations after a unionization effort.

Left-liberals love talking about the benefits of unions to workers. But their negotiations with the unions of their own staff show the drawbacks of the labor policies that their organizations claim to support.

Banking with the SEIU to Fund a Radical Anti-Immigration Republican?