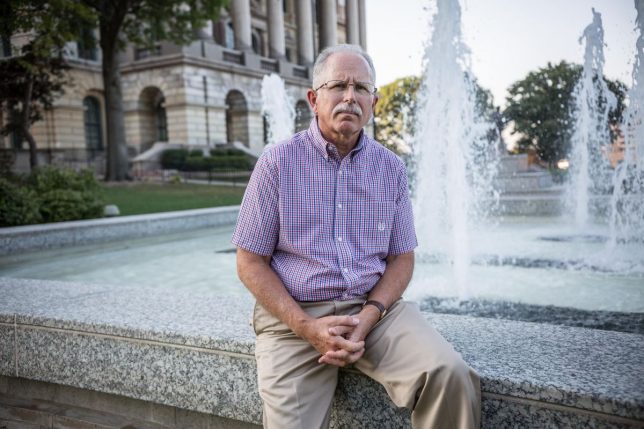 The U.S. Supreme Court has decided it will take up a case that could prove to be a game-changing decision for government worker labor unions. If the court rules against Big Labor in Janus v. AFSCME, up to five million government workers will be able to opt out of paying union dues – substantially restricting the financial and political clout of major public sector labor unions such as the American Federation of State, County, and Municipal Employees (AFSCME).

Mark Janus, a child support specialist with the Illinois Department of Healthcare and Family Services, says he took his job in order to help children. “But just because I care about kids,” he wrote last year in the Chicago Tribune, “doesn’t mean I also want to support a government union.”

To keep my job at the state, I have to pay monthly fees to … AFSCME, a public employee union that claims to “represent” me. But for the first time in my many years as a public employee, I have hope. Next week, the U.S. Supreme Court will hear oral arguments in the case Friedrichs v. California Teachers Association.

If Friedrichs wins her case, it would mean freedom for government workers like me. Freedom to choose whether we want to belong to or financially support a union in our workplace.

That case in 2015-2016 pitted Rebecca Friedrichs, a schoolteacher from Orange County, California, against the Golden State’s most powerful labor union and largest lobbyist, the California Teachers Association (CTA). Friedrichs cited her First Amendment right to free speech and free association, calling into question a 1977 Supreme Court decision that allows public sector unions to demand “agency fees” from non-members in exchange representation in issues like collective bargaining. (Unions demand the privilege of “exclusive representation” to enhance their clout; the price of the privilege is representing non-members in bargaining.) Teachers and other government employees in states like California and Illinois are required to pay hundreds of dollars in union fees each year, and their money goes to support political causes they may disagree with. In Friedrichs’s words,

[All] we’re asking for is … for teachers to be able to decide for ourselves—without fear, and without coercion—whether or not to join or fund a union. It’s that simple; something that the Supreme Court has allowed to most Americans.

The plaintiffs in Friedrichs failed in a 4-4 split between the Supreme Court justices, and the decision of the lower court (which ruled against Friedrichs) stood. (It is widely believed that Justice Antonin Scalia would have supported Friedrichs had he not died in February 2016, before the case was decided, resulting in the tie.) But with Justice Neil Gorsuch sworn in as Scalia’s successor, the plaintiffs in Janus appear likely to prevail against Big Labor. Recent precedent favors Janus: In the 2014 case Harris v. Quinn, the Supreme Court refused to extend its pro-union 1977 ruling to home health care aides paid by state Medicaid programs to take care of individual patients. The Freedom Foundation—a free market think tank—used the Harris decision to inform nearly 29,000 of these health care aides in union-controlled Washington and Oregon about their right not to join or pay dues to the Service Employees International Union (SEIU); 11,399 opted out. Their efforts cost the SEIU nearly $400,000 in lost revenues in May alone (almost $4.8 million annually), according to the Freedom Foundation’s estimates.

Union bosses are predictably miffed. A Minnesota affiliate of the National Education Association, a massive teachers union, is “attempting to lock in” members and fee-payers from 86,000 Minnesota teachers and has raised their dues by $14 per year in anticipation of the Janus decision. As Center of the American Experiment vice president Kim Crockett explains, Minnesota teachers are presented with a “membership renewal” card authorizing the union to deduct dues with automatic renewal each year, “irrespective of [the signatory’s] membership in the union.”

Illinois is one of roughly two dozen states that require workers to pay union agency fees regardless of their membership status – a situation that Illinois Governor Bruce Rauner, a Republican, has fought with little success. The AFSCME argument that agency fees are non-political is absurd, Rauner argues. “By its very nature, the activity of a government union is political. Everything they do is political because it’s inside government, it impacts politics,” he explained in a September interview. But Rauner adds that Janus’ case is a surefire victory for government workers—a “90 percent chance” of winning—and would free millions of public sector employees across the United States who are currently unprotected by state “right to work” laws and forced to pay so-called “fair share” fees. That would be a major victory for worker freedom, and would threaten Big Labor’s political stranglehold in many states.

Mark Janus, however, just wants his constitutional First Amendment rights back. “The union voice is not my voice,” he says. “The union’s fight is not my fight.”

But a piece of my paycheck every week still goes to the union.

I may be in the minority of Illinois government workers on this issue, but it doesn’t mean my rights matter any less.

The Supreme Court will hear arguments for Janus v. AFSCME in June 2018.

Capital Research Center has written extensively on the fight for workers rights in Washington state, where the Freedom Foundation’s efforts to educate health care workers has cost it millions in lawsuits by the SEIU—see CRC Senior Fellow Michael E. Hartmann’s op-ed in the Washington Examiner here.

Watch our short video on the sins of teachers unions here: