What’s the North Fund and How Did It Muck Up the 2020 Election?

This little-known giant is behind the campaign for DC statehood (“51 for 51”), the push for mail-in ballots in key battleground states like North Carolina and Pennsylvania (“Count Every Vote Project”), and a pressure campaign to censor conservatives on Facebook and other platforms (“Accountable Tech”), according to trade names filed with the DC Department of Consumer and Regulatory Affairs. 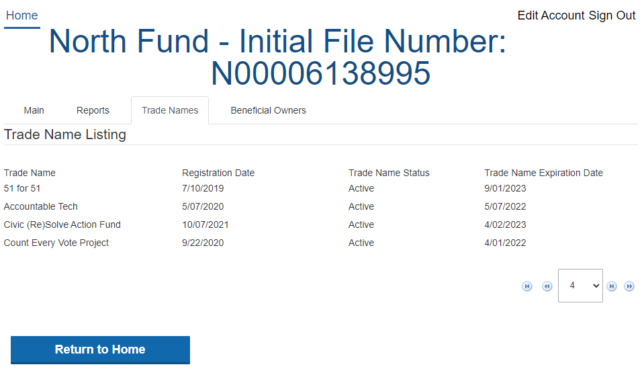 But good luck finding concrete information about the North Fund since it doesn’t have a website or public-facing presence.

A newly obtained copy of the fund’s 2020 IRS Form 990 filing reveals its shocking growth between 2019 and 2020, from $9.3 million to over $66 million, a single-year increase of 613 percent. That’s impressive growth for an organization created just three years ago. If it were a private company, North Fund’s success would’ve surely skyrocketed it to the front of Forbes magazine.

Where did that money come from? At least 46 percent—nearly half—flowed in from two “sister” nonprofits: the Sixteen Thirty Fund and New Venture Fund. Both are part of a $1.7 billion nonprofit empire run by the enigmatic consultancy Arabella Advisors in Washington, DC. The rest of the eye-popping, seven-figure donations came from a handful of anonymous donors.

We’ve documented Arabella’s secretive but far-reaching influence on congressional policy and election outcomes for years and mapped its vast network of hundreds of “pop-up” groups, websites that spring into existence to attack Republicans and disappear when their work is finished. As one senior Trump administration official told me in 2020, “Arabella is the most powerful lobbying force in DC.”

The North Fund acts as a cousin to Arabella’s four in-house “sister” groups. Arabella Advisors is listed as the contact for North Fund, which paid the company $942,000 last year for “administration, operations, and management services.” Arabella general counsel Saurabh Gupta also sits on North Fund’s board. In 2019, Sixteen Thirty Fund provided every penny of the North Fund’s revenues.

Unsurprisingly, the North Fund is run by a professional Democratic operative: Jim Gerstein. He is a partner at the consultancy GBAO Strategies with a background leading James Carville’s polling group Democracy Corps and Democratic Party campaigns.

The North Fund is effectively a pass-through for Arabella’s nonprofits and other, as-yet-unidentified left-wing funders.

In 2020 it paid out $34 million in grants to dozens of groups, nearly all of them politically active 501(c)(4)s, which are allowed to engage in political spending and electioneering that their (c)(3) counterparts are barred from.

Future Forward USA, a nonprofit whose super political action committee (PAC) spent $29 million boosting Biden, received close to $7 million from North Fund. Tens of millions of dollars—almost all of the super PAC’s funding—came from the nonprofit arm, so in all likelihood it served as a double-blind pass-through for North Fund cash.

Planned Parenthood and various affiliates got nearly $1.5 million for “civil rights, social action, [and] advocacy”—North Fund’s and Arabella’s standard line—while the State Policy Institute, a group so obscure it doesn’t even have a website, netted another $1 million from the fund. The institute is run by Roshan Patel, a consultant for the DC-based Democratic firm 50-State and a former director of the Democratic Governors Association.

North Fund gave $250,000 to Yes on National Popular Vote, a group pushing states to ignore the Electoral College and give their electoral votes to whichever presidential candidate wins the most votes nationwide. In the 2016 elections, this scheme would have had every state sending its votes to Hillary Clinton in 2016 even though Trump won the most votes locally.

North Fund even gave $100,000 to LUCHA, the far-left Arizona group whose staffers harassed Democratic Sen. Kyrsten Sinema (D-AZ) in an Arizona State University bathroom in October for not towing the “progressive” Left’s line in Congress.

The North Fund was behind multiple Colorado ballot initiatives in 2020. It funneled $1.35 million to Abortion Access for All, the campaign to defeat a proposed 22-week abortion ban (Prop. 115). The initiative was rejected 59-41 percent. North Fund and Sixteen Thirty Fund together provided $7 million of the $9 million campaign to pass paid family medical leave (Prop. 118), which passed 58-42 percent. In contrast, their opponents spent less than $800,000.

In Missouri, the group poured at least $1.1 million into a campaign to defeat Republican-proposed changes to the state’s redistricting process and campaign finance laws (it lost) and an unknown amount into Missouri’s pro-Medicaid expansion campaign, which passed.

In Ohio, the group sent $1.7 million to Ohioans for Raising the Wage for its campaign to hike the state minimum wage to $13 per hour. (It failed to make the ballot.)

Multiple lobbyists for North Fund on “voting and election policy” have also been traced to Virginia, though the details remain unclear. They may be linked to the Voting Rights Lab, a North Fund project that supports changes to voting laws across the country to weaken election fraud measures.

North Fund and its various fronts have gotten flack for declining to disclose their donors, a free speech provision permitted by the IRS. But in December 2020 Montana’s Commissioner of Political Practices ruled that the fund’s excessive political spending in the state—it dumped nearly $5 million into a successful marijuana legalization campaign between January and October—makes it an independent political committee under state law, forcing it to publicly disclose its donors and spending.

“In 2020, North Fund made 83 different grants or contributions to 70 different organizations,” the resulting document notes, each ranging “from $500 to over $1 million.” But “many of the recipients do not participate in any political activity at all,” the fund claims, and are instead educational. Really?

Like most politically active nonprofits, North Fund’s definition of “educational” differs from that of John Q. Public. Among the group’s examples of its supposedly apolitical activities are:

Recall that this was part of the fund’s defense that its activities were essentially charitable. The fund vigorously defends its donors’ right to privacy under the First Amendment—an interesting position given that the North Fund spent at least $200,000 lobbying Congress to pass the Democrats’ For the People Act (H.R. 1), which would’ve ended “dark money” by forcing nonprofits to disclose their donors.

Then again, double standards are the Left’s specialty.