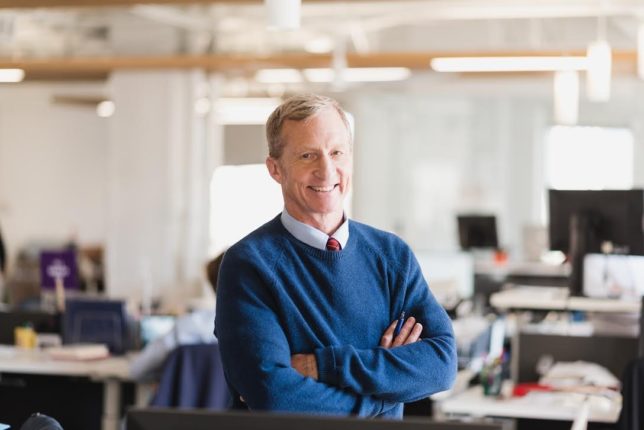 In early 2013, San Francisco billionaire Tom Steyer redirected his career and fortune to—literally in his mind—saving the world. For those whose agenda conflicted with his left-wing environmentalist crusade, he had a warning: “The goal here is not to win. The goal here is to destroy these people.” “These people” referred to those whom Steyer believed to be on the wrong side of the climate change debate.

By the 2016 elections, this appetite for destruction had become ravenous. Along with his wife, Kathryn, the still little-known left-wing billionaire from the Left Coast gave more than $91 million to ideologically partisan federal candidates and political committees, most notably his own super PAC: NextGen Climate Action. This made him the largest individual donor of disclosed funding (left-wing or right) of the 2016 election cycle. He put almost four times more into this category than both the vastly more famous (or to some, infamous) George Soros, or the equally high-profile Michael Bloomberg. Similarly, the $75.5 million forked over by the Steyers topped the list for the 2014 midterms.

When he announced his urge to destroy in April 2013, Steyer was still invested in Farallon Capital Management, the hedge fund he founded and ran until resigning as senior partner in December 2012. Many successful investors build their fortunes with a healthy dose of fossil fuels in their portfolios, and Farallon was no different. In the last months of Steyer’s leadership, Farallon’s second-largest holding was a $220 million stake in Nexen, a Canadian oil and gas firm. In early 2013, after he surrendered his leadership over the fund, but before he was personally divested from Farallon’s energy position, the firm owned more than $300 million in offshore and onshore drilling companies.

And because all modern fortunes are impossible without the fossil fuels that are critical to any significant economic activity, Steyer (like all of us) to some degree indirectly owes nearly every nickel in his personal piggy bank to the energy industry now animating his outrage.

“When someone shows you who they are, believe them,” advises Oprah Winfrey in one of her favorite life lessons. As of December 2018, Forbes estimated Steyer’s $1.6 billion net worth placed him well within a list of the planet’s 1500 richest people. So, heeding Oprah, what are we to believe about the guy who publicly preached energy industry abstinence while still profiting from the same sector—one that helped put him at the pinnacle of prosperity?

An answer becomes easier knowing Steyer’s opinion of libertarian billionaire David Koch—another direct beneficiary of fossil fuel wealth, but a donor to many of the free-market principles and causes Steyer seeks to destroy. In contrast to his own left-wing crusade, Steyer says Koch’s aid to the other side of the political bet is “taking the most incredible risk that I’ve ever seen someone take, of going down in history as just an evil—just a famously evil—person!”

Steyer’s bold words and self-told details make the metaphors of religious zealotry flow easily. He says his decision to leave the investment world came after a summer 2012 mountain hike with left-wing environmental activist Bill McKibben. The conversion at the end of the chat was “my personal version of a ‘Paul on the road to Damascus’ moment,” he told the Washington Post in 2014.

His conversion analogy works just as well in reverse: ‘Post-Damascus Steyer’—more in keeping with pre-Damascus Saul, a zealous persecutor of Christians before he became Paul—demonstrates something short of Christ-like toleration for those who follow in his footsteps on the road to riches in the energy market.

As Steyer explains in a July 2018 interview with The Guardian:

Journalists from numerous publications (Time, Politico, Vogue) have reported his habit of drawing a Jerusalem Cross on the back of his hand. If you know him well, says Vogue, then you’ve seen him draw it before church every Sunday. According to a Politico characterization of how Steyer himself describes his cross scribbling, it’s the “international sign of humility, and a reminder to tell the truth, even if they put you on a cross for it.”

he Jerusalem Cross is a bit more than a symbol of self-professed humility and martyrs crucified for their courage. It was originally a commemoration of the Kingdom of Jerusalem, won by way of the Christian First Crusade’s medieval military assault that captured Jerusalem from Muslim occupiers in 1099. From the guy who says he plans to destroy, not just defeat, his political rivals, this symbolic doodle leaves little to the imagination.

More than nine centuries later, Steyer is also leading a crusade of true believers to put an end to what he believes is another malignant occupation—this one at 1600 Pennsylvania Avenue.

In the next installment of Steyer the Crusader, learn how Steyer has used his influence and wealth to push for the impeachment of President Trump.