Steyer the Crusader: Impeachment at All Costs 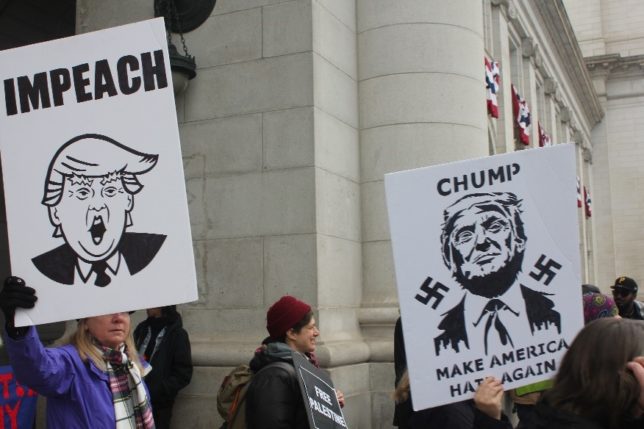 Referring to President Trump as if he’s running the North Korean regime—as a “clear and present danger who’s mentally unstable and armed with nuclear weapons”—Steyer made a plea for impeachment and removal of President Trump in a 60-second video that began airing in October 2017. Need to Impeach, a political committee backed mostly by Steyer, reportedly spent at least $50 million during the 2018 midterm election on an issue that both elevated his public profile and lit a controversial fire within the Democratic Party.

It also built a mighty voter contact list. By the end of 2018, Steyer’s “impeach and remove” evangelism had already inspired almost 6.5 million disciples to endorse the “Need to Impeach” petition, and in the process provided his organization with highly valuable contact and demographic info. Starting with the names, emails, and zip codes provided by the signatories, Need to Impeach has data-mined, improved upon, and solicited from the list.

As of October 2018 (when the list was just a mere six million names) the organization was already claiming 95 percent of the signatories supported Democrats, with 85 percent registered to vote and 34 percent regular voters. Fundraising efforts had pulled in $900,000 from just over 36,000 people, and more than 70,000 signatories had mailed out nearly 1.6 million hand written note cards to personal contacts they wished to influence.

The potential potency of its list led the Atlantic to christen Need to Impeach as an organization “with more reach than the [National Rifle Association].” During the failed crusade to defeat the confirmation of U.S. Supreme Court Justice Brett Kavanaugh, Steyer’s team claims supporters were able to hit U.S. Senate offices with more than 52,000 personal emails and nearly 30,000 phone calls.

It was a list put to use during the 2018 midterm elections and will continue to be used afterward. With Democrats taking control of the U.S. House, Steyer and his impeachment crusaders are marching ahead.

“A majority vote in the house can impeach him and expose his lawless behavior for all to see,” said Steyer in another, post-election video spot, featuring images of Democrats just elected to Congress. “They just need the will.”

But Speaker Nancy Pelosi is one of many prominent Democrats not yet singing from the Steyer hymnal. In the months before November 2018, she and other powerful Democrats worried the impeachment obsession would drive away moderate voters, and potentially cost their side a terrific opportunity to reclaim one or both houses of Congress. Later, upon learning Democrats would indeed take control of the U.S. House in 2019, she said again she could not support impeachment, despite the criticism she was taking for it from Steyer and his movement.

Establishment Democrats have been worried about Steyer’s hands-on involvement in the policy limelight since shortly after his arrival on the political scene. A May 2014 profile in the Atlantic opens with these sentences: “Democrats love Tom Steyer’s money. They’re split over Steyer’s mouth.”

The piece explains a fear then circulating through Democratic circles that the high-profile of the high-dollar donor would make it even easier for Republicans to portray the party as beholden to “Northern California” environmentalists who are “out of touch with working class America.”

“Who nominated him to speak for anything?” says a former Clinton adviser quoted in the piece. “He’s entitled to make contributions, but the idea that he would step into the spotlight is just ridiculous.”

The “out of touch” concern was so spot-on that it blew up within the Democratic Party coalition in the spring of 2016, when the president of the Laborers’ International Union of North America (LIUNA) accused the AFL-CIO of selling out to “a job-killing hedge fund manager with a bag of cash.”

At issue was the For Our Future committee, a super PAC jointly funded by several left-wing labor unions, including the AFL-CIO, and Steyer’s NextGen Climate Action, the largest single donor at $5 million. Eight of the building trade unions that are members of the AFL-CIO had become enraged by Steyer’s opposition to the Keystone XL pipeline, a potential source of high-paying jobs for unionized workers. The LIUNA president and heads of the other seven construction unions sent letters to the AFL-CIO, asking it to sever its connection with Steyer.

Allowing Steyer to purchase the “backing, prestige, and control of the AFL-CIO,” said the LIUNA chief, was “completely out of touch with the needs and concerns of ordinary, blue-collar working Americans.”

The Democratic Party’s internal concerns regarding Steyer aside, what has been his impact on the common enemy? Has he been meeting his goal of destroying his opponents?

His total spending on federal politics for just three election cycles (2014, 2016 and 2018) is so far at least $280 million. Most of the federal money was sent to the committees he is personally managing, such as NextGen and Need to Impeach. There are also millions more he has spent on state-level politics, such as ballot initiatives.

The 2014 and 2016 election cycles were so uniformly bad for Democrats that it’s difficult to separate Steyer’s contributions or failings from either the general trend, or the well-documented blunders made of others.

For example, he put significant resources into eight battleground states in 2016, and Clinton lost four of them. Sure, it’s easy to point out head-scratchers like the candidate with a half-billion-dollar spending committee called “Hillary for America” forgetting Michigan is part of America. But then again, why was Steyer’s group spending $375,000 against Libertarian Party nominee Gary Johnson?

The 2014 midterm election, the first where Steyer and his cash were seriously engaged, was most notably a battle to control the U.S. Senate—a fight Democrats lost decisively. Steyer’s NextGen Climate Action committee directly spent more than $19.5 million on four races, and nearly two-thirds of the spending ($12.5 million) was on losing efforts. In Colorado the Republican won despite the $7.4 million poured in by Steyer’s committee, and in Iowa the $5.1 million spent by NextGen couldn’t prevent a comfortable GOP victory. New Hampshire was the only race of the four where NextGen’s spending ($3.1 million) could be construed as decisive, as a Democratic incumbent won by 3.3 percentage points.

The 2018 midterms were much better for Democrats, but still a mixed bag for Steyer, who put at least $123 million into both federal and state campaigns.

He reportedly referred to the Florida gubernatorial race as the “single most important” contest in the nation, and put a $10 million bet down in favor of the Democrat—who lost.

It’s possible Arizona’s Proposition 127 was really more important to Steyer, as NextGen put up $22.4 million favoring a “yes” vote—95 percent of the total funding given by supporters. Prop 127 was a proposed constitutional amendment that would have required—within just the next dozen years—that half the state’s electricity be generated from something other than coal, natural gas, or nuclear fuel. Fun fact: those three sources currently account for 80 percent of U.S. electricty generation. Perhaps realizing the unlikelihood of powering their massive air conditioners on magical “Steyer Fuel,” a thunderous 68.6 percent of Arizona voters said “no.”

In the conclusion of Steyer the Crusader, learn how Democratic leaders react to Steyer’s sigular brand of progressivism.