The Voter Participation Center: A Tax-exempt Turnout Machine for Democrats 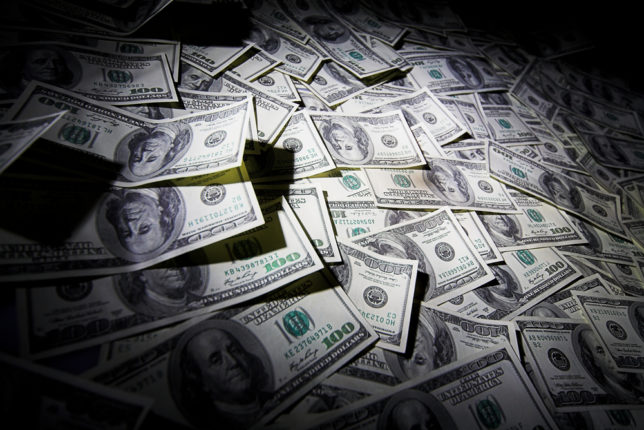 Every election cycle it’s the same story. Massive liberal foundations pour tens of millions of dollars into tax-exempt groups to turn out the Democratic vote. They call it “philanthropy, but no one really believes that. It’s certainly not for funding soup kitchens and libraries. As a secret memo reveals, not even leftists buy the “philanthropy” disguise.

Mind the Gap is a little-known super PAC based in Palo Alto, California. According to a secret internal memo from 2019 first published by the left-wing website Vox, Mind the Gap was created in 2018 to flip the Republican-controlled U.S. House of Representatives blue.

“In 2018, we managed to stay out of the news and as far as we know out of Republicans’ sightlines through the entire cycle,” the group boasts. The memo goes on to lay out a grander strategy for the 2020 elections, which it again hopes to keep secret:

the magnitude of our efforts, the details of targeting, and the names of the organizations we are recommending, would be of great interest to [Republicans]. If that information becomes public, it would make MTG [Mind the Gap] and the donee organizations targets for Republicans.

But Mind the Gap’s real value to the Left is its influence over deep-pocketed Silicon Valley donors.

Super PACs are barred from giving directly to the campaigns of political candidates. Instead, Mind the Gap convinced some 800 donors to each give the maximum contribution ($2,700) to 20 House races, raising some $11 million for Democratic candidates. Half of them won their race. As the group explains,

We in effect operate as pro bono donor advisers to a growing network of donors who are willing to give significant amounts to Democratic politics, but only if they have confidence in the efficacy of their investments.

That strategy apparently extends to the $9 million that Mind the Gap steered toward groups conducting targeted voter registration and get-out-the-vote (GOTV) in the 2018 election’s “100 most competitive House races.” The group planned to direct a whopping $70–$100 million to voter registration efforts in 2020. As of the 2019 memo, it had already raised $35 million for the job. How much it ultimately raised remains a mystery.

Yet the groups listed in the briefing are overtly partisan, operating “in areas with nested critical races [where] each additional Democratic vote will help elect Democrats in two or more critical races for the price of one.” Mind the Gap and its donors believe the only limit is how much cash they can raise for the job.

We know the groups Mind the Gap recommends receive donations, including the (c)(3) Voter Participation Center (VPC) and (c)(4) Center for Voter Information (CVI), which are “sister” groups created by ex-Clinton administration staffer Page Gardner. According to Mind the Gap, “the money donated to both organizations . . . will target minority populations in geographic areas crucial to victory in the [2020] Presidential election and key down-ballot races.”

Here is what Mind the Gap’s memo says of these two groups: 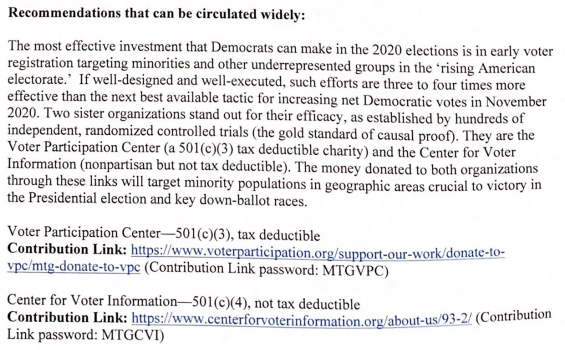 This isn’t the first-time liberals have revealed the Gardner groups’ partisanship. Journalist Sasha Issenberg wrote of the Voter Participation Center in his 2012 book The Victory Lab: The Secret Science of Winning Campaigns: “Even though the group was officially nonpartisan, for tax purposes, there was no secret that the goal of all its efforts was to generate new votes for Democrats” (emphasis added).

Both groups were also featured in Time’s infamous February 2021 article, “The Secret History of the Shadow Campaign That Saved the 2020 Election,” by Molly Ball. In it, she glowingly detailed a “conspiracy” of a “well-funded cabal of powerful people . . . working together behind the scenes to influence perceptions, change rules and laws, steer media coverage and control the flow of information.” Ball quoted VPC president Tom Lopach on the amazing claim that America has been undemocratic for nearly two decades: “All the work we have done for 17 years was built for this moment of bringing democracy to people’s doorsteps.”

Ball’s article reports that in 2020, VPC and CVI mailed 15 million voter registration applications “in key states” (apparently some states are more critical for “saving democracy” than others). Nearly 5 million of the 15 million applications were returned. VPC unabashedly targets the so-called New American Majority, which it defines as “young people, people of color and unmarried women” (read: likely Democratic voters).

VPC and CVI were also active in Virginia’s 2021 gubernatorial race, according to emails obtained by the Capital Research Center last year. That memo revealed VPC’s plans to send more than 2 million mail-in ballot applications to Virginia’s 134 counties and cities. At the top of the list was Fairfax County, a populous Democratic stronghold. VPC sent applications to 419,107 voters in Fairfax, almost the exact margin (419,943) of Joe Biden’s 2020 victory in Virginia and his largest net across the commonwealth.

(Of course, if the goal was to help return Democrat Terry McAuliffe to the governor’s mansion, it failed when Republican Glenn Youngkin won the race.)

Also mentioned in the memo, although not in the part the authors said could be shared widely, is Everybody Votes, a.k.a. Voter Registration Project.

The memo describes Everybody Votes as “a national organization that funds and trains a consortium of 50+ local community groups across the country that do the actual registration work.” But Everybody Votes doesn’t actually exist, at least under that name.

In 2021, Capital Research was the first to expose (see p. 13) that Everybody Votes is a pseudonym for the Voter Registration Project (VRP), a seemingly ordinary 501(c)(3) nonprofit that secretly spent 2016 to 2020 carrying out a $100 million, five-year plan known as the Everybody Votes Campaign with the help of a host of seven-figure left-wing donors. Researchers uncovered evidence that the campaign was launched in 2016 at the specific request of John Podesta, chairman of the Clinton campaign, who became enamored with the idea after it was pitched to him by representatives of the Wyss Foundation, the private foundation of Swiss billionaire, Hansjörg Wyss.

The idea was to target eight states, Arizona, Colorado, Florida, Georgia, Ohio, North Carolina, Virginia, and Nevada. Over five years $106 million of funding could pay for an estimated 6.3 million new voter registrations, leading to about 2.2 million net additional votes in 2020. From 2016 to 2020, VRP and its sister nonprofits, the Voter Registration Project Education Fund and Register America, raised over $150 million in combined contributions and distributed nearly every penny to activist groups exclusively in these states to pay for voter registration.

It was purely coincidental, of course, that these were important swing states whose historical margins of victory would all have been closed by 2.2 million votes spread out among them.

“Everybody Votes” also doesn’t mean everybody.

The Everybody Votes Campaign executive summary opens by describing how it was specifically targeting “constituencies including African Americans, Latinos, unmarried women, and young people”—all key Democratic constituencies. They insist that these communities were chosen simply because they are “underrepresented.”

Surely those particular groups weren’t picked for any ulterior reason.

They’re Telling Us Who They Are. We Should Believe Them.

The Mind the Gap memo shows a Democratic super PAC advising its donors that the best way to influence elections in a partisan manner is to give generously to groups that are forbidden from being partisan and from influencing elections. That seems to be a clear sign that something is seriously wrong.

Donors to these schemes are also not getting ripped off by partisan wolves in nonpartisan sheep’s clothing. The donors very much intend to feed the wolves. For example, the San Francisco Foundation was bold enough to describe its grant to the VRP as “In support of Everybody Votes for MTG-related voter registration work,” which means the anonymous donor behind the grant read the Mind the Gap memo and wanted to fund its explicitly partisan purposes.

These abuses of 501(c)(3) status are an open secret on the Left. Perhaps someday our mainstream media will report on them.