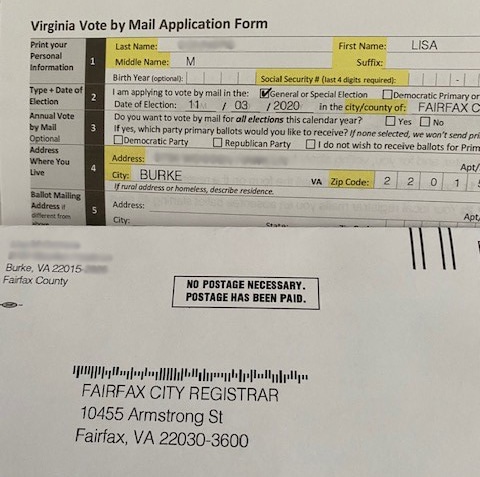 Absentee voting application for the 2020 election from the Center for Voter information, with the incorrect address for the registrar.
by Hayden Ludwig

If you live in Virginia, buckle up—a new wave of absentee-ballot mailers is about to overwhelm mailboxes across the commonwealth, courtesy of the same professional activists who flooded the Old Dominion in 2020.

A newly obtained memo (redacted version here) reveals correspondence from a pair of left-wing nonprofits in Washington, DC—the Voter Participation Center (VPC) and Center for Voter Information (CVI)—with members of the Voter Registrars Association of Virginia, which services county elections officials. The exchange was facilitated by the Philadelphia-based law firm Blank Rome, which represents the nonprofits.

The Blank Rome memo reveals VPI/CVI’s plans to send more than 2 million mail-in ballot applications to 134 Virginia counties and cities (detailed here) ahead of the state’s election on November 2, 2021, when Virginians will elect their next governor, lieutenant governor, and attorney general and decide control over the House of Delegates, currently held by the Democrats. (Virginia’s 40 Senate seats, where Democrats have a two-seat majority, aren’t on the ballot until 2023.)

At the top of the memo is Fairfax County, the biggest target by far and likely a rich haul for Democratic gubernatorial candidate Terry McAuliffe. Curiously, VPC/CVI plan to send mailers to 419,107 voters, almost the exact number of votes as Joe Biden won in 2020 (419,943), his largest net across the commonwealth.

Why does any of this matter? VPC/CVI explicitly states that the main target of this massive voter registration drive is the “New American Majority.” That’s code for likely left-leaning voters and the key to Democratic victories, as demonstrated by thousands of results turned up in a simple Google search. We’ve reported extensively on VPC and CVI, groups founded in 2003 by former Bill Clinton presidential campaign staffer Page Gardner and run by the veteran Democratic strategist Tom Lopach.

These groups use IRS rules permitting 501(c) nonprofits to engage in nonpartisan voter registration as a cloak for their blatantly partisan operations. VPC’s website proudly states that it wants to turn out more “young people, people of color and unmarried women”—a voting bloc that gave more than 60 percent of its votes for Biden in 2020 and contains 73 percent of all unregistered voters nationwide. CVI—which is funded by the Sierra Club, Tides Foundation, and League of Conservation Voters—even spent $583,000 directly aiding Biden in the 2020 election.

Take it from liberal journalist Sasha Issenberg, who explains how the Voter Participation Center works in his 2012 book, The Victory Lab: The Secret Science of Winning Campaigns: “Even though the group was officially nonpartisan, for tax purposes, there was no secret that the goal of all its efforts was to generate new votes for Democrats” (p. 305; emphasis added).

That’s the same strategy governing the Democracy Alliance (DA), a collective of left-wing donors and influencers who meet to coordinate partisan spending ahead of elections. DA defines the New American Majority as including “Black, Latino and Millennial” voters as well as “women, LGBT, Asian/Pacific Islanders, and the white working class,” labeling this bloc “central to progressive long-term success.”

No wonder the phrase is used at least 41 times in a private Democracy Alliance document detailing its “2020 Investment Portfolio Progress & Updates” and always in the context of using voter mobilization programs to reach new left-leaning voters in battleground states. Amusingly, members are instructed to make donations to the Black Civic Engagement Fund and similarly named causes payable to the New Venture Fund and Sixteen Thirty Fund, two nonprofits in the $731 million “dark money” empire controlled by Arabella Advisors. 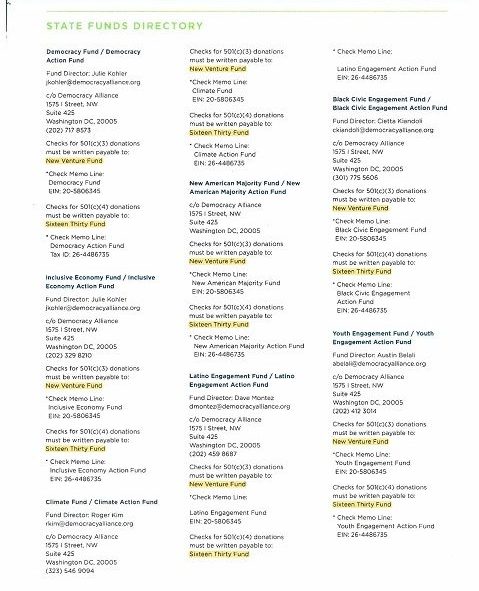 But even liberals have criticized the VPC/CVI strategy. As far back as 2008, liberal NPR has accused CVI of suppressing black voters to help Hillary Clinton against Barack Obama in the Democratic primary. NPR wrote that CVI’s strategy aimed at black voters sounded “like a classic example of voter suppression—sowing confusion in order to drive down turn-out.”

In 2020, the Washington Post, which couldn’t help but call VPC and CVI “nonpartisan,” nevertheless pointed out last August that “both organizations appear to be more aligned with efforts to defeat [President Trump] than with his [Trump’s] allies.”

Less than two weeks before the 2020 election, the watchdog ProPublica detailed a major CVI screw-up that sent more than 35 crates of absentee ballot requests intended for residents of Fairfax County, Virginia, to neighboring Fairfax City. Here’s the headline: “A Nonprofit with Ties to Democrats Is Sending Out Millions of Ballot Applications. Election Officials Wish It Would Stop.” Whoops.

Using nonprofits to conduct huge voter registration drives is only one component in the Left’s plan to effectively federalize future elections using vote by mail. This is the new norm in American politics, and sadly for democracy, it’s here to stay.