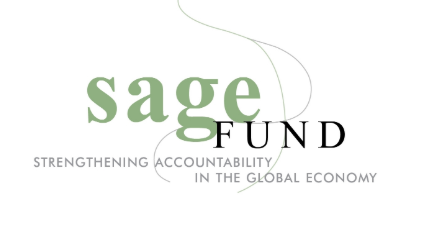 Sometimes funders aren’t what they seem.

At first glance, SAGE seems useful for channeling funds to groups dealing with corruption, poverty, and the negative effects of globalization. But where does the money come from? Dig deeper and you’ll find that the IRS doesn’t list the SAGE Fund in its records. Neither do nonprofit watchdogs like ProPublica or Guidestar.

That’s because SAGE is synthetic—a “pop-up” plaster smeared across a “dark money” shell. In reality, SAGE is another face of the New Venture Fund, the flagship of Arabella Advisors’ half-billion-dollar nonprofit armada.

Like its three “sister” nonprofit entities, New Venture is a genuine tax-exempt nonprofit that plays host to a legion of phony groups just like the SAGE Fund. As we’ve reported before, these groups give the illusion that they’re independently staffed and funded, when in reality they’re puppets run by Arabella, a for-profit consulting company headquartered in Washington, D.C.

A rogues’ gallery of mega-donors like the Joyce Foundation, Swiss-based Oak Foundation, and the Democracy Fund pay Arabella to host phony “funds” like SAGE, using them to disguise the huge flow of cash into and out of New Venture and its siblings. It’s a black box for watchdogs like the Capital Research Center, since individual grants to “pop-ups” like the SAGE Fund can’t be traced back to their original grantors.

(For our full breakdown of the Arabella empire, see Big Money in Dark Shadows here.)

New Venture formed the SAGE Fund in 2015 to direct funding toward “mobiliz[ing] new coalitions and constituencies” in the “Global South” (a neo-Marxist term for developing countries). While SAGE has revealed a handful of its project supporters—namely the Ford and Open Society Foundations—most of its donors remain hidden behind the Arabella veil.

What openDemocracy failed to note, however, is its own tight relationship to a shadowy American outfit: NEO Philanthropy, a pass-through funder that plays host to the British group in the United States. NEO, like Arabella Advisors, hosts numerous left-wing “pop-up” groups attacking conservatives on every issue from healthcare to gun control. Between 2010 and 2017, it moved nearly $400 million to activists and think tanks.

SAGE’s staffers have significant connections to major funders on the Left. SAGE Fund director Daria Caliguire is a former project manager and consultant for the Ford Foundation, now a SAGE donor. The group’s advisory board also includes Greg Mayne, a program officer for the Swiss-based Oak Foundation (another SAGE grantor).

Another SAGE advisory board member is Lesley Carson, a program director for the Wellspring Philanthropic Fund, a multi-million-dollar pass-through funder whose former name—Matan B’Seter Foundation—actually means “anonymous gift” in Hebrew.

There’s no shortage of complaints about the influence of nefarious “dark money” in our politics, particularly from critics on the Left. But groups like the SAGE Fund and the sea of fake groups under Arabella’s control prove that there’s vastly more secret spending on left-wing causes than liberals know—or care to admit.