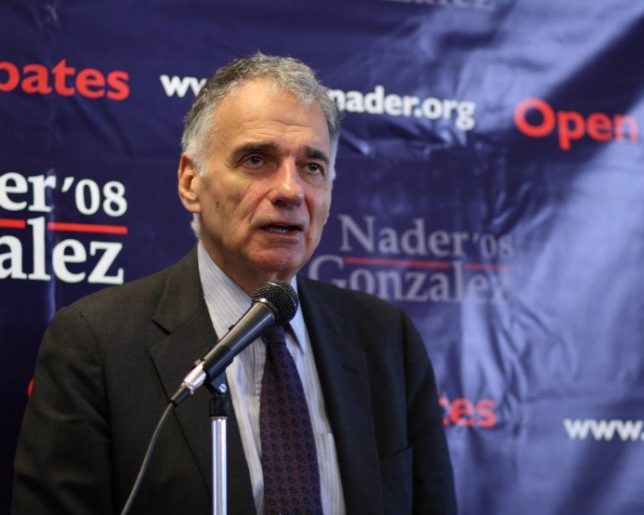 Both NEO and the PIRGs emerged from the left-wing “consumer activist” movement spearheaded by Ralph Nader, leader of the so-called “Nader’s Raiders” and founder of numerous community organizing nonprofits still at large.
by Hayden Ludwig

Summary: NEO Philanthropy is one of the Left’s best-kept “dark money” secrets. Commanding hundreds of millions of dollars, the group plays a key role in “incubating” dozens of new activist groups and coordinating left-wing efforts to alter the landscape of American politics in the 2020 census.

Not all “dark money” funders are created equal.

In our latest profile of the Left’s leading “dark money” grantmakers, we chart the reach of NEO Philanthropy—a massive clearinghouse instrumental in moving nearly $390 million to activist groups and liberal think tanks since 2010.

But unlike other left-wing “dark money” groups—such as the Tides Foundation or Arabella Advisors’ nonprofit network—NEO Philanthropy is also a strategy hub for the institutional Left’s biggest target: the 2020 census. Through its arms, NEO coordinates the flow of huge amounts of “dark” cash to the nonprofits pushing expanded voter registration, turnout, and anti-voter ID efforts.

It’s a story born out of the “consumer activism” of the 1970s, the same period which gave rise to hundreds of so-called “public interest” groups that continue to dominate left-wing politics today. And though NEO Philanthropy has changed its leadership, mission, and even its name, one characteristic has remained constant: its unique position as the Left’s “dark money” coordinator of choice.

A Clearinghouse Is Born

NEO Philanthropy’s roots go back to the activism of the 1970s, a period that birthed much of the modern institutional Left. The secret is in the group’s original name—Public Interest Projects—which bears a striking resemblance to another major product of that era: the Public Interest Network, famous for campus-based Public Interest Research Groups (PIRGs). Both NEO and the PIRGs emerged from the left-wing “consumer activist” movement spearheaded by Ralph Nader, leader of the so-called “Nader’s Raiders” and founder of numerous community organizing nonprofits still at large.

As CRC has documented in “Secrets of the Public Interest Pyramid,” the PIRGs form a complex web of over a hundred research, fundraising, and lobbying groups controlled by a handful of veteran “Nader’s Raiders.” Central to this scheme are the PIRGs themselves: nonprofits that lobby for expanded state regulations largely using fees pocketed from university students who unwittingly vote to support their school’s PIRG chapter.

Today, NEO Philanthropy and the PIRGs apparently have little connection, but when Donald Ross founded NEO Philanthropy in 1983 the PIRGs were something akin to NEO’s older brother. Ross co-crafted the PIRG model alongside Nader in their 1971 book, Action for a Change, a sort of “how-to” manual for what would become the PIRG network.

From 1973 to 1982, Ross was the founder and executive director of New York State Public Interest Research Group (NY-PIRG), which he reportedly grew to 180 staffers operating out of 31 offices. Under Ross, NY-PIRG pushed for a range of policy changes, including a moratorium on the construction of nuclear power plants and abolition of nuclear energy—a popular position of the 1970s environmental Left. (Decades later, Bloomberg reported that a young Ross had led “two of the largest anti-nuclear rallies in U.S. history.”)

This activism was funded largely through student fees voted on by students across the New York state university (SUNY) system. A 1975 copy of the newspaper Albany Student Press, for instance, quotes Ross calling NY-PIRG the “pioneer of mass involvement of students.”

Nader himself brags about Ross’s work on his personal website, writing that under Ross NY-PIRG was “probably the most significant activist group in the state of New York.” He even credits Ross with the creation of door-to-door canvassing, a practice continued by the PIRGs today and which arguably forms the bedrock of the national PIRG network’s funding:

One innovation, pioneered by NY-PIRG, that has been adopted by many other PIRGs is the use of door-to-door canvassing as a means to raise money, educate the public and organize grassroots support. The canvass has allowed the PIRGS to reach out to the local community as well as to students. With both student and citizen members, the PIRGs nationwide enjoy the support of more than one million people.

NY-PIRG continues to be something of a heavyweight among its peers. According to Brooklyn College Environmental Science Professor David Seidemann, the group is so successful at raising money from state universities—largely through the support of sympathetic faculty who give the group “unique campus privileges”—that NY-PIRG now “raises more money than all other campus student groups,” to the tune of $1 million diverted in mandatory student fees each year. In 2012, then-New York attorney general Andrew Cuomo even awarded the group a $10 million state grant—more than twice its budget—to promote its national advertisement campaign.

Ross himself may have crossed paths with NY-PIRG’s most famous alumnus, Barack Obama, who worked as a full-time community organizer for the group from February to May 1985 while attending Columbia University. While it’s impossible to say for sure, it’s worth recalling that Ross—NY-PIRG’s founder and indelible mastermind—maintained close connections to the group even after he left, through which he may have crossed paths with the young Obama. Ross, a lifelong New Yorker, left his position as NY-PIRG director to lead Citizen Action New York, another group founded by Nader.

It’s from this murky sea of Naderite groups that “Public Interest Projects”—the original name of NEO Philanthropy—emerged. Ross formed the group in 1983, shortly after leaving NY-PIRG to head Citizen Action New York. Details surrounding its creation remain scarce, but in an interview in 2015 NEO president Michele Lord revealed that:

The name Public Interest Projects was essentially picked out of a hat. The original founder, Donald Ross, wanted the organization to be under the radar so that people wouldn’t necessarily know what it did. Before I came, we were always in the back, never in the front. Once we started developing our work, the name became confusing to people. It didn’t say who we were, and it didn’t say anything about our values [emphasis added].

From 1985 to 1999, Ross was chief administrative officer for the Rockefeller Family Fund, which funds activist groups. Then in 1984, he and NY-PIRG legislative director Arthur Malkin started an Albany-based lobbying firm, Malkin & Ross, which was hailed in 2003 as “one of Albany’s top 10 lobbying firms.” Sometime after, the duo expanded to Washington, D.C., with M&R Strategic Services, which services many major groups on the Left—including NEO Philanthropy. Perhaps ironically, the former “people’s movement” activist is now a wealthy political consultant catering to a “who’s who” of the Left’s political elite. In 2010, Ross and his wife, Helen Klein Ross (well-known poet and novelist), even purchased a $1.5 million historic Connecticut mansion (“Holleywood”) and spent two years and $2.2 million renovating the 160-year-old building.

Naturally, Ross is well-connected. From 2004 to 2009, he was a member of the Greenpeace board of directors, serving as chairman for multiple years. Ross was also a board member for the League of Conservation Voters from 2004 to 2010.

Interestingly, a July 2014 report by the U.S. Senate Committee on Environment and Public Works recorded that Ross was part of “a narrow set of individuals whose careers are part of the fabric of the far-left environmental movement . . . [who] exercise outsized influence regarding the distribution of funds” by groups like “Environmental Grantmakers Association, Democracy Alliance, and others.”

In the next installment of The Left’s “Dark Money” Coordinator, learn about the different services NEO offers to create movements and conceal financial relationships.