The Left’s War on Coal: The Hawaiian Model 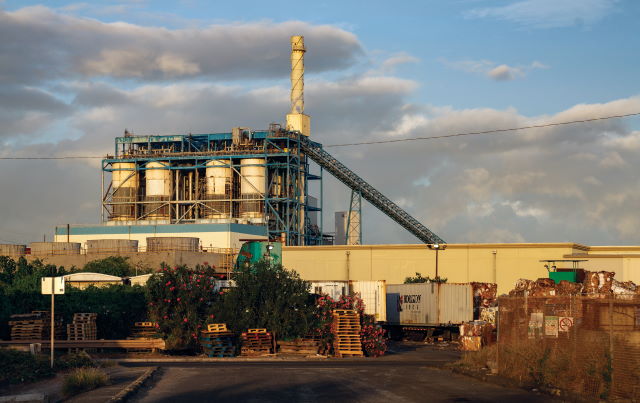 In 2017, Hawaii’s biggest utility provider announced it was shutting down AES Hawaii on Oahu, the state’s last coal-fired plant. It would replace it with renewables in 2022 to comply with a mandate from the legislature to reach 52 percent renewable energy by 2021 and 100 percent by 2045. Credit: Tony Webster. License: https://bit.ly/3u3GIwN.
by Hayden Ludwig

In 2017, Hawaii’s biggest utility provider announced it was shutting down AES Hawaii on Oahu, the state’s last coal-fired plant, in order to replace it with renewables in 2022, part of a mandate from the legislature to reach 52 percent renewable energy by 2021 and 100 percent by 2045.

Then there’s the problem of storing electricity generated by renewables. The most efficient solar panels today operate at 23 percent efficiency, while wind turbines average between 20 to 30 percent (with a theoretical limit of 59 percent). Both are subject to extended periods when they simply don’t generate electricity—nighttime for solar panels and calm days for wind turbines. So renewables require batteries capable of storing enough electricity during peak periods to shed during off-periods, but that technology just doesn’t exist yet. A 2016 study found “steeply diminishing returns” when many lithium-ion batteries were added to the electrical grid. As Storm puts it, “Hawaii is a model of the impact of applying carbon free electricity generation policies before storage technology catches up.”

To operate at all, the grid requires a steady input of electricity. Absent the kind of batteries and renewables that exist only in science fiction, any system that tries to sustain itself on wind and solar sources will collapse almost the minute those sources stop feeding it power.

Enter natural gas, which is affordable, is available at any time, and can vary output to meet shifting demand. Every wind farm and solar array mandated by the Left virtually guarantees a new market for gas producers—a recipe ripe for cronyism.

Most people think the war over renewables is between environmental activists and lobbyists for Big Oil and Gas. That couldn’t be further from the truth. For years the pair have conspired to push an environmental agenda that threatens U.S. energy independence and jacks up household electricity rates. Their goal is to weaponize regulations to obliterate “dirty,” environmentally “unfriendly” coal.

This isn’t the first time that Big Business and Big Green have teamed up to take on a mutual competitor. Many people will remember Enron, the $100 billion energy mega-conglomerate that shattered overnight in 2001 after it was discovered that the company had defrauded investors and regulators with fake profits for years. Enron was formed in 1985 from the merger of two Texas natural gas producers, and in the late 1990s it dazzled the public with an innovative global market for trading energy commodities.

What isn’t often remembered, though, is Enron’s attempt to gut the coal industry in order to promote its commodity of choice: natural gas. The company loudly proclaimed natural gas the “green” energy of the future—which, of course, was actually true, as the recent fracking revolution bears out. Enron and its activist allies understood that a national shift from coal to less CO2-intensive gas would reduce annual greenhouse gas emissions, which is exactly what happened: U.S. emissions reached a three-decade low in 2020.

But Enron’s goal was hardly philanthropic (if you consider CO2 a pollutant, that is). Under the 1997 Kyoto Protocol on global warming—the predecessor to today’s Paris Climate Agreement—coal companies would be virtually forced to purchase emissions credits in order to burn coal, creating a market for buying and selling permits controlled by Enron. The company hoped to fill the void previously occupied by coal with natural gas and become the chief broker of emissions permits to other CO2-emitting companies. Better still, Enron could count on heavy subsidies from the U.S. Export-Import Bank and Overseas Private Investment Bank to promote renewables.

Enron lobbied the George W. Bush administration to place caps on CO2 emissions in line with Kyoto, knowing that the harshest regulations would fall on coal producers, since coal is more CO2-intensive than oil or gas. As Cato Institute climatologist Patrick Michaels observed shortly after its collapse, Enron had one goal in mind: “dial coal out of the economy.” Internal correspondence later showed than Enron employees believed that Kyoto would “do more to promote Enron’s business” than any other single regulation. 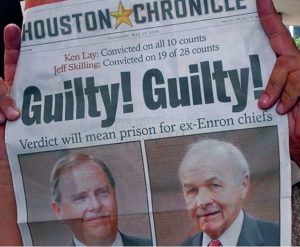 Enron, the $100 billion energy mega-conglomerate, shattered overnight in 2001 after it was discovered that the company had defrauded investors and regulators with fake profits for years. Credit: ColdFusion. License: https://bit.ly/3prnxK7.

Enron CEO Kenneth Lay was the main driver behind the firm’s loud support for the Kyoto Protocol. He simultaneously became one of the largest donors to George W. Bush’s presidential campaign while cultivating contacts in the “green” movement, including Greenpeace, which reportedly described the company “in glowing terms.” The Houston Chronicle reported in 2002:

Lay has been painted as a heartless advocate of free-market economics when he actually was working behind the scenes for control of energy emissions, establishing alliances with the most radical environmentalist pressure groups. Just as Enron pushed electrical deregulation to make billions in energy trades, Lay wanted restrictions on carbon dioxide emissions under the Kyoto agreement to artificially create a market for CO2 “credits” to be purchased to burn coal. Enron was not about ideology and certainly not partisanship, but was using governmental contacts to maximize profits.

The lynchpin behind this arrangement was former U.S. Senator Timothy Wirth (D-CO). He was undersecretary of state for global affairs in the Clinton administration and represented the United States in the 1997 Kyoto Climate Conference. In 1998, Wirth became the founding president to the United Nations Foundation, an American nonprofit founded with a $1 billion endowment from liberal media mogul Ted Turner to aid the U.N., and he later co-chaired Al Gore’s 2000 presidential campaign.

Wirth played middleman, connecting Lay to Bush administration Treasury Secretary Paul O’Neill in 2001 and relaying assurances to Lay that O’Neill was interested in global warming legislation. The Heinz Center, an environmental group funded by leftist billionaire Teresa Heinz (wife to Sen. John Kerry), next issued a private report to Lay indicating O’Neill’s support for lowering emissions by establishing an alternative international treaty in line with the Kyoto Protocol. The plot sparked a serious internal dispute over the administration’s environmental policies and was defeated only when Republican outrage led President Bush to kill the deal in March 2001. Seven months later Enron’s house of cards collapsed amid the revelations of widespread accounting fraud, quickly followed by bankruptcy.

In the next installment of “The Left’s War on Coal,” see crony capitalism in action as Big Energy adapts to exploit government efforts to combat “climate change.”