The Left’s New Radicals and the Big Money Behind Them 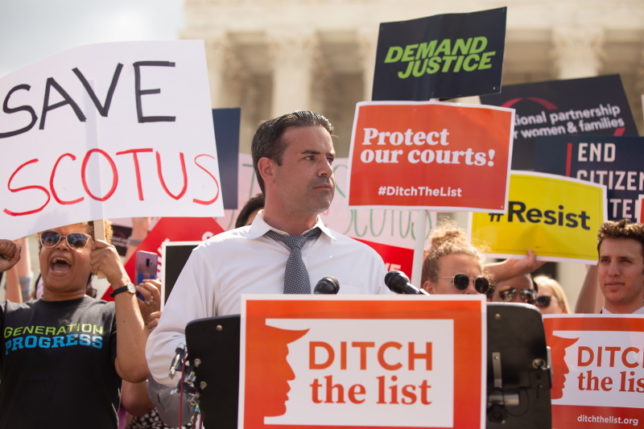 The response to the loss of Justice Ruth Bader Ginsburg demonstrates once again that the loudest voices who claim to represent Democrats’ interests are shouting from the radical wing, further left than the Rev. Al Sharpton, former President Barack Obama, and even Ginsburg herself.

The Left’s reaction, led by the Arabella Advisors pop-up group Demand Justice – known for their disturbing antics during the Kavanaugh hearing – was immediately to pledge $10 million to keep Ginsburg’s Supreme Court seat open before the election.

A former Clinton flunkie may not be what springs to mind when one thinks of the radical Left, but it’s time to correct that. These radical groups are bolstered by big, left-wing “dark money.” During the Kavanaugh hearing, Demand Justice condemned the Supreme Court nominee before his name was even announced. In fact, they openly “worked to galvanize opposition against any Republican nomination for Kennedy’s vacated seat.”

Kavanaugh’s dubious accuser Christine Blasey-Ford was represented by for-profit PR firm SKDKnickerbocker who received $7 million in 2017 from the Sixteen Thirty Fund, another Arabella group. Protestors who confronted former Senator Jeff Flake (R-AZ) in an elevator and interrupted hearings during the chaos belonged to the Center for Popular Democracy, which takes money from New Venture Fund, a sister group of Sixteen Thirty Fund. The four groups Arabella manages, including Sixteen Thirty Fund and the New Venture Fund, brought in more than $1.6 billion between 2013 and 2017. A new report details how Arabella, since 2006, “has pumped a stunning $2.4 billion into politics with nary a peep from ‘dark money’ hawks such as Sen. Sheldon Whitehouse (D-RI) while liberal groups bemoan the threat of conservative political spending to the republic.”

These radical protesters who created the chaos over SCOTUS in 2018 were well funded. When Kavanaugh was announced as the nominee, the group began the battle by “attempting to find controversial material in Kavanaugh’s judicial record, funding ads calling for Kavanaugh’s resignation from teaching summer classes at George Mason University, and organizing protests against lawmakers after Kavanaugh was confirmed.”

It got ugly, much uglier even than the less extreme attempts of Democrats who had opposed Robert Bork and Justice Clarence Thomas, which were bad enough at the time.

The new radical Democrats are hoping to fund the chaos again as the Democrat Party continues to cede its political strategy to the political philosophy embodied by New York Rep. Alexandria Ocasio-Cortez, who appeared at a press conference Sunday with old guard Sen. Chuck Schumer (D-NY) to declare their intent to battle any Supreme Court pick by Trump.

“We need to make sure we mobilize on an unprecedented scale to ensure this vacancy is reserved for the next president,” AOC said, while Schumer stood placidly by.

Few seem to remember that Barack Obama soberly  demanded the Senate “do its job” and confirm his nominee in 2016. Or that Justice Ginsburg herself was opposed to packing the court (something else the Arabella network has its eye on).

Things are so crazy that Democrats once considered radical have begun to appear moderate – like the Rev. Al Sharpton, who recently criticized the notion of defunding police. Those voices are being drowned out by the fever-pitch, high-frequency din of the new radicals taking over the party.

Should the Democrats want to wrest control back from the radicals in their ranks who would destroy and remake the entire system, they’ll have to go up against a multi-billion-dollar network of funding that is trending as radical as the new class of Democrats.

This article first appeared in Legal Insurrection on September 25, 2020.