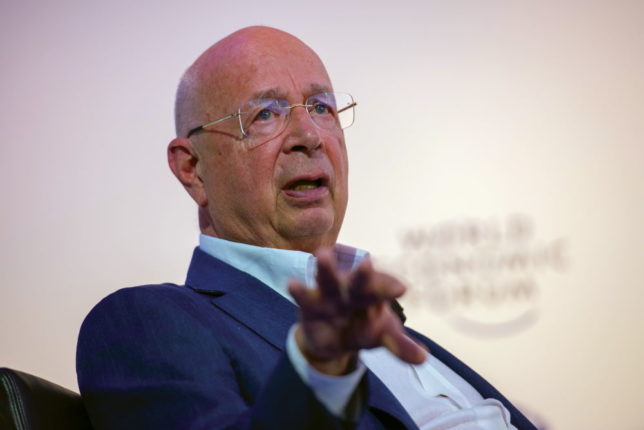 In 2021, Klaus Schwab and Thierry Malleret wrote The Great Narrative for a Better Future, a follow-up volume to The Great Reset. Credit: WEF Pascal Bitz. License: https://bit.ly/3ikdMzX.
by Michael Watson

The Great Narrative: A Bet on the Highly Unlikely

The ambition of COVID-19: The Great Reset and the WEF’s broader Great Reset projects ensured that the 2020 volume would not be the last word on the question. So, in 2021 (the book was copyrighted in 2022, but the introduction is dated December 2021) Klaus Schwab and Thierry Malleret wrote The Great Narrative for a Better Future, a follow-up volume to The Great Reset.

If the first volume was supposed to be a description of where COVID-19 was sending the world, The Great Narrative was to be what Schwab and Malleret called “a framework for future action.” To that end, the authors conducted “50 conversations with foremost global thinkers and opinion-makers” to help sharpen their argument for what WEF critic and Hoover Institution senior fellow Victor Davis Hanson called:

Given the people who made up the book’s list of global thinkfluencers, that laundry-list of warmed-over leftism is exactly what one would expect from Schwab and Malleret’s narrative. The authors’ conversationalists included several American and British academics (not a group known for their ideological diversity, unless left and radical-left” count), environmentalist scholars and activists, think tankers, and two former leaders of international institutions with ties to the Chinese Communist Party’s Chinese People’s Consultative Conference. Interestingly, missing from the list are any industrialists (even environmentalist ones) or even trade union officials. This is surprising given Schwab and Malleret’s praise for organized labor. No Abrahamic religious leaders were listed as discussants; one environmentalist Hindu guru was. The authors did speak with at least two identifiably center-right people from Britain and America; Dambisa Moyo, an economist and author who now sits as a Tory in the House of Lords, and historian and Hanson’s Hoover Institution colleague Niall Ferguson.

Hanson’s quote, taken from his essay in the critical compilation Against the Great Reset, accurately summarizes Schwab and Malleret’s Great Narrative. It is worth examining the fulcrum of reality on which the Great Reset–Great Narrative hinges. The technocratic vision has a critical flaw: It admits no decision point at which policymakers or the mass public must decide whether to bear a cost for a benefit.

Therefore, in The Great Reset the decision to lock down or open the economy had to be presented as a false choice, with the true answer being to lock down because the economy would not recover anyway until the virus was suppressed. This claim can be evaluated against the economic performances of Florida, spiritual home of the American anti-lockdown movement, and California, dedicated to “following the science.” Florida’s labor force and total employment have not only fully recovered from the pandemic, but also increased in aggregate. California’s have both fallen.

In The Great Narrative, the solution to the difficulty that an aggressive environmentalist agenda would place on the Western middle classes who might not be ready for the “you’ll own nothing, and be happy” ideal is Moore’s Law for everything. Moore’s Law is the claim, made by and named for longtime Intel (and Gordon E. and Betty I. Moore Foundation) head Gordon Moore, that the number of transistors on a microchip would double every two years. Less precisely, it is a statement of rapid technological progress.

Schwab and Malleret predict that because of rapid technological progress, decarbonizing the economy can occur beginning immediately, though there may be “bumps along the way” in the form of higher energy prices. This progress, combined with developments in human-machine interfaces and the “internet of things,” will effect the “Fourth Industrial Revolution” that Schwab has proclaimed.

Maybe it will, though as Michael Brendan Dougherty noted in his reflection on the 2022 World Economic Forum conference at Davos, whether the Davoisie would take such blessings as cause to offer the public “anything other than a future of privation and control” is unclear from their rhetoric. But what if, like their prediction of inflation rates from 2020, Schwab and Malleret are wrong?

If governments and corporate ESG activists decide to follow The Great Narrative agenda and the promised rapid technological progress does not emerge, the average citizen—at least in the industrialized world—will find himself substantially worse off in life-experience terms. Europeans, who have been living the decarbonization agenda for a few years now, are experiencing an energy crisis after Vladimir Putin invaded Ukraine, making his role as Europe’s supplier of natural gas untenable. (An American president had in 2018 warned about Europe’s reliance on Russian energy, to much ridicule from the great and good at the time.) Now, Europeans are figuring out how to live without central heating in case further energy rationing is needed.

The reaction to lockdown showed that people will live with less for a period. And then they won’t. At the time of writing, even the People’s Republic of China, a totalitarian dictatorship, has been forced in part by public pressure to abandon its Zero-COVID lockdown regime. The mere perception that the middle classes in the industrialized West were falling behind gave rise to the first generation of 21st century populisms of Right and Left: Donald Trump, Marine Le Pen, Bernie Sanders, Jeremy Corbyn, and so forth. They were not entirely successful; all lost to establishment figures either within their own faction or in general elections, some multiple times.

But where would a Davos agenda that fails to keep the heat on, declines into the surveillance dystopia that Schwab and Malleret themselves acknowledge as a possibility, or leads to mass unemployment as factories shutter and small businesses close lead? A second generation of Western populists is already emerging, and nothing would power it more forcefully than making people’s lived experiences worse in the medium term.

In the next installment, the critics respond to the authors’ utopian globalism.