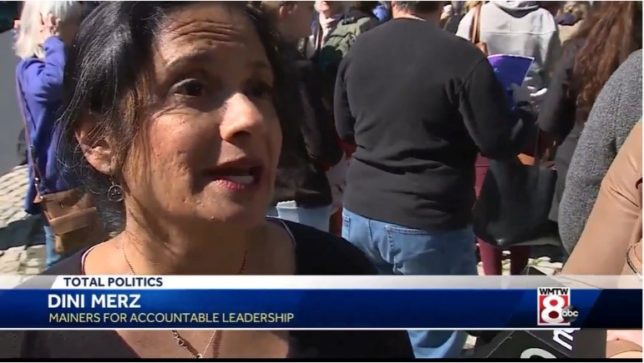 Dini Merz is the program director for the Colombe Foundation.
by Hayden Ludwig

The Colombe Foundation (or Colombe Peace Foundation) is unique among the Proteus Fund’s donor collaboratives in that it’s a standalone nonprofit, not a fiscally sponsored project. Proteus established the foundation in 1997 and Proteus staff administer it.

Colombe primarily makes grants to groups that seek to eliminate nuclear weapons, push arms control treaties, and support budget cuts in U.S. defense spending in opposition to what it calls growing “militarism” at home. The group’s name is likely related to its anti-war activism; “Colombe” is French for “dove,” a symbol of peace.

Colombe also granted $370,000 to ReThink Media and $319,000 to the Proteus Fund. But its most controversial grant recipient is arguably the Ploughshares Fund, which has received $941,000 since 2002 from the Colombe Foundation, at one point its fifth-biggest donor (now its tenth-biggest).

Colombe’s grantees tend to focus their advocacy efforts on reducing stockpiles of nuclear weaponry and shaping American foreign policy. The Center for Arms Control and Non-Proliferation, in particular, opposes a “first use” defense policy, meaning the United States will only resort to using nuclear weapons in reaction to a nuclear attack by a foreign state. Others, like the National Priorities Project, focus on domestic policy; the group was created in 1983 to attack the Reagan administration’s “destructive and misguided budget policies” concerning defense spending, favoring federal spending on renewable energy, Medicaid, and other social welfare programs.

The Colombe Foundation is also a major supporter of Women’s Action for New Directions (WAND), a feminist activist group founded in the early 1980s as Women’s Action for Nuclear Disarmament and renamed after the collapse of the Soviet Union in 1991. WAND lobbies Congress for the “eradication of nuclear weapons” and shrinking the national defense budget in order to redirect military spending “towards unmet human and environmental needs.” The group regularly stages protests and marches in Washington, D.C., criticizing the supposedly “militarized, patriarchal culture” that led the United States into “endless war and violence.” Since 2002, Colombe has given $1.5 million to WAND, $760,000 to the WAND Education Fund, and another $342,000 to the Georgia WAND Fund, a state-based voter mobilization group.

Edith “Edie” Allen is founder and president of the Colombe Foundation, though Allen isn’t listed on Colombe’s website and makes almost no appearance online in connection to the foundation. (She appears in the foundation’s annual IRS filings as far back as 2002, the earliest available date.)

The left-wing website SourceWatch describes Allen as a veteran volunteer with WAND. (Allen has been a board member for the WAND Education Fund since 2009.) While at WAND, Allen reportedly met then-student volunteer Naila Bolus, an activist who later worked as executive director of the Ploughshares Fund from 1997 to 2011. Allen herself was a member of the Ploughshares Fund board of directors from 2009 to 2015—a board which at various times has also included such luminaries as Ploughshares president Joseph Cirincione, a former Center for American Progress vice president; Hal Harvey, CEO of the ClimateWorks Foundation; former CIA officer Valeria Plame; Iranian religious scholar and media figure Reza Aslan; and former Obama administration Secretary of Defense Chuck Hagel.

Dini Merz is the Proteus Fund’s program director for the Colombe Foundation. Merz is a career nonprofit manager, and previously worked for the center-left Tremaine Foundation in New Haven, Connecticut. She is a former board member for the New England Grassroots Environment Fund and is a steering committee member for the Peace and Security Funders Group, a donors roundtable whose other members include the Ploughshares Fund, Wellspring Philanthropic Fund (a major “dark money” funder), Open Society Foundations, MacArthur Foundation, and others.

One of the Proteus Fund’s more salient projects involves its membership in the Funders Committee for Civic Participation, a major donors collaborative run by NEO Philanthropy. The Funders Committee has a three-fold aim: register and turn out new voters during elections, increase the number of people counted in the 2020 census (particularly in Democratic-controlled states), and toss out Republican-drawn congressional maps in legal battles.

But the Funders Committee doesn’t fund these efforts directly; instead, it acts as a hub for wealthy foundations to coordinate the flow of money to the activist and litigation nonprofits that actually do the work. Proteus is just one of roughly 90 members who churned out a combined $5.3 billion in total expenditures in 2016.

While Proteus itself is nowhere near the biggest spender in that list, the group has been essential to the Funders Committee’s longtime goal of getting left-wing foundations to spend more on voter engagement activism—which the foundations have been historically reluctant to do. In 2005, Proteus created the “Voter Engagement Evaluation Project” to fix that problem.

The project began in June 2005 when the Funders Committee invited “some 140 funders” to discuss what voter engagement tactics worked and didn’t work in the 2004 election. Those “funders” included such notables as Patricia Bauman of the Bauman Family Foundation, Deepak Bhargava of the Center for Community Change, and Anne Bartley of Rockefeller Philanthropy Advisors; as well as representatives from the Open Society Foundations, Z. Smith Reynolds Foundation, Tides Foundation, Gill Foundation, Sierra Club, Project Vote, and the Pew Charitable Trusts.

Their feedback was initially compiled in a 2005 report by political activist Heather Booth, the founder of USAction (successor to Ralph Nader’s defunct group People’s Action) and the community organizing training group, Midwest Academy, among others.

That last bit is key. While foundations are barred from engaging in overtly partisan activity, the IRS considers registering new voters a charitable act open to nonprofits. Thus, the IRS permits numerous tax-exempt nonprofits (mostly on the Left) to engage in massive voter registration and turnout campaigns, so long as they don’t advocate for a particular political party or a candidate.

But the line between charity and politics is razor-thin when it comes to voting. Foundations are acutely aware that this activity is arguably an inherently political act—one that can compromise philanthropic giants like Ford and MacArthur.

And Proteus knows it. The 2006 Proteus report acknowledged that “funders sometimes are concerned about support of civic/voter engagement activities because they are political and therefore can be perceived as partisan.” Nevertheless, its authors insist that:

The report concluded that an effective voter engagement strategy incorporates voter registration, education, “protection,” and get-out-the-vote activities to increase overall turnout. To that end, it recommended the use of paid canvassers instead of volunteers, who aren’t reliable enough to conduct lasting voter mobilization work.

It’s unclear what effect the Voter Engagement Evaluation Project had on the broader Left’s voter mobilization activities. The project permanently closed in 2006 following publication of its report. But it’s important to recall that the short-lived project emerged at a time when top strategists first developed the infrastructure which defines today’s professional Left. The Democratic Party’s failure to retake the presidency in 2004 led directly to the creation of the Democracy Alliance in early 2005 because co-founder Rob Stein thought that “liberals [did] not have a well-funded network of policy shops, watchdog groups, and training centers for activists equivalent to what [had] existed for years on the Right.”

The Funders Committee, too, has only refined its strategy, forming what it calls the Integrated Voter Engagement model for funding get-out-the-vote drives in order to “achieve policy impact.” What is clear is that the Proteus Fund has been a small-yet-powerful element in developing this master plan and will continue to do so going into the 2020 election.

In the conclusion of The “Dark Money” Shape-Shifter, learn how Proteus paved the way for the future of left-wing “dark money” nonprofits.