Riot Funding Could Use Some Sunlight 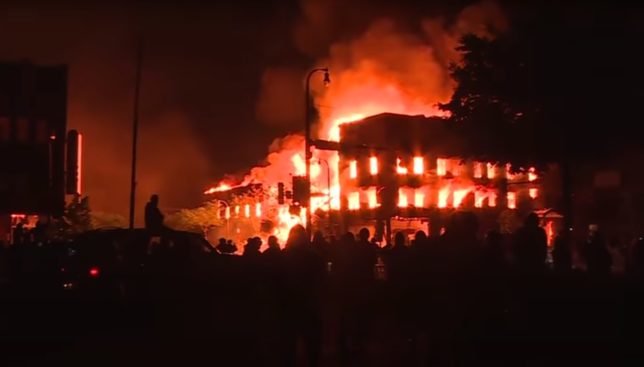 Third Precinct of the Minneapolis Police Department was torched during a protest turned riot on May 29, 2020. Credit: The Hill.
by Sarah Lee

The Department of Justice (DOJ) recently confirmed it had opened a criminal investigation into funding behind the civil unrest. While some members of Congress have called for an investigation, critics argue that any investigation would be a windmill chase because the groups in the streets were merely a loose coalition without a head or solid funding structure.

And the criticism is bipartisan, with some conservative-leaning pundits taking issue with the appropriateness of the federal government investigating the money behind “vaguely ideological” groups in the absence of larger financial crimes.

This raises the question: Why can’t several groups working together, taking money from some of the same pots, and committing the same crimes have the same goals and—in the event crimes are committed—be investigated accordingly? The DOJ deals with the appropriateness of the investigation by saying they aren’t targeting free speech but rather “coordinated, criminal activity . . . and violence related to riots, destruction of federal property and violence against law enforcement officers.”

As to the funding, it’s not exactly in the shadows, but it is confusing. But that shouldn’t disqualify it from consideration when investigating criminal activity, even if some of the associated names bring out the conspiracy theorist in even the most sober analyst.

Capital Research Center devotes a great deal of time tracking down this kind of funding and has determined how some of these groups operate.

Recently, for example, we wrote about The Tides Center—one of the members of the “$636 million “dark money” web known as the Tides Nexus, already infamous for sponsoring the creation of new activist groups in a process called ‘incubation.’”

The Tides Center recently assumed fiscal sponsorship of the Black Lives Matter Global Network—one of the groups behind the protests and riots—marking another of their many forays into anti-police funding. Other examples of that ideological bent include Fund for Fair and Just Policing, which worked to overturn the “stop and frisk” policy implemented by New York City Mayor Michael Bloomberg in the early 2000s, and the Fair and Just Prosecution, a group that seeks to “fundamentally transform” the criminal justice system by “demanding removal of police officers from schools, decriminalizing drugs, expanding the ‘definition of profiling’ to include ‘sexual orientation’ and ‘gender identity,’ and forcing police and prosecutors to ‘acknowledge and apologize for decades of racially disparate policing and criminal justice practices.’”

Then there are the newly fashionable bail funds, which arguably directly aid individuals engaged in crimes because they are used to post bail for those arrested for rioting and associated crimes. Bail funds have cropped up in many states and are notable for their promotion by celebrities and politicians. The New York Times reports that these funds, which are helpfully grouped together under the National Bail Fund Network umbrella, have taken in quite a haul since the unrest began. Reportedly, these bail funds received an astonishing $90 million in a two-week period before mid-June. Just imagine the haul now.

But the New York Times article also mentioned financial windfalls outside bail funding for several well-known racial justice groups, including the NAACP Legal Defense and Educational Fund and the Black Lives Matter Global Network (whom we’ve already met). Those groups declined to reveal to the Times how much they had profited in those windfalls.

We already know the source of much of the Black Lives Matter Global Network funding. In addition to its fiscal sponsorship by one of the Tides member groups, it also has received individual donations and corporate donations from some heavy hitters, including Coca-Cola and Nike.

And then there’s Soros, whose Open Society Foundations gives a healthy amount to the Tides Nexus. They also just recently “invested” in a $220 million push for racial justice.

It’s not a conspiracy if following the money turns up some familiar names. And the confusing nature of charitable giving doesn’t necessarily equate to “a secret, shadowy cabal.” But the confusion does make it exceedingly difficult for the average American to determine who is helping to pay for the disturbing images they see on their TVs and computers at night.