Right to Work Assailed in Missouri 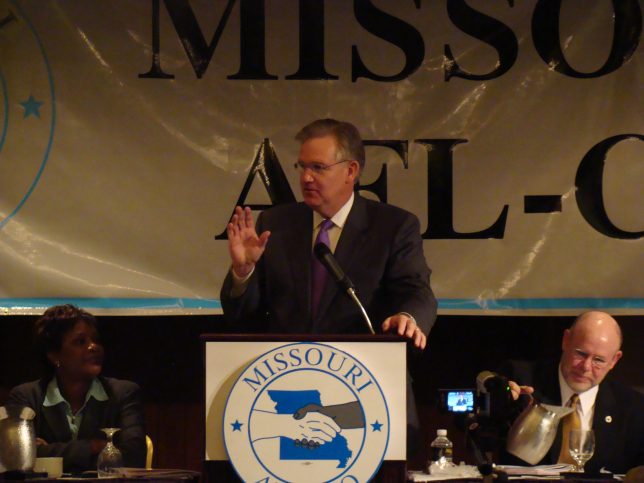 Thanks to a Washington, D.C., firm, activists tied to the AFL-CIO, a major public employees union, have gathered nearly 300,000 signatures supporting a ballot measure that would delay Right to Work legislation from taking effect in Missouri this month.

Right to Work refers to legislation freeing workers from joining or paying dues to a labor union, if they choose not to.

According to the Washington Free Beacon, the union will present the Missouri Secretary of State with the signatures on August 18, putting the battle directly in the hands of Missourians in 2018. The subsequent ballot measure would present Missouri voters with a choice between greater freedom for workers and preserving Big Labor’s grip on businesses and workers across the state. The law signed by Gov. Eric Greitens in February would make Missouri the 28th state to pass Right to Work legislation; and places the Show-Me State at the center of the fight for workers rights. As the bill, SB 19, phrases it:

Under this act, employers are barred from requiring employees to become, remain, or refrain from becoming a member of a labor organization or pay dues or other charges required of labor organization members as a condition of employment.

The “grassroots” petition campaign aims to prevent the implementation of the Missouri law and is backed by a local AFL-CIO counterpart, We Are Missouri. According to the Free Beacon, We Are Missouri paid $431,114 to FieldWorks LLC, a Washington, D.C.-based firm, to launch the petition effort. Preserve Middle Class America, a group with ties to Teamsters unions, also gave $234,736 to FieldWorks for the drive.

Rather than concede victory to Right to Work supporters, AFL-CIO relied on the FieldWorks campaign, whose prominent clients are dozens of state Democratic parties, unions, and pro-abortion Democrat-affiliates including:

For decades workers have been forced to support Big Labor, coughing up union dues with little say in how their funds are spent. Right to Work legislation opens the possibility for workers to avoid paying union dues, threatening the flow of revenue to the AFL-CIO; in response, the union’s campaign to defeat the bill casts attention on what it labels as exploitative and greedy corporations.

Capital Research Center has previously covered efforts by labor unions to subvert the Right to Work revolution that is threatening union revenues in many states. On August 3-4, Big Labor suffered another loss and workers scored a win in Mississippi, a Right-to-Work state, when employees at a Nissan auto plant voted to reject “the attempt by the United Auto Workers (UAW) to organize their factory”:

The UAW’s failure to organize the plant in Canton is an expensive setback in its flailing campaign to organize the growing auto industry in the South and border states, where Right-to-Work laws protect workers’ right to avoid joining or paying dues to labor unions… Workers in Canton weren’t fooled. They saw the demise of auto factories in Michigan, Ohio, Pennsylvania, Indiana, and California—and they chose to walk away from the UAW.