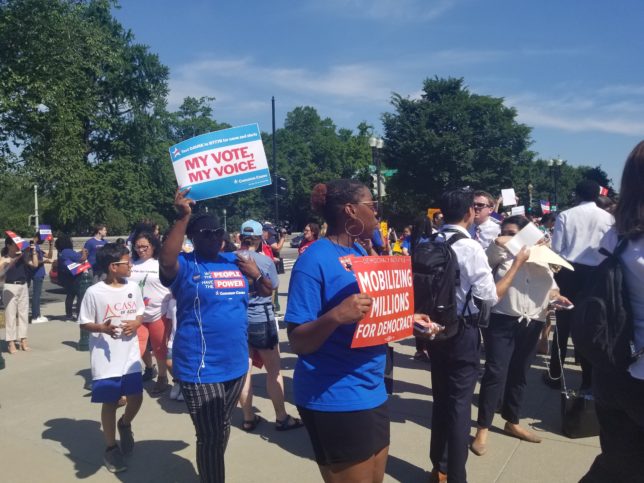 The U.S. Supreme Court was the scene of a left-wing rally Thursday as protesters from 25 different activists demonstrated against the major rulings handed down by the Court.

The rally was led by Demand Justice, a judicial advocacy group that regularly organizes protests outside of the U.S. Congress and Supreme Court. The group led many of the efforts to derail the confirmation of Justice Brett Kavanaugh to the Court last year. 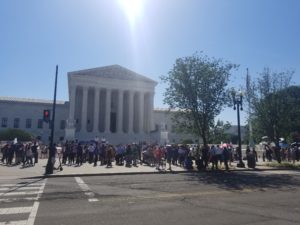 The Supreme Court handed down a mixed ruling on the Trump administration’s decision to add a citizenship question to the upcoming 2020 census, which many groups on the Left oppose. According to Chief Justice John Roberts, the federal government may lawfully include a citizenship question in the census; however, the Commerce Department (which administers the census) has not yet provided sufficient evidence to justify adding such a question to the 2020 census. 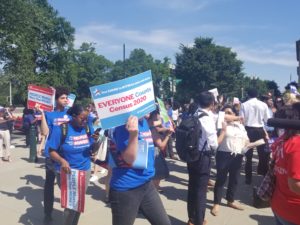 The Supreme Court also ruled in a case concerning partisan redistricting in North Carolina and Maryland that the federal judiciary plays no role in determining the legality of congressional districts drawn for political expediency (a process criticized as “gerrymandering” from both right- and left-wing advocates).

The protesters at the Supreme Court today, unsurprisingly, disagreed. A spokeswoman from the pro-illegal immigration group, Fair Immigration Reform Movement, led them in a chant of “Si Se Puede” (“Yes, We Can”), a phrase coined by labor activist Cesar Chavez, who opposed illegal immigration.

Nana Gyamfi, executive director of the Black Alliance for Just Immigration, castigated the Court’s rulings as “racist” attempts to “whitenize” America, claiming the citizenship question, in particular, was a scheme concocted by President Trump and his “white nationalist” supporters. Rep. Veronica Escobar (D-TX) added that the citizenship question was an effort “to ensure [that] people remain voiceless.”

CRC identified the following left-wing activist, environmentalist, and religious organizations at the protest: