A Preview of "Big Money" in Dark Shadows

As presidential candidates promise to refuse so-called “dark money” and Members of Congress decry the role of money in politics, a Special Report from CRC dispels one of the biggest myths in political discourse: the Left doesn’t use “dark money.”

Read the full report here and find the executive summary of Big Money in Dark Shadows below.

The political Left often criticizes—and the mainstream media frequently report on—the network of center-right nonprofits funded by billionaire entrepreneurs Charles and David Koch. But few politicos know of a left-wing leviathan in Washington, D.C., with a reach rivaling that of the Koch network.

This study by the Capital Research Center documents a shadowy web into which nearly $600 million flowed in 2017, the most recent year for which tax returns are available. Operating under the aegis of “philanthropy,” this network is housed in and staffed by a for-profit, privately held consultancy called Arabella Advisors, LLC.* Arabella manages four nonprofit entities—the New Venture Fund, Sixteen Thirty Fund, Windward Fund, and Hopewell Fund—each of which shares an address and interlocking officers with Arabella. 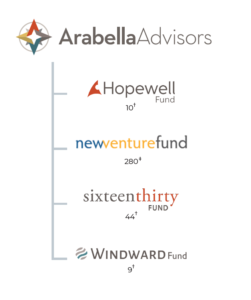 The Arabella Advisors network includes over 340 different entities/projects. The chart below lists some of the most prominent projects executed by Arabella’s four Funds.

Philanthropic advising is lucrative for Arabella, in part because its clients are so wealthy: it claims its donors’ assets are worth more than $100 billion. Between 2007 and 2017, Arabella’s four nonprofit Funds paid a combined $76 million in management fees to Arabella Advisors. Some of the nation’s largest grantmaking institutions, including the Rockefeller, Packard, and Kellogg Foundations are donors to the funds managed by Arabella. It remains unclear why such large and powerful institutions seek outside philanthropic consulting, but presumably a significant part of Arabella’s appeal lies in its ability to obscure large financial transactions.

The line between philanthropy and political advocacy at Arabella is blurry indeed. Most of the projects hosted by the four Funds and financed by Arabella’s donors advocate for controversial positions on social issues, for the expansion of government—or both. Yet thanks to the unique financial arrangements of the network and the lack of donor disclosure, it is impossible to trace which organization pays for the various campaigns and political movements spawned by Arabella’s Funds.

According to the nonprofit organizations’ tax returns, between 2013 and 2017, the Arabella network received a staggering $1.6 billion in contributions, which it has used to advance its donors’ agendas through dozens of “front” groups and “astroturf” initiatives. The Arabella network of funds is also growing rapidly: from 2013 to 2017, the network’s revenues grew by an incredible 392 percent. Arabella’s network often plays host to highly influential groups on the Left. For example, the Democracy Alliance, a network of donors co-founded by billionaire George Soros, has used the New Venture Fund and Sixteen Thirty Fund to host at least eight projects that don’t disclose their original funders. While financial information for the 2018 election year has not been disclosed, the Arabella network will likely show continued steep revenue growth. 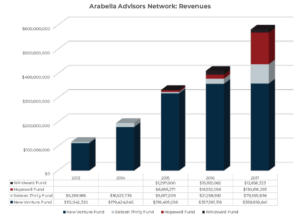 The mainstream media rarely mention any part of the Arabella empire, but in 2018 a Politico report on the Sixteen Thirty Fund—which is exempt under section 501(c)(4) of the Internal Revenue Code—described that portion of the empire as a “liberal secret-money network” in which nonprofit groups spend millions of dollars to shape elections and policy “even while criticizing ‘dark money’ and its effects on politics. . . . They have aired 6,885 broadcast TV ads [during the 2018 election campaign], according to Advertising Analytics, a TV tracking firm—more than the U.S. Chamber of Commerce and almost as many as [the Koch-supported] Americans for Prosperity, two of the five biggest nonprofit political advertisers focused on the House and Senate in the first half of this year.”

Despite the vast scope of Arabella’s influence, its “dark money” network goes largely ignored by media outlets. In the last year, mainstream outlets published 47 stories about Arabella Advisors or its four funding vehicles—most mentioning the network only in passing. In contrast, the Koch network appeared 189 times in the same outlets, and the coverage included much more thorough reporting than anything written on Arabella.**

The size and scope of the Arabella network of funds demonstrates that far more “dark money” exists on the left side of the political spectrum than has been previously admitted. Before left-of-center politicians and activists demand laws to increase government disclosure of donors who fund campaigns and public policy advocacy, they should consider voluntarily disclosing their own donors.

* “Arabella Advisors, LLC” is organized in Virginia and was originally named “Arabella Philanthropic Investment Advisors, LLC.” Despite the name change, as of April 1, 2019, the Certificate of Authority to do business in the District of Columbia is still under the original name. In addition, according to the online records of the D.C. Department of Consumer and Regulatory Affairs, Arabella Advisors, LLC (under either name) does not have a general business license to conduct business in the District of Columbia, as is required by D.C. Code §47-2851.03d(a).

† This is the number of individual projects/campaigns CRC has been able to identify.

The New Venture Fund lists the number of its various projects here.

Unless otherwise noted, all revenue, expenditure, and growth figures come from Form 990’s filed with the IRS by the nonprofit organizations from 2013 to 2017.