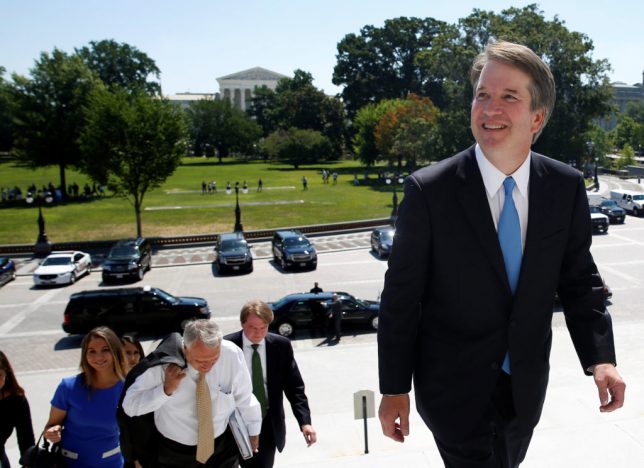 When President Trump’s Supreme Court nominee, Judge Brett Kavanaugh, stands before the Senate Judiciary committee on September 4th to begin his confirmation hearings, left-of-center activist groups such as Generation Progress will push Senate Democrats to “resist.” However, since former Senator Harry Reid removed the filibuster for Supreme Court nominees, the Democrats cannot officially block the vote. Instead, leftist groups including Demand Justice and Generation Progress lobbied for delay tactics in preparation for the November’s midterm elections.

Supreme Court justices sit on the highest court in the land for life and have the power to change preexisting laws; in recent decades appointing justices has become especially contentious. Those on the left resent that President Obama’s last Supreme Court nominee, Judge Merrick Garland, was denied a hearing, and those on the right resent a long-running pattern of judicial activism, which has paved the way for socially liberal victories such as the legalization of same-sex marriage and the preservation of Obamacare.

Regardless of which party is in power, the majority will attempt to appoint the most ideologically consistent nominee while the other side hunts and exploits every possible weakness that can be found in the nominee’s judicial record and personal life. (We’ve seen this before. In 1987, Democrats successfully derailed President Ronald Regan’s nomination of Judge Robert Bork. Learn more by listening to this episode of the InfluenceWatch Podcast.) The Kavanaugh confirmation will be no exception.

Even before President Trump made his announcement on July 9th, left-wing activist groups crowded around the Supreme Court building with a multiple-choice selection of protest signs, ready for whomever the president would pick to elevate to the High Court. Once Judge Kavanaugh was announced, the professional Left was ready with its standard operating protest procedure and a steady supply of volunteers still fuming over Hillary Clinton’s loss in the 2016 election. Generation Progress, the youth-activist arm of the Center for American Progress Action Fund (CAP Action), in particular, has been heavily involved in organizing protests and lobbying Senators.

CAP Action is the 501(c)(4) advocacy wing of the Center for American Progress (CAP), a George Soros-backed think tank founded by Hillary Clinton’s campaign chairman John Podesta. As a CAP Action program, Generation Progress advocates for an extensive platform of left-wing policies, providing a variety of means for young adults to support its agenda. For example, the Generation Progress website features routine talking-points, instructions for contacting members of Congress, and even downloadable #RESIST signs.

Generation Progress takes the position that judge Kavanaugh, a D.C. Appellate Court judge who has served for twelve years, is a dangerous extremist who must be stopped in order to preserve the “lives and the soul of this country.” What makes him such an existential threat, a danger to the spirit of America? According to their publications, he dislikes Roe v. Wade and might overturn the landmark case.

The majority of the criticism surrounds the issue of abortion, despite the fact that Kavanaugh has already called Roe v. Wade “settled law.” Neera Tandon, president and CEO of CAP, made abortion the crux of her argument when she advocated for Democratic senators to delay the confirmation in an official statement August 10th, just after Senate Republicans announced the date of the hearings. Working with other organizations such as  Alliance for Justice (AFJ), People for the American Way (PFAW), and Demand Justice, Generation Progress has orchestrated a steady campaign with young activists to delay judicial hearings for Judge Kavanaugh and lobby Senators to block his confirmation.

If abortion doesn’t energize millennials, then Generation Progress has other reasons to oppose Judge Kavanaugh. He’s fundamentally dangerous because he wouldn’t support an “assault weapons ban,” and he doesn’t think a president should be impeached before he is indicted on charges. These are reasonable conclusions, considering that Judge Kavanaugh is a Constitutional originalist—espousing a fairly mainstream scholarly interpretation of the Constitution, one popular among conservative jurists. Perhaps that is what is so dangerous to Generation Progress: his interpretation of the Constitution precludes some of the Left’s pet policy agendas. If that is the case, then it is a wonder how the country hasn’t already become a right-wing dystopic fusion of The Handmaids Tale and The Purge, since many previous and sitting justices adhere to this legal interpretation.

As recently as August 4th, Generation Progress worked with the gun control group March for our Lives to protest the National Rifle Association (NRA) at the Second Amendment group’s headquarters in Fairfax, Virginia. Many of Generation Progress’s current programs focus on limitations to the Second Amendment, such as the #Fight4AFuture Network, a national effort to promote gun control as well as address “problematic policing strategies.” These seemingly disparate initiatives are targeted to attract young adults and unite them in support of a decidedly progressive agenda. Generation Progress is using these issues to attack Kavanaugh while also building the next generation of liberal voters and activists.

On September 4th, when Judge Kavanaugh faces a barrage of accusations and hyperbole from Senate Democrats, it will be fueled by the enthusiastic activism of Generation Progress. But frankly, the protests won’t amount to much; the die was cast in 2013 by Harry Reid. Barring a major scandal, Judge Kavanaugh will become the next associate justice of the U.S. Supreme Court. Nevertheless, this effort from Generation Progress deserves attention. The activists may be young and naïve, but they are also energetic and organized. When an opportune moment arrives, they will already be veteran activists and organizers.