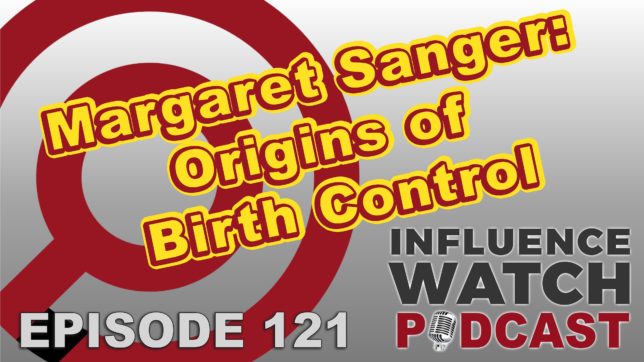 Thanks for tuning in, I’m Sarah Lee and this is the Influence Watch Podcast. In this episode, we interview Capital Research Center’s investigative researcher Hayden Ludwig on his five-part series on Margaret Sanger and her outsized influence on the modern left.

In the first part of the series, “The Birth of Birth Control,” Ludwig introduces Sanger as a proponent of population control and birth control, parts of her history that are well known and formed the basis for today’s Planned Parenthood.

From there, in “The ‘Tragedy of Overpopulation,’” he examines in detail Sanger’s desire to control who could give birth, favoring policies that weeded out what Sanger and compatriots considered undesirable people—including the poor, indigent, and mentally/physically disabled.

Part three, “Back in the USSR,” is a study of Sanger’s time in Soviet Russia, observing their appalling mass abortions and finding uneasy common ground with communists when it came to selective pregnancies.

“Sterilization,” part four, looks at Sanger’s flirtation with forced sterilizations, something she justified as necessary to achieving a better future—but only for those she deemed worthy of life.

And finally, in “The Woman Who United the Left,” Ludwig explains how these radical ideas—even as they fell out of favor for their association with Nazi Party in World War II—have never really disappeared and even show up in many of the progressive policy ideas we see today.