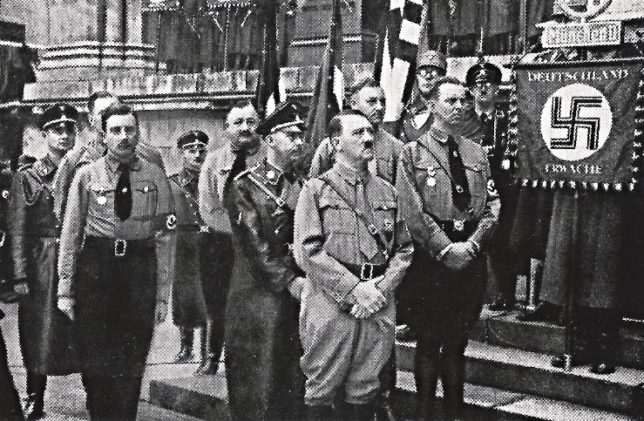 “Sterilization Should Not Be Considered a Punishment”

STERILIZATION of the insane and feeble-minded and the encouragement of this operation upon those afflicted with inherited or transmissible diseases, with the understanding that sterilization does not deprive the individual of his or her sex expression, but merely renders him incapable of producing children [emphasis original].

Sanger herself was far from coy about sterilizing the “inferior,” though she was often careful with her wording. This has led to confusion and missed opportunities among pro-life conservatives and allowed her defenders to make humanitarian claims not borne out by their heroine’s writings—writings which are usually more damning than vindicating.

Take her view of forced sterilization. To its credit, Planned Parenthood admits that Sanger endorsed the Supreme Court’s decision to uphold forced sterilization in Buck v. Bell (1927), an opinion authored by eugenics supporter and Progressive icon Oliver Wendell Holmes Jr. “We denounce her endorsement of the Buck v. Bell decision as well as her involvement with the American eugenics movement and her adherence to some of its principles and values,” Planned Parenthood adds.

The group goes on to explain dismiss Sanger’s use of the terms “fit” and “unfit” as commonplace relics of her politically incorrect era, alleging that she only applied them to individuals’ mental or physical defects, not their race or religion. Apologists offer this widely used sentence from Sanger’s voluminous writings to prove how much she loathed racism and bigotry:

I admire the courage of a government that takes a stand on sterilization of the unfit and second, my admiration is subject to the interpretation of the word ‘unfit.’ If by ‘unfit’ is meant the physical or mental defects of a human being, that is an admirable gesture, but if “unfit” refers to races or religions, then that is another matter, which I frankly deplore [emphasis added].

The quotation is also echoed by liberals in the pages of The Nation and even on a website documenting the history of eugenics, both of which defend Sanger from charges of white supremacy. But the context for the quotation is almost impossible to find online—so where did it originally come from?

I chased down the quotation to a letter from Sanger dated February 13, 1934, to Sydney L. Lasell, a Yale University freshman who sent her a questionnaire to published in the student-run paper Yale News. Lasell asked Sanger, “What are your views on the German program of sterilizing the unfit?” to which she offered her oft-quoted reply above.

Lasell was referring to Sanger’s view of the Law for the Prevention of Hereditarily Diseased Offspring (Gesetz zur Verhütung erbkranken Nachwuchses) enacted in July 1933, just seven months earlier—and six months after Adolf Hitler became chancellor of Germany, making it one of the first statutes passed by the Nazi government.

In her reply to Lasell, Sanger hailed as “courageous” the Nazi law that established genetic health courts consisting of a judge and doctor who had the power to forcibly sterilize individuals suffering from a handful of hereditary diseases and “deficiencies,” including alcoholism. By 1945, over 400,000 people were forcibly sterilized by these courts.

Interestingly, none of the conditions detailed by the law included racial or religious criteria. The Holocaust hadn’t yet begun in earnest in 1934, either. So why did Sanger feel the need to distance herself from a definition of “unfit” that included “races or religions” in her reply to Lasell?

The Nazis based their law on a U.S. model drafted by Harry H. Laughlin, president of the American Eugenics Society and a supporter of forced sterilization. Sanger and Laughlin were close allies. At a 1923 Birth Control conference in Chicago, she told Laughlin that she believed ”this conference is going to do much to unite the Eugenic Movement and the Birth Control movement, for after all they should be and are the right and left hand of one body” [emphasis added].

Yet Sanger was anything but coy about her support for forced sterilization of the “unfit.” Germany’s law sparked hot debate among eugenics groups in America and the rest of Europe, many of whom applauded Germany and demanded similar sterilization laws in their own countries. On February 7, 1934—mere weeks before Sanger penned her oft-quoted reply to Lasell—the American Birth Control League, with Sanger at its head, published a little-known press release calling on the government to sterilize “millions of individuals”:

To the average normal responsible parent, birth control is a necessity—especially in the spacing of children, or in limiting the size of the family in consideration of the mother’s health and the father’s earnings. But there are hundreds of thousands, perhaps millions of individuals in this country who have not the moral responsibility to care for children, nor to realize the seriousness of irresponsible child-bearing. These people should be sterilized. They can be classed as the moron, the mental defective, feebleminded, certain forms of insanity—where the cure is doubtful or uncertain, besides those afflicted with epilepsy and other transmissible diseases [emphasis added].

“Sterilization should not be considered a punishment,” the league declared. It even suggested that pensions be paid to “all paupers, morons, feebleminded, mentally and morally deficient persons, who will submit to sterilization.” That was, they concluded, a much better solution than “to pass them out a dole while they increase their numbers tenfold.”

Of course, that part of Sanger’s legacy isn’t quoted in Planned Parenthood’s florid biography of its founder, though it should be—her signature is printed at the bottom of the press release.

The Negro Project of the South

No picture of Margaret Sanger would be complete without reference to the Negro Project of the South, the American Birth Control League’s infamous campaign to indoctrinate “planned parenthood” among Southern blacks. Sanger’s intent with the project is hotly debated. As with much of her life, there was at least some benevolent intent to lower rates of unplanned pregnancies among one of the poorest groups in America. The project involved sending workers to the rural South to test various contraceptive jellies and other low-cost forms of contraception to reduce birthrates. It ultimately proved a failure, with few women showing up for follow-up exams, and the project was terminated in 1942.

Critics allege that the project’s true goal was the reduction or even annihilation of African Americans, and they have a good point. However, there’s more nuance to the Negro Project than is perhaps obvious at first glance.

A number of prominent black leaders supported it, including W.E.B. DuBois, Mary McLeod Bethune, and future U.S. Rep. Adam Clayton Powell Jr. Adding to the nuance was the substantial funding provided by the personal philanthropy of Albert Lasker, a German-born advertising mogul known as the “Father of Modern Advertising” and an active Republican who helped William G. Harding become president as a key adviser in his landslide victory in 1920. (Interestingly, Lasker applied his stellar advertising methods to political campaigning, teaching Republicans to sell their candidates by appealing to voters through newspaper ads, billboards, newsreels, and advertisements targeted at women who were able to vote for the first time that year.)

Much has been made of Sanger’s bitter disappointment in the project by her defenders, who unconvincingly lay the blame of any racial paternalism on others. Pro-life detractors are not free of exaggeration, either, when they quote her infamous 1939 “extermination” letter to Clarence Gamble, heir to the Procter & Gamble soap company fortune:

The ministers [sic] work is also important and also he should be trained, perhaps by the [Birth Control Federation of America,] as to our ideals and the goal that we hope to reach. We do not want word to go out that we want to exterminate the Negro population and the minister is the man who can straighten out that idea if it ever occurs to any of their more rebellious members [emphasis added].

Put in full context, Sanger’s supposed call to “exterminate the Negro population” is actually her ham-fisted effort to dispel genocidal fears. She was trying to head off the accusation of extermination by addressing it in her letter, not demand it. (Gamble, a eugenics supporter, deserves scrutiny as the founder of Pathfinder International, a multi-million-dollar population control funder that has received nearly $1 billion in federal funding in the last decade.)

Instead, critics ought to consider an almost unknown quotation Sanger wrote in 1912 that offers a far better insight into the young (and less politically savvy) activist’s view of non-whites as little better than compulsive rapists:

It is said a fish as large as a man has a brain no larger than the kernel of an almond. In all fish and reptiles where there is no great brain development, there is also no conscious sexual control. The lower down in the scale of human development we go the less sexual control we find. It is said that the aboriginal Australian, the lowest known species of the human family, just a step higher than the chimpanzee in brain development, has so little sexual control that police authority alone prevents him from obtaining sexual satisfaction on the streets. According to one writer, the rapist has just enough brain development to raise him above the animal, but like the animal, when in heat knows no law except nature which impels him to procreate whatever the result [emphasis added].

In the next installment of “The Legacy of Margaret Sanger,” see the massive influence Sanger has had on the Left.