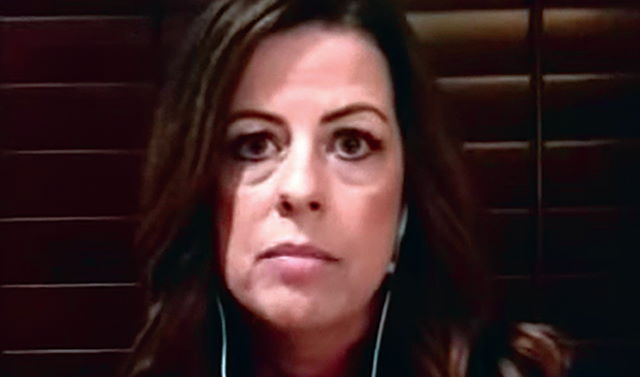 McGinnis’s mother Nikki Sterling discovered a few weeks after the death of her son that Travis Lang, who already had the three pending felony charges when he murdered McGinnis, was somehow back on the street Lang was released from jail on bond, paid by the Bail Project. Credit: Terrier Video. License: https://bit.ly/3ok2f3p.
by Sarah Lee

Nikki Sterling, Dylan’s mother, graciously gave CRC her time for an interview as she prepared to travel to Indiana, the state where her son was murdered last year, to testify before the state house and senate in support of legislation to, among other things, change who these charitable bail organizations are allowed to help release from jail. Here are her words that she hopes will do some good in the aftermath of her son’s passing.

SARAH LEE: Tell me what you understand about your son Dylan’s death.

NIKKI STERLING: All I know about what happened is what I was able to read in the probable cause and affidavit statement, I haven’t spoken with the young lady he was with that evening. . . .

I have to say, first, that Dylan was such a great person, he would have helped anybody. That’s just the type of person he was. He was a protector. This young lady was setting out to make a drug deal with the guy that shot Dylan, and a friend that he texted said he expressed concern about going along with her. But he was trying to help her get back on her feet.

In my mind, I think what would have driven him to go, and I think he want her to go by herself. He went to keep her safe. His autopsy showed he had no drugs in his system. He had no alcohol in his system. This wasn’t his deal. He was a beautiful person.

So she was driving his car. He was in the passenger seat. They went and picked up the assailant. She began recording the conversation on her phone because she was afraid he was going to rob her. Lang had made demands about going to different locations. . . .

An argument broke out about the cost of the drug deal. She was willing to pay $60. Lang wanted $80. He pulled out a gun. In the probable cause and affidavit, it says you could hear a struggle, and while this is going on between she and Lang, my son is heard in the recording apologizing and trying to deescalate the situation. She kicked [Lang] out of the car, and he was on my son’s side when he fired nine shots into the car. Two of those bullets were fatal to my son.

LEE: Tell me what happened after the incident. When did you realize Lang had posted bail? And then when did you find out he had other crimes on his record when he was released?

STERLING: We were in Indiana for about three weeks, and he was arrested right before we flew back to Arizona. I received a call saying that [Lang] had been in jail and had three pending felonies and had been bailed out by this organization called the Bail Project.

I had never heard of the Bail Project. The records are public, so we went online and looked at his criminal history. And then we started looking into the Bail Project. And that’s how it all began to surface. It’s a charitable bail organization [that takes] in donations and use taxpayer dollars to help secure bail for certain individuals. And their mission is to fight mass incarceration and provide bail for low-income individuals.

But they don’t look at the criminal history of the people they’re bailing out. That doesn’t come into play when they’re getting people out of jail. And I’m just shocked. I’m thinking to myself: Indiana was at their all-time high homicide rate in 2021.

It also surfaces that this is not the first time this has happened in Indiana. It previously happened in August 2021 with a man named Marcus Garvin, who got out of jail and killed his girlfriend.  He had been in jail on felony charges as well. And then in December, another individual was bailed out and he went on to ambush and stab two police officers. Luckily, they didn’t die.

It also came out that there was a bill in early 2021 to start regulating charitable bail orgs, so we reached out to the former senator who presented it to ask what we would do to help.

I understand [the Bail Project’s] mission of aiding individuals, but where does that stop? They are crossing the line from bailing out individuals on small charges and really putting violent criminals back on the streets. They don’t hear about their criminal history. There is no oversight. Lang, once he bailed out, there was no accountability to the Bail Project, and no oversight of Lang by the organization. Only the promise that he would return for his court hearing. It’s become a revolving-door system.

LEE: What’s interesting about the fact that the only requirement is that those bailed return for their court date is because the Bail Project has an interest in making sure that happens because they don’t get reimbursed for the bail they put up otherwise, isn’t correct?

STERLING: That’s right. They get the full amount back.

LEE: Tell me about the legislation you’re supporting in Indiana.

STERLING: SB 8 is the bill will regulate the type of offenders these organizations can bail out. It will prohibit them from bailing out felons, and proposes a $2,000 bail bond cap. That is the bill we’re supporting. We’re actually traveling back to Indiana to testify in front of senate and house in support of that bill.

LEE: I’m sure you were aware during the George Floyd riots, a lot of celebrities and our VP supported some of these charitable bail organizations. What do you think about that?

STERLING: On the bail project advisory board, you see celebrities’ names, and I know the vice president was supportive of the Minnesota Freedom Fund. But this isn’t an isolated event in Indiana. Nationwide this is becoming a problem. And I know police departments are stretched.

Fortunately, my case was solved thanks to eyewitnesses and a recording. But many are not, I think if they were, we‘d see that more crimes are being committed by people released in this way. If you have a revolving door system in place, you’re hurting the people trying to protect us and increasingly hurting the people who are most vulnerable—the people who these organizations say they are trying to protect.

LEE: What do you make of the many progressive DAs who favor policies and programs like the Bail Project?

STERLING: A DA in New York I think was pushing for this. It’s something that I can only really look at from a mother’s perspective. I know there are people pushing for these organizations, but they’ve never walked in my shoes. If they’d been put in the position I’ve been put in, they would see it from a different perspective, and that’s the really the most I can say. I can’t wrap my brain around why you think it’s ok to put violent offenders back on the streets.

LEE: Do you think concern about the release of violent criminals is really a political issue?

STERLING: This isn’t political or about race. It’s about doing the right thing to protect the public. I know another person in Indiana whose son was ambushed and murdered in New York. But when I saw the DA was pushing a set of criteria that basically said someone could literally commit armed robbery, but as long as no one was harmed, they would be treated as less than violent criminals. . . . How is that ok?

In Indiana, I know police and detectives are stretched. I’m fortunate because my case was solved, because we had eyewitnesses and the recording. But there are cases that are unsolved. If you have that revolving door in place, you’re only hurting the people trying to protect the citizens. If more crimes were solved, I feel like we would see more cases involving people who were bailed out by a charitable bail organization. I don’t think anyone in jail on pending felony charges should be able to be bailed out by a charitable bail org.