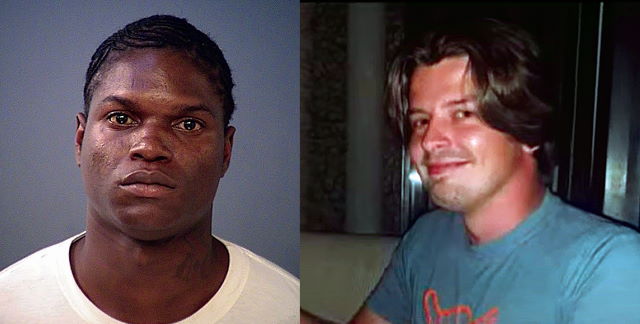 In October 2021, a young man with three pending felony charges sat in jail in Indiana, but not for any of those crimes. Instead, 23-year-old Travis Lang had been rearrested after firing nine bullets into the side of car and killing 24-year-old Dylan McGinnis, who had accompanied a troubled young lady on a drug deal gone wrong. Travis Lang (left) credit: IMPD. License: https://bit.ly/3KImX6f. Dylan McGinnis (right) credit: Terrier Video. License: https://bit.ly/3rSUiCS.
by Sarah Lee

Summary: Charitable bail organizations such as the Bail Project and the Minnesota Freedom Fund use donations and taxpayer dollars to help pay the bail of those facing charges. They gained prominence during the George Floyd protests throughout the summer of 2020. Celebrities and Democratic politician promoted these charitable bail organizations as a means to achieve some measure of “social justice.” However, they have frequently become entangled in controversy as numerous suspects released on bail were rearrested for allegedly committing additional crimes, including murder. One victim of such a crime was Dylan McGinnis, whose mother Nikki Sterling was recently interviewed by CRC’s Sarah Lee.

In October 2021, a young man with three pending felony charges sat in jail in Indiana, but not for any of those crimes. Instead, 23-year-old Travis Lang had been rearrested after firing nine bullets into the side of car and killing 24-year-old Dylan McGinnis, who had accompanied a troubled young lady on a drug deal gone wrong.

Lang, who already had the three pending felony charges when he murdered McGinnis, was somehow back on the street—a fact that McGinnis’s mother Nikki Sterling discovered a few weeks after the death of her son. Lang was released from jail on bond, paid by the Bail Project.

The Bail Project, an organization that purports to help the disadvantaged by covering up to $5,000 on a surety bond and advocates for the long-term effect of reducing mass incarceration, had paid for Lang’s release.

The Bail Project is active in 17 cities and receives funds from Borealis Philanthropy. Team members are called “bail disruptors.”

But the Bail Project, like other charitable bail organizations that use donations and taxpayer dollars to help fund the release of those facing charges, doesn’t necessarily provide any oversight once they help secure someone’s release. What’s more, it apparently has little interest in the criminal history of those it helps put back on the streets.

Charitable bail organizations were quite the cause célèbre during the George Floyd protests throughout the summer of 2020. Celebrities and even Democratic vice-presidential nominee Kamala Harris flocked to social media to encourage people to give money to help secure some of the rioters’ release from jail.

What many may not have realized is that these organization have overtly activist agendas, as Sterling discovered about the Bail Project, and are interested in doing far more than simply advocating for the poor or working toward a progressive-left vision of criminal justice reform. The group openly claims that paying bail for those jailed is an “act of resistance against a system that criminalizes race and poverty.”

In September 2020, a Bail Project staffer named Holly Zoller was seen at a violent Black Lives Matter–associated demonstration in Louisville, Kentucky. She had in her possession a U-Haul truck that a Daily Caller reporter noted at the time contained “supplies such as signs, shields, [and] water.”

Later fact-checkers noted, “Some of the signs bore logos associated with antifa.”

The Bail Project is not alone in its work. Several other organizations that seek to put criminals back on the streets, often regardless of prior charges. Here are some of them and their funders as documented in Capital Research Center’s InfluenceWatch database.

Minnesota Freedom Fund. Founded in 2016 by University of Minnesota student Simon Cecil, the Minnesota Freedom Fund (MFF) is a nonprofit bail-fund organization based in Minneapolis. Before the death of George Floyd on May 25, 2020, it focused on posting smaller bonds for Minnesota-area inmates. During the first half of June 2020, it raised over $30 million in donations, likely helped by a tweet from vice-presidential candidate Kamala Harris. 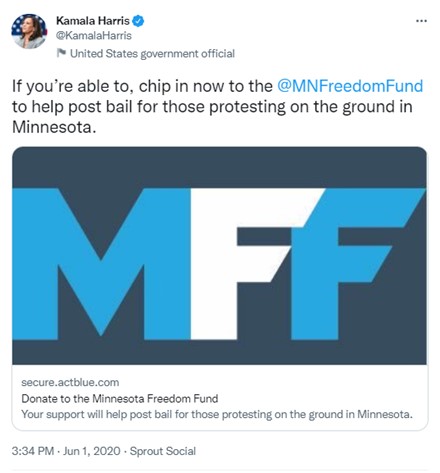 As with other bail fund groups, its posting bail for persons accused of violent crimes has led to multiple controversies, including the release of an alleged domestic abuser who has since been arrested and charged with second-degree murder in a road-rage shooting in August 2020.

It has also pushed controversial progressive-left policies, including defunding the police and releasing prisoners from jails due to the COVID-19 pandemic.

It was also involved in a controversy involving payment for undisclosed trips by St. Louis Circuit Attorney Kim Gardner in 2017.

Fund for Fair and Just Policing. Founded in 2011 as a part of Tides Advocacy—the 501(c)(4) arm of the Tides nexus of entities—the Fund for Fair and Just Policing is a joint project of Atlantic Philanthropies and Open Society Foundations. In 2013, the FFJP received $2.2 million from Atlantic Philanthropies through one if its U.S.-based 501(c)(4) groups, the Atlantic Advocacy Fund. The grant was used to support opposition to “stop and frisk.” In 2015, FFJP granted $8 million to support Communities United for Police Reform, which opposes police practices such as “stop and frisk” and has supported calls to defund the New York City Police Department.

Reclaim the Block. was organized in 2018 as a coalition of Minneapolis-area activists who pressured the Minneapolis City Council to reallocate over $1 million for proposed police hires to social programs and training. Launched after the 2017 MPD150 project (the 150th anniversary of the Minneapolis Police Department), they released a 36-page report providing a radical-left interpretation of the history of law enforcement. A core finding was that the police were established to protect the interests of the wealthy and that radicalized violence has always been a part of that mission. It insists on the eventual abolition of the city’s police force.

In short, Reclaim the Block was uniquely suited to capitalize on the death of George Floyd.

Black Visions Collective. Kandace Montgomery founded Black Visions Collective with other Black Lives Matter (BLM) Minneapolis organizers. The network has focused on disbanding and defunding the police. This network also has connections with Antifa through Unicorn Riot and to Angela Davis, about whom CRC President Scott Walter wrote:

Angela Davis is so important to BLM co-founder Patrice Cullors that she asked Davis to write her memoir’s foreword, where Davis sneers at the fact ‘Assata Shakur was designated by the FBI one of the world’s ten most dangerous terrorists.’ Davis applauds the way Black Lives Matter ‘has encouraged us to question the capacity of logic—Western logic—to undo the forces of history, especially the history of colonialism and slavery.’ Davis twice ran for Vice President on the Communist Party USA ticket during the days it was controlled by the Soviet Union. Her short book Are Prisons Obsolete?, which predates BLM’s founding by over a decade, is praised in Cullors’ memoir.”

In Part 2, hear what Dylan McGinnis’s mom has to say about the murder and his arraigned murder’s release on bail.