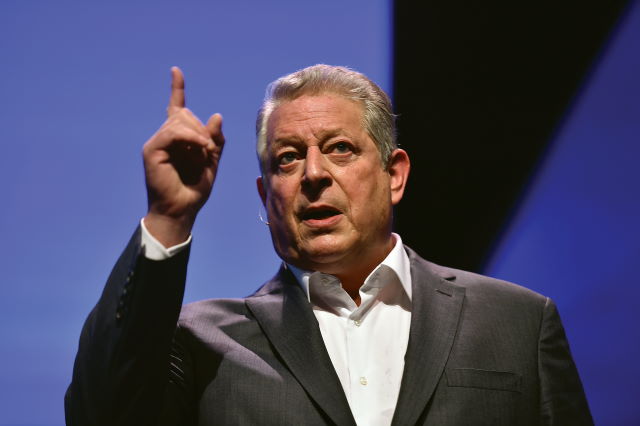 By “galvanise,” Skoll really meant “gin up a public panic around alarmist and exaggerated predictions of Doomsday.” Skoll’s film company, Participant, has produced numerous films with this theme, but none so infamous as the first: Al Gore’s An Inconvenient Truth (2006). Credit: Collision Conf. License: https://bit.ly/3asEHmw.
by Ken Braun

Participant also rolled out a “social impact campaign” for Slay the Dragon, which was similar to the arrangement with the Sierra Club for promoting Al Gore’s An Inconvenient Sequel. The campaign provided screenings of the film to potential activists and partnerships with Voters Not Politicians in Michigan and similar left-leaning organizations in other states.

Most Hollywood studios veer to the left merely because of cultural gravity. What sets Participant apart is its willingness to aggressively partner with lefty organizations to promote the agenda of the films. Climate alarmist films such as Merchants of Doubt and Last Call at the Oasis have been paired with campaigns promoting left-leaning climate policy organizations such as 350.org, Greenpeace, the Environmental Defense Fund, the Natural Resources Defense Council, and the Sierra Club.

The radical-left political squatters of Occupy Wall Street were celebrated in 99%: The Occupy Wall Street Collaborative Film. For this 2013 film, Participant created an issue campaign promoting Represent.us, a left-leaning organization seeking tighter restrictions on the funding of political speech. Three years later the failed presidential campaign of Democrat Hillary Clinton spent $768 million, almost double that of Republican rival Donald Trump, according to the Washington Post. And during the 2020 election cycle, according to data compiled at OpenSecrets.org, Jeffrey Skoll personally forked over at least $11 million to two federal committees promoting the election of Democrats: $7 million to Senate Majority PAC, and another $4 million to Priorities USA Action. (Canadian-born Skoll’s direct political giving in the United States appears to have been smaller in prior years, likely because he reportedly did not become a U.S. citizen until 2007).

One might guess from all this mixing of lefty missions among the Skoll properties that Participant has been more of a fringe filmmaker and not a producer of well-known features.

That guess would be wrong.

Of the at least 114 films produced in the history of Skoll’s studio there are a few recognizable titles starring A-list talent, compelling stories, and far less bulky political pills to choke down. Examples include Charlie Wilson’s War (starring Tom Hanks and Julia Roberts), Lincoln (Daniel Day Lewis), Bridge of Spies (Tom Hanks again), and 7 Days in Entebbe, a dramatic retelling of the “most daring rescue mission ever attempted”—the 1976 Israeli commando raid that freed hostages held in Uganda).

Even among the documentaries there is Waiting for Superman (2010), a brutally frank criticism of public education and teacher unions widely celebrated by right-of-center reformers such as the Heritage Foundation.

But tellingly, the social impact campaign Participant created for the Superman did not include Heritage or any of the many right-of-center education reformers on the list of “Organizations Making a Difference.” The Participant campaign did point viewers to the Ford Foundation, one of the nation’s wealthiest and oldest funders of resolutely left-wing politics and public policy.

With the left side of U.S. politics too closely aligned those teacher unions for too long, the strongest education reform energy over the last few decades has been with the right-center advocates of parental choice. An astute and suspicious observer of this fact might be on solid ground in suspecting Participant’s social media campaign for Superman was a conscious effort to steal some of that momentum away from the right-center opposition.

And that’s not the only tactic a clever pattern-seeking primate might notice.

Recall the 2013 profile in The Guardian that identified even Skoll’s “blockbusters” as having “political or social messages.” The road to winning the war for American culture obviously has routes running through Hollywood. The slick agitprop celebrating Al Gore and Occupy Wall Street probably doesn’t pay the bills and may not create enough of a pipeline into the mass audiences that go to the movies for pure escapist fun. Participant’s forays into popular, less political action films—the “blockbusters”—are a feature, not a bug, of Jeffrey Skoll’s strategy to shove America further left.

In his 1998 book Hollywood Party: How Communism Seduced the American Film Industry in the 1930s and 1940s, journalist Kenneth Lloyd Billingsley wrote that “Stalin reportedly claimed he could easily convert the world to Communism if he controlled the American film industry.” The Soviet dictator was improving on the observations of his predecessor, Russian communist revolutionary Vladimir Lenin, who looked upon the then-infant film industry of the 1920s and declared that “of all the arts the most important for us is the cinema.”

This analysis of Participant and the Skoll network began with an anecdote from that era about the misadventures of the Soviet-controlled Hollywood Anti-Nazi League. Jeffrey Skoll should obviously not be mistaken for a communist threat, let alone one on the level of the Soviet Empire, or even a revolutionary menace of any sort. But his integration of a left-progressive funding empire with a film production company replicates a lot of the same business model.