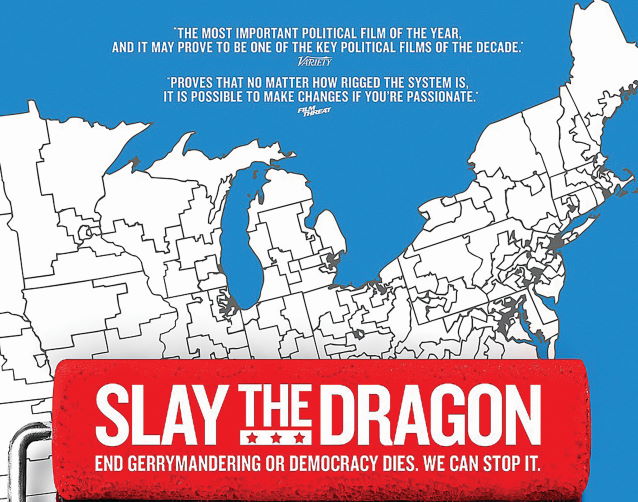 Viewers not in the know might watch Slay the Dragon (released by Participant in 2020) and come away thinking they have witnessed a victory against legislative gerrymandering by underfunded, apolitical grassroots citizen-activists in Michigan who vanquished sinister political professionals. Credit: The Bottom Line. License https://bit.ly/3h3aStY.
by Ken Braun

For landlubbers, Participant released Promised Land in early 2013, a propaganda effort aimed at killing the U.S. natural gas boom while it was still in its infancy. The fictional drama was produced by and starred Matt Damon and John Krasinski. (Jeffrey Skoll is credited as an executive producer.)

In the years since the film’s release the American energy boom has made the U.S. a dominant world energy producer for the first time in decades and the functional equivalent of energy independent for the first time in the lifetime of nearly everyone alive. Falling prices for abundant domestic natural gas also led electricity producers to switch away from using coal as their base fuel.

For each unit of energy, burning natural gas emits 50 percent less carbon than coal. Not coincidentally, the International Energy Agency reports total U.S. carbon emissions in 2019 were 5.4 percent lower than in 2013, despite a growing economy and population.

To portray all this wonderfulness as something sinister, the Promised Land plot cooked up alarmist and fabricated concerns about the safety of hydraulic fracturing (“fracking”), the drilling technology that made the boom possible. The film portrays a fictional energy firm that hatches an elaborate “enemies are hidden everywhere” conspiracy to conceal the alleged fracking dangers from small town landowners.

But again, because this is Hollywood leftists trying deliberately to be leftists, there appears to have been a real-life conspiracy even more absurd and hypocritical than the on-screen fiction.

The Heritage Foundation’s Daily Signal reported that Promised Land was partially financed by “Image Media Abu Dhabi, a subsidiary of Abu Dhabi Media.” The report unpeeled the corporate onion layers and revealed Abu Dhabi Media to be a “wholly owned” enterprise of the government of the United Arab Emirates (UAE). At the time, the UAE ranked “seventh worldwide in proven natural gas reserves.”

So, Promised Land’s financiers had absolutely every motive on Earth to prevent the booming U.S. domestic energy industry from muscling in on their global oil and gas market share. Just as the top Hollywood names of the 1930s were duped into serving as stage props for Joseph Stalin, more than 75 years later Matt Damon and John Krasinski had stumbled into becoming useful idiots for OPEC.

The Real Joke Is on the Audience

Hiding highly relevant yet inconvenient facts are a feature of other Participant documentaries.

Viewers not in the know might watch Slay the Dragon (2020) and come away thinking they have witnessed a victory against legislative gerrymandering by underfunded, apolitical grassroots citizen-activists in Michigan who vanquished sinister political professionals. At one point the film shows a leader of the deceptively named Voters Not Politicians (VNP) ballot campaign somberly speculating that the allegedly big money political establishment will outspend VNP by at least 4 to 1. And VNP founder Katie Fahey is presented as a newcomer to the political process who “doesn’t do politics for a job.”

Swallowing this narrative with extra-credulous gulps, a reviewer for the Philadelphia Film Society wrote that Slay the Dragon was “More than just a David versus (an absurdly huge, rich, powerful, and amoral) Goliath story.”

Indeed, so much more! It was also a complete lie.

The Dragon audience is not told about the $13.9 million Voters Not Politicians spent to pass their amendment to the Michigan Constitution. Bridge Magazine, a Michigan political news website, characterized the sum as a “staggering” total, with “much of it” coming in “from out-of-state dark money groups with a history of supporting Democratic causes.”

And who was Katie “Dark Money” Fahey’s biggest funder, chipping in $5.5 million? That would be the Sixteen Thirty Fund, yet another of the four left-wing nonprofit subsidiaries spinning around the aforementioned Arabella Advisors network. Recall that the New Venture Fund, another Arabella satellite, received at least $20 million from Skoll’s foundations.

What a coincidence. Why wouldn’t the documentary produced by Skoll’s film company mention this big chunk of establishment cash falling into the lap of the supposed “Davids” fighting the alleged “Goliath” in Michigan? Perhaps for the same reason the film didn’t tally up the nice checks to VNP from other reliable left-leaning donors, such as the National Redistricting Action Fund, affiliated with the National Democratic Redistricting Committee; the National Education Association; and SEIU United Healthcare Workers West (Local 2005), a California-based affiliate of the national lefty labor union famous for its purple t-shirts and its aggressive and often illegal tactics.

Then there is the alleged big money establishment, which raised just $3.2 million, all of it from Michigan sources. Katie Fahey and VNP received $2.2 million more than their opponents from just the out-of-state lefties at the Arabella. And adding it all up, VNP enjoyed a funding advantage of more than 4 to 1.

This was precisely the opposite of the 4 to 1 disadvantage portrayed in the film. The film coyly never mentions any of the actual funding numbers. Getting this central fact exactly backward was either overwhelming incompetence by the filmmakers (and executive producer Jeffrey Skoll) or simply a deliberate lie by omission.

But that all aside, just how could Katie “doesn’t do politics for a job” Fahey rake in such sums for that 2018 campaign?

The end of the Slay the Dragon shows a euphoric Fahey at the November 2018 VNP victory party. What doesn’t make it into the film is what happened almost precisely two years earlier, the morning after the November 2016 election. That morning the Associated Press reported on Hillary Clinton’s concession phone call to then President-elect Donald Trump, and quoted the reaction of just one attendee of Clinton’s ill-fated “victory” party:

“My disappointment makes me not trust the rest of the world,” said Katie Fahey, who had flown to New York from Grand Rapids, Michigan, wearing a red pantsuit, expecting a victory party. “I don’t even want to go out. I want to wear sweatpants and curl myself up in a corner.”

It seems at least plausible Fahey already had important political contacts that went missing from the Slay the Dragon plot. The jokes about Hollywood’s leftist agenda are often more at the expense of the audience than the filmmakers.

In the next installment of “Dragging Hollywood Even Further Left,” see how Participant finances it’s few leftist films by producing dozens of successful films with minimal political deadweight.