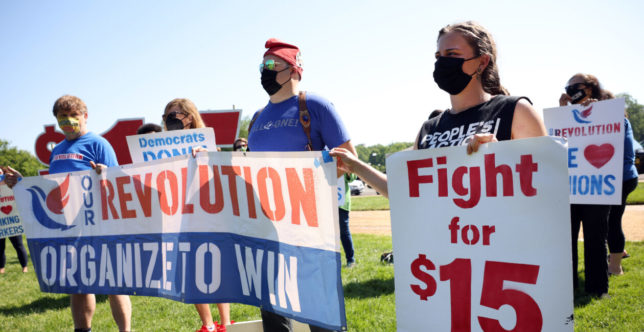 The core of the Biden administration and Democratic-controlled Congress’ legislative agenda is a $3.5 trillion tax-and-spend bill.

And while much attention has been paid both to the astronomical price tag (equivalent to more than three-fourths of the entire cost of World War II) or proposed provisions like a major expansion of legal status for illegal immigrants, less has been paid to how the bill proposes to fundamentally reorient power in the economy from workers and employers to labor union bosses.

Democrats hope to get as much of the Protecting the Right to Organize Act (aka PRO Act) into the bill as Senate rules allow. Using the reconciliation process allows the Democratic majority to bypass a Republican filibuster on a party-line vote.

As of now, radical proposals—including eliminating state right-to-work laws, granting unions the power to strike “secondary” businesses not directly party to a labor dispute, and allowing the National Labor Relations Board to deem a union the winner of an organizing election it lost—are not part of the reconciliation package, but other proposals from the PRO Act are, as are backdoor efforts to force more workers to fund union politics with which they do not agree.

The Institute for the American Worker has produced a backgrounder on the union favors that the House of Representatives has included in its version of the bill, and there are a number of them.

The most cynical favor comes from the Ways and Means Committee, which added an above-the-line income-tax deduction (that is, a deduction from taxable income available to filers who take the standard deduction and do not itemize) for union dues, but not for mandatory union fees.

This isn’t a semantic distinction; it’s a backdoor effort to reduce the net cost of union membership in non-right-to-work states, such as California, New York, and New Jersey.

A right-to-work law limits unions’ ability to profit from their monopoly representation of workers; under right to work, they gain only the monopoly power and cannot force unwilling workers to fund the “representation” the union forces them to accept.

In states such as California, New York, and New Jersey that lack right-to-work protections, unions can force unwilling workers to pay so-called agency fees that cover a portion of the dues that is essentially everything but the portion going toward political activities.

By making dues, but not fees, deductible, congressional Democrats are subsidizing unions’ political activities. Given that an estimated 99% of the roughly $1.6 billion that unions spent on nonelectoral political activities supported the institutional left, the motivation should be obvious.

The reconciliation bill also would use financial schemes to enact certain provisions of the PRO Act. The PRO Act would enable the National Labor Relations Board—the federal government’s union management quasi-judicial and quasi-prosecution service—to place civil penalties on employers who infringe the strict rules governing union organizing. (Under current law, employers are liable for back pay for workers who are wrongly fired or disciplined and can see union elections re-run if the employer committed an infringement.)

The reconciliation bill adopts that proposal. And because fines are (possibly tangentially) budgetary, Congressional Democrats are using the NLRB’s new fining power to enact other portions of the PRO Act. The reconciliation bill would increase penalties for “misclassifying” workers as independent contractors instead of employees.

Unions want those penalties because they can force employees, but not contractors, to accept union representation and in non-right-to-work states, to pay the agency fees discussed earlier, but the effects of tightening contractor classifications would be the end of numerous forms of freelance or “gig” work, as Californians discovered when they had to patch their union-drafted AB 5 law.

California’s law established a new three-part test determining whether workers were contractors or employees that is replicated in the PRO Act. The effect of the law was immediate and severe: Ride-hailing companies (the principal targets of the legislation) vowed to leave the state if the law was not modified, freelance journalists for the liberal Vox Media lost their paychecks, and other freelance workers’ employment went into limbo.

The state later patched the law for certain politically connected industries, while voters passed Proposition 22 to supersede AB 5’s application to ride-hailing drivers, though the unions have sued to block it.

And while the reconciliation bill does not adopt the PRO Act’s grant of the power to strike secondary businesses, it does increase unions’ strike power by banning hiring permanent replacement workers and banning employer-initiated lockouts.

The bill also unbalances organizing campaigns in favor of unions by banning employers from presenting the drawbacks of unionization and by requiring employers and states receiving federal “Direct Care” grants that will fund training and support for home health care workers, hospice workers, and other caregivers not to oppose unionization.

The PRO Act would fundamentally alter employment relations in the United States to benefit the labor unions that are key benefactors of the Democratic Party and the institutional left, but even a Democratic trifecta would have to overcome a filibuster to enact it.

So, to push their agenda, the Democrats have advanced a diet-cola version of the PRO Act under reconciliation. It tastes just as bad as the original.

This article originally appeared in the Daily Signal on September 29, 2021.