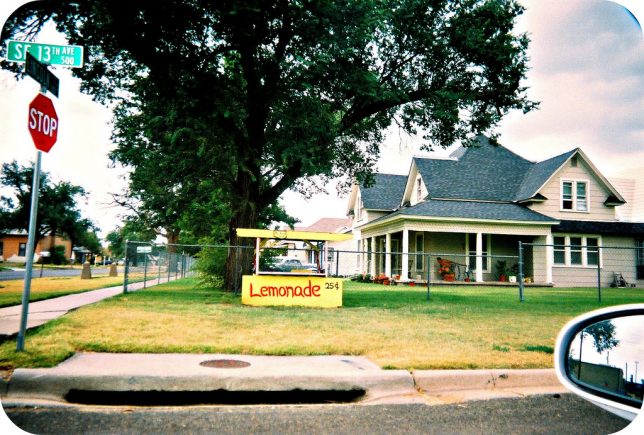 It’s finally summertime. Pools are open, barbeques are fired up, and kids are out of school. All over the country, children are doing odd jobs like working at ice cream shops. Others try their hand at the time-honored tradition of building stands with flashy signs to sell their ice-cold glasses of lemonade to passers-by. Lemonade stands are an iconic staple of the summertime lifestyle, but also a great learning opportunity for children. They teach the importance of entrepreneurship, responsibility, and financial skills—not to mention social skills and the importance of good customer service. Who could possibly object to that?

You’d be surprised. According to state and local authorities around the country, kid-run lemonade and small concession stands are in breach of the law because they lack the proper occupational licensure.

On May 29, three young brothers set up a lemonade stand in the park across from their house. The oldest of them was six years old and just learning basic math and money-valuing skills. They, along with help from their mother, decided to donate all the stand’s proceeds to a charity fund for a little boy in Indonesia.

Not long after opening the stand, though, the police showed up to respond to a complaint about the stand—made by a vendor at the nearby art show. The boys were told they could no longer sell lemonade because they did not have the proper permit to operate a stand.

This is not the first time something like this has happened. In fact, incidents involving the occupational licensing of lemonade stands have become more commonplace in recent years. For instance, in 2011, Forbes published an article describing a case where two lemonade stands in Coralville, Iowa, were shut down for not having a $400 operating permit. The article also described a group of girls in Midway, Georgia, who lacked a “business license, peddler’s permit, and a food permit.”

According to the Freedom Center of Missouri, a free enterprise nonprofit, this problem goes back to the late 1980s. The group has even put together a national heat map showing localities which restrict stands such as these from operating without permits. 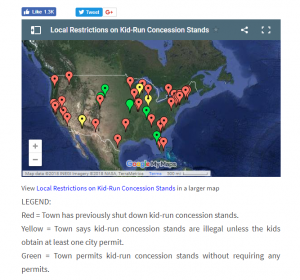 After the story of the Denver boys came out, beverage company Country Time decided to take a stand for the little guys. The company created a website called Country Time Legal-Ade, where it’s pledged $60,000 to help victimized lemonade stands across America. Parents and legal guardians can register their children’s (unpermitted) lemonade stands and receive up to $300 for fines acquired, and help with acquiring a permit to operate the stand.

“Life doesn’t always give you lemons,” says Legal-Ade on its website, “but when it does, you should be able to make and share lemonade with the neighborhood without legal implications.”

The offer is only valid through August 31, but Country Time will continue donating money to help children in similar situations in the future.

This may seem like a cute and effective public relations tactic to endear Country Time to consumers, but complicated occupational licensing problems affect more than entrepreneurial children on summer vacation. Onerous occupational licensing requirements on everything from floral arrangements to hair braiding prevent thousands of Americans from pursuing careers and opening businesses.

The process for obtaining licensing permits created by state and local governments costs both time and money. These regulations, often put in place by rent-seeking professionals who want to capture a share of the market, hurt underserved communities the most. Think ex-convicts and individuals with limited education.

Country Time Legal-Ade, while championing the entrepreneurial spirit of America’s youth, is also highlighting a real problem and making it easy to understand why occupational licensing in many industries deserves a thorough rethink.