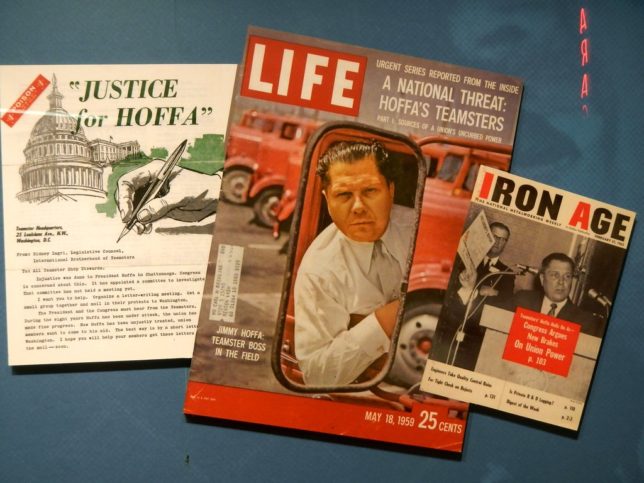 But as this survey of recent history shows, the temptation to raid workers’ pension funds, union dues funds, and health benefit funds is as true today as it was before Jimmy Hoffa went to the Machus Red Fox in 1975. Credit: PunkToad. License: https://bit.ly/3toKceg.
by Michael Watson

Indictments from the Pages of Labor History

Proving the old adage that “the more things change, the more they stay the same” were two indictments handed down by federal prosecutors this summer which seemed pulled from the pages of labor history. The first targeted a racketeering scheme on the docks of San Juan, Puerto Rico, in which the president of a local of the International Longshoremen’s Association and three others allegedly ran a labor peace extortion racket targeting shipping companies seeking to unload at the port of San Juan.

The feds allege the defendants ran a scheme reminiscent of the days of On the Waterfront, with the union boss, two stevedore company agents, and a port authority employee conspiring to extort five-figure payments from shipping companies “under the threat of strikes and blockades on the part of union members of the ILA-1740 of the International Longshoremen’s Association, AFL-CIO, and under false representations that companies had to pay a fee in order to be able to use “union-free labor” for the loading and unloading of cargo,” to quote the government’s press release on the indictment.

In addition, three union members were charged with a parallel fraud scheme in which they falsely used the union card of a co-defendant to make it appear that the co-defendant was working hours—and therefore obtaining benefit accrual—that she was not.

While the Five Families of the New York City Mafia have much less influence over organized labor than they once did, law enforcement still must periodically interdict their efforts to target organized labor for racketeering activity. In September 2021, the feds and the New York Police Department arrested 14 defendants including 10 alleged members or associates of the Colombo family including then-alleged boss Andrew Russo and what federal prosecutors called the family’s “entire administration” for a labor racketeering scheme targeting a New York City local union. (Russo died awaiting trial in April 2022.)

The indictment alleged that the defendants had used the threat of violence to extort from a labor union official’s salary for two decades and then expanded the extortion scheme in 2019 to compel the extorted official and others to use Colombo-affiliated vendors for the union’s business and the business of its affiliated health fund. The acting U.S. Attorney’s statement described the charges:

Today’s charges describe a long-standing, ruthless pattern by the administration of the Colombo crime family, its captains, members and associates, of conspiring to exert control over the management of a labor union by threatening to inflict bodily harm on one of its senior officials and devising a scheme to divert and launder vendor contract funds from its health care benefit program.

It has been over 30 years since then-U.S. Attorney Rudy Giuliani announced a civil Racketeering Influenced and Corrupt Organizations lawsuit against the International Brotherhood of Teamsters that would lead to the 1994 consent decree that created the federal oversight that ended mob control of Jimmy Hoffa’s old union. In that time, federal law enforcement has remedied the lackadaisical approach to organized crime of J. Edgar Hoover’s FBI and brought many Mafia figures to justice, hitting labor racketeering schemes hard.

But as this survey of recent history shows, the temptation to raid workers’ pension funds, union dues funds, and health benefit funds is as true today as it was before Hoffa went to the Machus Red Fox in 1975. The United Auto Workers officials corrupted in the Fiat Chrysler scheme sold out their members in exchange for personal perks. The political influence schemes run by John Dougherty and John Coli Sr. were classical political corruption, including giving no-show jobs to powerful politicians with influence over organized labor’s political agendas. And the indictments of the alleged San Juan schemers and Cosa Nostra men show that the old habits of union-related racketeering are not dead yet.

And this report tells only the stories of the crooked bosses and wiseguys who got caught. With the Biden administration (like the Obama administration before it) refusing to increase transparency on union “trusts,” needed scrutiny from the public and union members will have to wait.