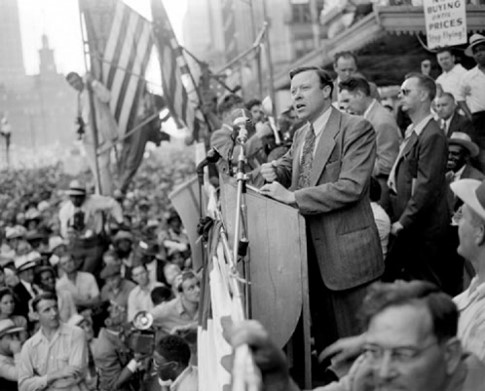 Walter Reuther was a strong anti-Communist in the Cold War, but also an admirer of Scandinavian socialism, who sought to use the million-plus-member UAW as a force to build an American welfare state. Credit: AFSC. Public Domain.
by Michael Watson

A New Cast of Thieves: Kickbacks at Chrysler and Embezzlement at the UAW

What is likely the largest federal union corruption investigation since the 1990s centered on a kickback scheme run through a joint union-management training center. Fiat Chrysler executives and agents would approve the use of training center funds to benefit United Auto Workers officials. In its corporate guilty plea, Fiat Chrysler admitted to paying over $3.5 million in total bribes to UAW brass.

The scheme began no later than 2009, as the Obama administration engineered a merger between Italian carmaker Fiat and the financially distressed, UAW-unionized Detroit stalwart Chrysler. (The merger, which saw the federal government bypass the normal bankruptcy process and give preference to the UAW’s pension fund while issuing a multi-billion-dollar bailout, was detailed by Tim Carney in the July 2010 edition of Capital Research Center’s Labor Watch.) As that was going on in Washington, executives of the now Fiat Chrysler Automobiles (FCA) were cooking up a scheme in Michigan to keep the UAW’s top brass “fat, dumb, and happy,” to quote the indictment of ex-Fiat Chrysler executive Al Iacobelli.

Iacobelli and his UAW negotiating counterpart, General Holiefield—who escaped prosecution by dying of natural causes in 2015—funneled money from Fiat Chrysler into a joint union-management training center that was intended to provide support to union members and then just stole it. Like the Washington Teachers Union crooks from the previous decade, they splurged on personal luxuries: Iacobelli bought himself luxury fountain pens and a Ferrari with a six-figure price tag using cash swindled from the training center. Holiefield and his wife—who was busted by the feds for dodging taxes on the couple’s ill-gotten gains—had a $262,000 mortgage paid off by kickback funds. Holifield and Iacobelli also used the training center to hire Holifield’s wife’s companies, an arrangement that earned a warning from then-UAW international president Bob King, about whom prosecutors said, “The UAW president warned Holiefield and Iacobelli that paying Monica Morgan was a bad idea and that they could ‘go to jail.’”

King’s successors, Dennis Williams and Gary Jones, were less scrupulous. Both would go to federal prison for embezzlement schemes uncovered during the investigation into the Fiat Chrysler kickback arrangements. Both men and several other high-ranking UAW officials had raided union funds to pay for vacations and other personal luxuries. Federal prosecutors highlighted the schemers’ use of stolen funds to pay for golf clubs and equipment and $60,000 in cigars.

The scandal, which as of writing has led to at least 17 convictions of UAW officials and FCA management representatives, federal oversight of and organizational reform within the union, and a corporate guilty plea by and $30 million fine against Fiat Chrysler, is a capstone of the downfall of what was once America’s “clean” union. In the 1950s, Republicans led by Sen. Barry Goldwater (R-AZ) sought to pin corruption or union violence on left-wing UAW leader Walter Reuther, but they couldn’t. Goldwater was reduced to attacking Reuther’s socialist politics: “I would rather have Hoffa stealing my money . . . than Reuther stealing my freedom.”

Michael Barone, who lived in Detroit during Reuther’s and the UAW’s heyday, has written:

Walter Reuther and the UAW were far from uncontroversial half a century ago. Reuther was a visionary liberal, a supporter of civil rights when other labor leaders like the AFL-CIO’s president George Meany was skittish. Reuther was a strong anti-Communist in the Cold War, but also an admirer of Scandinavian socialism, who sought to use the million-plus-member UAW as a force to build an American welfare state. Reuther was also an austere man who limited UAW officers’ and staffers’ salaries and perquisites far below those of many other unions, including the Teamsters headed by his Detroit-based rival Jimmy Hoffa.

Reuther was often attacked by Republicans, including Richard Nixon, Barry Goldwater and George Romney. But he was never accused of self-enrichment or taking bribes. . . .

Walter Reuther . . . worked hard to create an anti-corruption culture in the UAW, one which continued to prevail under his two successors as union president. Its apparent breakdown, in my view, has elements of tragedy.

Reuther’s austerity and probity have left the UAW’s headquarters, even if his loyalty to the Democratic Party persists.

In the next installment, a union official and a city councilman in Philadelphia are convicted of fraud and bribery. 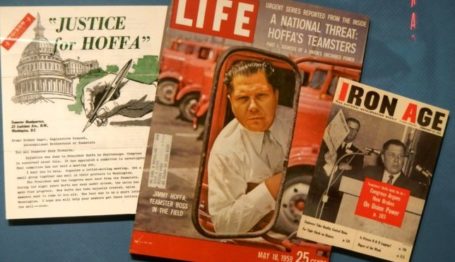