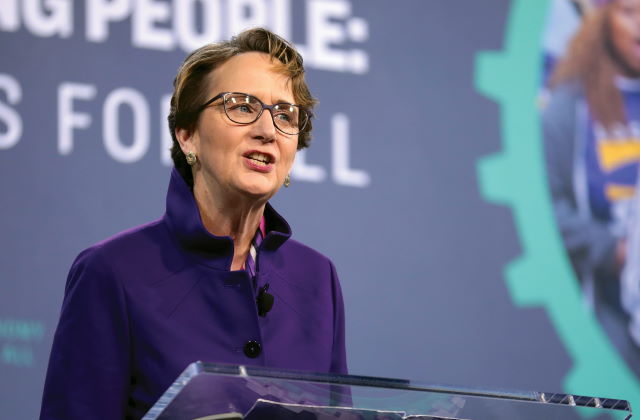 Mary Kay Henry, SEIU president since 2010, would ultimately take a seat on the Democracy Alliance’s board of directors. Credit: Gage Skidmore. License: https://bit.ly/3J2nlf4.
by Robert Stilson

Summary: For years the Democracy Alliance has embodied big money on the American Left. The alliance is as notable for the tremendous depth of its partners’ pockets and for the relative secrecy of its operations. Perhaps unsurprisingly, given the partisan proclivities of organized labor in the United States, unions have occupied a central place in the Democracy Alliance from the very beginning.

Few groups exemplify politically active money on the American left quite like the Democracy Alliance. The self-described “preeminent network of donors dedicated to building the progressive movement in the United States”[1] has been called “[t]he country’s most powerful liberal donor club.”[2]

The alliance, which channels vast sums of money into left-of-center causes every year, is as notable for the tremendous depth of its members’ (known as “partners”) pockets as for the relative secrecy of its operations. Perhaps unsurprisingly, given the partisan proclivities of organized labor in the United States, unions have occupied a central place in the Democracy Alliance from the very beginning.

Unions and the Democracy Alliance’s Beginnings

The origins of the Democracy Alliance can be traced to the aftermath of Democratic Party losses in the 2004 U.S. general election, especially the reelection of President George W. Bush.[3] The results frustrated much of the ultra-wealthy liberal donor class, who had spent serious money on defeating the president. According to journalist Matt Bai’s 2007 book The Argument: Inside the Battle to Remake Democratic Politics, “In all of American history, no small group of partisans had ever invested so much money to win a single campaign.”[4]

Some major funders on the left began to see the need for something similar and officially came together in 2005 to create the Democracy Alliance. Much of the network’s initial gravity centered on billionaires like George Soros and Peter Lewis, whose families would contribute roughly a third of the initial $39 million invested in the alliance. Soros was the single largest early contributor, pledging more than $10 million by the fall of 2005.[6]

The Democracy Alliance’s early years are recounted in considerable detail by Bai in The Argument, and he relates how labor unions quickly became involved. While the AFL-CIO (the largest union federation in the country) was an early alliance partner, the Service Employees International Union (SEIU) was the nascent network’s first institutional member. It was also one of its biggest early funders. By the end of the alliance’s spring 2006 conference the SEIU had committed more than $5 million and was even housing the alliance’s offices at its headquarters in Washington, DC.[7] Before the year was out, SEIU’s secretary-treasurer Anna Burger was sitting as vice chair of the Democracy Alliance’s board of directors.[8]

The enthusiasm with which the SEIU embraced the alliance almost from its inception was due in large part to the influence of then-SEIU president Andy Stern. Having himself viewed Rob Stein’s PowerPoint presentation, Stern not only brought the union into the alliance as a partner, but personally sought to guide it along a path toward funding “innovative ideas that would change the [Democratic] party.”[9] He was a key opening night panelist at the alliance’s spring 2006 conference in Austin, Texas, where he expounded his views about the future of Democratic politics.[10] Although Stern stepped down from the SEIU presidency in 2010, his successor Mary Kay Henry would ultimately take a seat on the alliance’s board of directors.[11]

Other unions and union officers would follow the AFL-CIO and the SEIU into the Democracy Alliance. According to conference documents obtained by the Washington Free Beacon in 2014, then-president of Workers United (a SEIU affiliate) Noel Beasley was listed as a new partner. The prior year saw Communications Workers of America (CWA) president Larry Cohen and senior director George Kohl along with American Federation of Teachers (AFT) president Randi Weingarten and assistant to the president Michelle Ringuette listed as new partners.[12]

The National Education Association (NEA) and the American Federation of State, County, and Municipal Employees (AFSCME) have also been identified as Democracy Alliance partners,[13] as has the United Food and Commercial Workers (UFCW).[14] The American Federation of Government Employees (AFGE) reported a $70,000 contribution to the alliance on its 2019 Form LM-2 filed with the U.S. Department of Labor,[15] which corresponds to the annual dues required of institutional Democracy Alliance partners.[16]

In the next installment, the Democracy Alliance funnels money nonprofits tied to the labor movement.