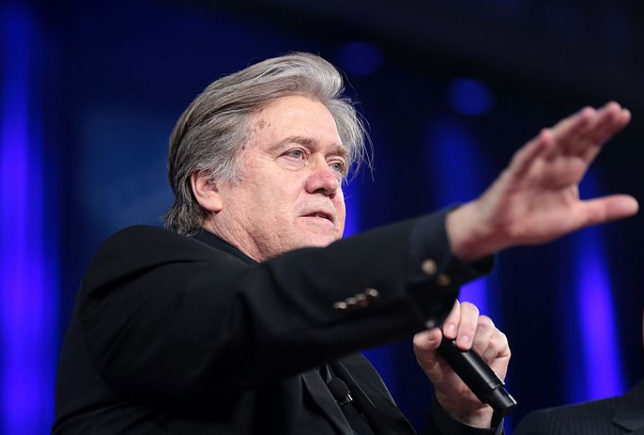 Steve Bannon was indicted and arrested for fraud in connection with the We Build the Wall fundraising campaign.
Credit: Gage Skidmore. License: Wikipedia Commons.
by Michael Watson

At Capital Research Center, we adamantly support “donor intent”—the principle that nonprofits should (mostly) do what their donors gave them money to do, not whatever their staff or management want to do.

Usually the abuses of donor intent we analyze manifest themselves as a bequest of a now-deceased pro-business or conservative donor falling under the control of the left-progressive management of the donor’s private foundation. For example, see the Ford Foundation, the Surdna Foundation, the Rockefeller philanthropies, and the Carnegie philanthropies, among others.

But not just titans of industry need to worry about donor intent; the little guy does too. That brings us to the indictment of Steve Bannon, former Trump administration adviser, and three other right-wing activists who orchestrated the We Build the Wall crowdfunding campaign and then allegedly used it as their personal piggy bank.

A Not Insane Idea

Laying aside the merits or demerits of constructing a wall on the southern border, raising money from private actors to support a government program is neither new nor unusual. Liberal donors do this all the time. To choose one example, Bloomberg Philanthropies funded lawyers in state attorneys general’s offices to conduct environmentalist litigation and prosecutions. So, as far-fetched as it might seem, the We Build the Wall donors giving money to help the federal government enforce immigration law was not totally insane.

However, despite explicitly vowing “to take no salary,” the men behind We Build the Wall spent a substantial amount of the money they raised toward purposes other than building a border wall or otherwise assisting immigration enforcement. Instead, as Andy McCarthy–former prosecutor and now-National Review writer and commentator on the investigation into how the Trump-Russia conspiracy theories penetrated the highest levels of government–notes, the government alleges:

[We Build the Wall front-man Brian] Kolfage is alleged to have received over $350,000 and to have spent it on home renovations, boat payments, a luxury SUV, a golf cart, jewelry, cosmetic surgery, personal tax payments, and credit-card debt. More than $1 million is said to have been diverted to Bannon’s Non-Profit-1. Besides paying Kolfage, Bannon is accused of spending donor funds on “personal uses and expenses unrelated to We Build the Wall.” The four defendants collectively received hundreds of thousands of dollars in donor funds, the indictment says, “which they each used to pay for a variety of personal expenses, including . . . travel, hotels, consumer goods, and personal credit card debts.”

This is another way to dishonor donor intent: Rather than changing the desired public policy or philanthropic end, just pocket the money.

Assuming the government’s allegations are substantially accurate, Bannon and company’s scheme is a double fiasco for the conservative movement. First, the supporters of We Build the Wall were (presumably) largely ordinary conservative supporters. The campaign originated on the crowdfunding website GoFundMe. Among the people the group allegedly ripped off was an eight-year-old kid who contributed money from a hot chocolate stand. The people who gave to the campaign deserved to have their money go toward helping build a border wall, however that was to happen, because that is what they were sold. Instead, it allegedly went to support Steve Bannon’s and his codefendants’ personal lifestyles.

The second fiasco is similar: Every wasted (or stolen) dollar on the conservative ideological side is more harmful than a wasted dollar on the left-progressive side. As Capital Research Center has demonstrated, the advocacy world on the Left is substantially larger than that on the Right. Money on the Right, whether from small donors or from institutions with professional staff to vet recipients, simply must go farther in right-of-center advocacy than money in left-of-center advocacy.

Left-progressive advocacy has numerous institutional advantages. O’Sullivan’s Law (“All organizations that are not actually right-wing will over time become left-wing.”) does not fully cover the ability of left-progressive management to redirect an institution to support progressivism. As the history of the Pew Charitable Trusts shows, a sufficiently “creative” management can move an explicitly right-wing group to the left. The people who typically work for nonprofit groups, like communications people throughout business and civic life, tend to lean left. And I would be remiss to fail to note that some major left-progressive institutions such as labor unions can even compel people to fund them.

Conservative groups do not have those luxuries. Whatever portion of the reported $25 million raised by We Build the Wall that did not go toward supporting immigration enforcement was a loss of resources that conservatives can ill afford. And that’s before anyone who supported the We Build the Wall effort decides never to support a legitimate advocacy or policy campaign again because “Fool me once, shame on you; fool me twice, shame on me.”

For those of us who are left in this business, let the apparent fall of House Bannon be a lesson in stewardship.