A Few “Laws” of Influence and Politics 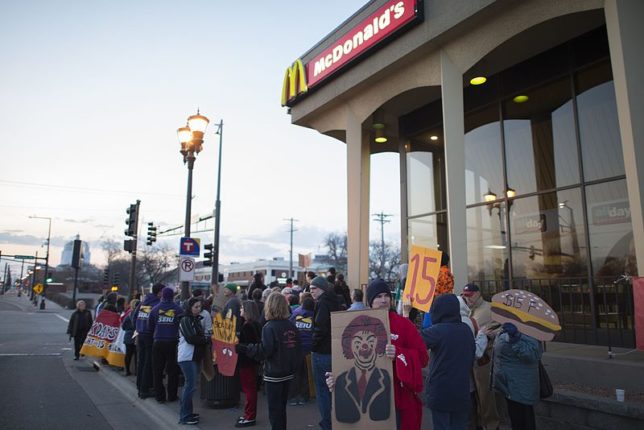 It’s rare that the current news cycle provides three perfect instances of “laws” of political practice, in practice. The wit and wisdom of John O’Sullivan, Meghan McArdle, and Michael Barone all ring true in the trending topics of the day.

The first example features supporters of the Service Employees International Union (SEIU) and the rest of organized labor gloating after McDonald’s corporate headquarters capitulated to their demands and announced it would no longer lobby against minimum wage hikes. But they didn’t rest on their laurels—they are now pushing for more expansive concessions to its agenda.

And McDonald’s capitulation—which did not satisfy an SEIU desperate to unionize the remaining McDonald’s workers—is hardly unique in caving to the demands of the activist Left. It is not surprising that McDonald’s made this decision as it rolls out self-service ordering kiosks throughout the country; a large corporation like McDonald’s has the ability to weather regulations (like labor mandates) that its smaller competitors cannot.

And while McDonald’s maneuver is likely more a bid to hurt less-computerized competitors than a strike for socialism with Golden Arches, O’Sullivan’s Law reminds one that the business community is not necessarily the friend of free enterprise. “O’Sullivan’s Law,” is named for British journalist John O’Sullivan who coined it in a 1989 National Review article; he wrote, “All organizations that are not actually right-wing will over time become left-wing.” (Of course, the history of philanthropy shows that even being explicitly right-wing cannot fundamentally protect a conservative institution from becoming left-wing: The history of the Pew Charitable Trusts illustrates this.)

Recent months have also affirmed other journalists’ “laws.” The battle over “net neutrality,” recently resumed in the House of Representatives where Democrats advanced a bill to restore Obama-era “Title II” state control of internet service providers—a policy preference of Silicon Valley “content” companies like Alphabet (parent of Google and YouTube). Put simply, service providers want content companies to pay the full economic price for the bandwidth they use. Netflix, a net neutrality supporter, alone uses about 20 percent of the bandwidth in the U.S., as of a 2018 estimate. The content companies prefer a “neutral” system, under which service providers may not meter, slow, or otherwise alter the rate of provision of “packets,” the units of internet data; their greatest fear is that service providers would cut off access to their services, either for ideological reasons or to gain leverage in a business dispute.

Net neutrality is another great example of “Jane’s Law,” articulated by commentator Meghan McArdle. McArdle proposed, “The devotees of the party in power are smug and arrogant. The devotees of the party out of power are insane.” Liberals certainly have lost their minds over net neutrality: CNN declared the FCC’s decision the “end of the internet as we know it,” echoing the talking points of a number of radical progressive “dark money” outfits.

But they were wrong: As FCC Chairman Ajit Pai dryly remarked at a recent National Review Institute event: “You can still hate-Tweet your favorite FCC Chairman.” Republicans have touted increased internet speeds since the order’s passage; but if internet service providers do decide to cut off access to certain parts of the internet the way the web-using public and the “content” companies with which they interact fear, the public may turn sharply toward the model of state control preferred by the socialists at Free Press, a leading pro-Title-II advocacy group.

Even fundamental constitutional questions are subject to the political “Laws.” Consider the ongoing debate over the Electoral College, which suddenly became a hot-button issue in 2016, when it stopped favoring Democrats (slightly, from 2004 through 2012) and instead favored Republican candidate Donald Trump. Indeed, there was little discussion in the national media of the unfairness of the Electoral College while commentators speculated on a permanent Democratic advantage in the electoral system—a “Blue Wall” of 18 states worth 242 electoral votes that no Republican candidate had won from 1992-2012. But then Trump won three of those states (and every state won by Mitt Romney in 2012; the swing states of Iowa, Ohio, and Florida; and Maine’s elector for the 2nd Congressional District) despite receiving fewer total “national popular” votes, and progressives reverted to their 2000-2004 approach crying foul about the electoral system. They thus fulfilled “Barone’s Law,” named for political demographer Michael Barone: “All process arguments are insincere, including this one.”

It is easy to imagine President Trump or his supporters complaining bitterly about the Electoral College had the election turned out differently. One can also think that progressives would defend regional balancing and note the relative lack of countries that use plurality voting for national leaders, had the “Blue Wall” held. That the Electoral College itself is strongly defensible in principle does not displace Barone’s insight; with rare exceptions, commentators take their positions on procedural issues mostly by circumstance.

Taken together, O’Sullivan’s Law, Jane’s Law, and Barone’s Law caution the consumer of political rhetoric to beware. A “neutral” organization may suddenly jolt Left, the polarized parties may periodically lose their heads, and a supposed high principle may be cover for whining about losing.