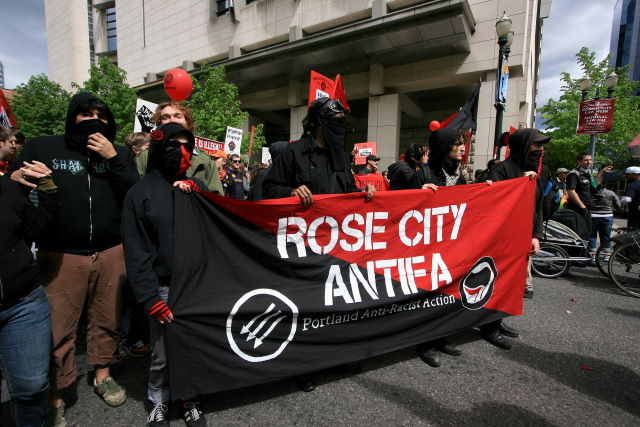 Some Answers to Questions About Antifa (full series)
What Is Antifa? | Where Did Antifa Come From?
What Does Antifa Want? | Who Supports Antifa?

Where Did Antifa Come From?

Antifa’s roots are primarily found in interwar Europe, especially within the tumultuous jockeying among the fascist, communist, and democratic political factions trying to fill the vacuum that was Weimar Germany in the early 1930s. Modern American Antifa traces its organizational lineage to the 1980s, and at least some of its ideological legacy to the various radical-left movements of the 1960s and 1970s.

The ideological antecedents of Antifa stretch back into the 19th century, and concerted anti-fascism emerged more or less contemporaneously with fascism in 1920s Italy. But the true spiritual ancestor of today’s Antifa was the far-left Antifaschistische Aktion, founded and controlled by the Communist Party of Germany in the last years of the Weimar Republic. The symbolism and tactics of this organization remain readily observable among many modern Antifa groups.

Although often remembered as Nazi fighters—and they certainly were that, too—Antifaschistische Aktion was in truth more deliberately employed against social democrats. To the Stalinist-aligned Communist Party of Germany, the Social Democratic Party was the real enemy (they called them “social fascists”) and Hitler’s Nazis were the lesser evil, at least for the time being. Indeed, Antifaschistische Aktion was originally formed as a response to—and actively sought to undermine—a group called the Iron Front, which was a last-ditch alliance of German democrats desperately trying to defend the Weimar Republic against the twin totalitarian threats of communism and fascism.

In the United States, organized Antifa can be traced back to the 1980s, specifically to a group originating in Minneapolis called Anti-Racist Action. Mark Bray, author of Antifa: The Anti-Fascist Handbook, explains how Anti-Racist Action took inspiration not only from existing European Antifa groups, but also from a variety of American radical-left formations. He points to the John Brown Anti-Klan Committee—formed by former members of domestic terrorist groups like the Weather Underground and the May 19th Communist Organization—as well as the Black Panthers and the Black Liberation Army as examples. Bray writes that “it is crucial to situate [Anti-Racist Action] within a much longer and deeper struggle against a wide variety of Klansmen, hooded or otherwise.”

Rose City Antifa was established in 2007 by former Anti-Racist Action members, and the Torch Network was “born out of” Anti-Racist Action in 2013. This was still before the word “Antifa” was familiar to most Americans. It would remain that way until roughly 2017, when it exploded into public consciousness to such a degree that the Oxford Dictionaries included it on its shortlist of finalists for Word of the Year. That year, a series of very public confrontations between Antifa and those whom they opposed—most notably the assortment of neo-Nazis and other white supremacists at the Unite the Right rally in Charlottesville—drew unprecedented attention to the movement.

This was all against the backdrop of the first year of Donald Trump’s presidency—a presidency that was the political personification of much of what the Left despised. Reflecting Trump’s (and his supporters’) significance to Antifa, Bray wrote in 2017, “Our goal should be that in twenty years those who voted for Trump are too uncomfortable to share that fact in public.” A member of Rose City Antifa told Buzzfeed News, “Before Trump, being antifa was more of a bizarre hobby that people had.”

Beginning in the late spring and early summer of 2020, as part of a larger wave of unrest largely related to police brutality, race relations, and the Black Lives Matter movement, Antifa became closely identified with rioting and street violence in several American cities. Portland and Seattle were two of the most prominent cities experiencing riots. These riots have continued into 2021, well after President Trump lost his bid for re-election to Joe Biden. Portland Mayor Ted Wheeler blamed that city’s New Year’s Eve riots on “violent antifa and anarchists.” A few weeks later, anti-fascist protesters attacked the Democratic Party’s Portland offices to protest Biden’s inauguration.

In the next installment, explore the extent of Antifa’s contempt for American society.