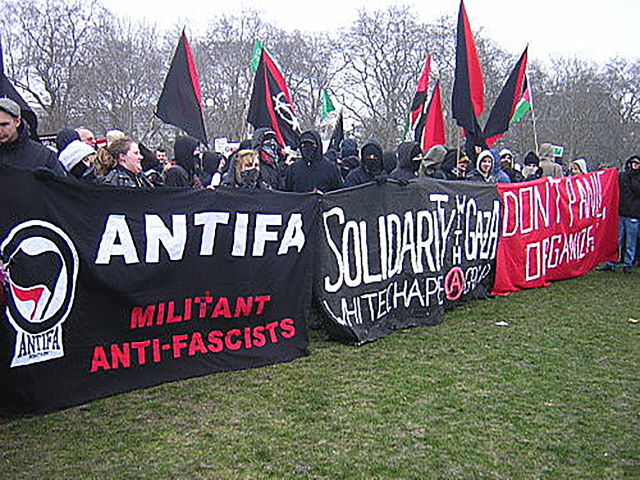 The NLG’s San Francisco Bay Area Chapter wrote an opinion piece for the San Francisco Chronicle entitled “We Are All Antifa,” in which they declared that the “campaign to recast antifa as a violent, leftist suppression of speech is a dangerous effort eerily reminiscent of the left-baiting that accompanied the Nazi rise to power.” Credit: Antifa BiH. License: https://bit.ly/3sGYog8.
by Robert Stilson

Some Answers to Questions About Antifa (full series)
What Is Antifa? | Where Did Antifa Come From?
What Does Antifa Want? | Who Supports Antifa?

Very little is publicly known about how—and the extent to which—Antifa groups are funded. There are a few reasons for this. First, in many contexts it can be difficult to separate support for radical-left politics broadly from specific support for Antifa. An individual or organization might express support for an Antifa-aligned ideology (or even for Antifa itself) without providing direct, tangible support—financial or otherwise. In this respect, asking “who supports Antifa?” is similar to asking “who supports the Alt-Right?” It’s a difficult or impossible question to answer with any real specificity.

Evidence of direct financial support to Antifa groups is scant. This is probably because much of what Antifa does is not terribly expensive, and thus it requires little financial support. Mark Bray has speculated that “whatever little money [Antifa] groups have come from members themselves.” To the extent that any funding streams might be directly supporting riots or other criminality in America’s cities, investigating those streams is more properly a job for law enforcement.

Some local Antifa groups appear to accept donations or sell merchandise as a way to raise funds, but others do not. Rose City Antifa’s website explains that “we don’t have an online store or any way to accept donations.” Atlanta Antifascists’ website donate page says “NEW FUNDRAISER COMING SOON.” The Revolutionary Abolitionist Movement sells copies of a book called Burn Down the American Plantation, alongside black flags with its logo printed on them. Antifa Sacramento sells merchandise on its website and accepts donations.

Some conspiracies have surfaced that purport to link well-known liberal funders like George Soros to Antifa, either personally or through one of his foundations. These conspiracies are false. Soros’s foundations have indeed provided vast sums of money to a bevy of left-wing groups—some of them fairly radical—but no evidence suggests they have funded Antifa. A nonprofit or foundation that reported a grant to “Antifa Sacramento” on its IRS Form 990 would be newsworthy indeed, but is exceedingly unlikely.

One organization that does appear to provide direct financial support to Antifa members is the International Anti-Fascist Defence Fund. Launched by the Antifa International collective in 2015, it functions as a “standing fund . . . used to provide immediate support to anti-fascists and anti-racists anywhere in the world, whenever they found themselves in a difficult situation as a result of their stand against hate.” Mark Bray pledged to contribute at least half of the author proceeds from sales of Antifa: The Anti-Fascist Handbook to this organization, and the Torch Network directs prospective supporters to its website. According to its fundraising page, the International Anti-Fascist Defence Fund has “donated more than $100,000USD to over 500 anti-fascists and anti-racists in 22 countries.”

Andy Ngo has identified the National Lawyers Guild (NLG) as an organization that provides legal support to Antifa. He describes it in Unmasked as “in effect . . . the legal arm of antifa.” Available evidence appears to support this assertion. In 2017, the NLG put out an essay on “Legal Support for Anti-Fascist Action” in which it declared, “The NLG will continue to support anti-fascists and anti-racists in the street and in the courts, and will not be swayed by the argument that hateful, dangerous speech should be tolerated at any cost.”

The Wall Street Journal has reported that NLG organizers have gathered with self-described Antifa representatives “to discuss tactics” prior to protests, and in 2020 the NLG approved a resolution calling for “the defunding, dismantling and abolition of all forms of policing.” In 2017 members of the NLG’s San Francisco Bay Area Chapter, including its president, wrote an opinion piece for the San Francisco Chronicle entitled “We Are All Antifa,” in which they declared that the “campaign to recast antifa as a violent, leftist suppression of speech is a dangerous effort eerily reminiscent of the left-baiting that accompanied the Nazi rise to power.”

The NLG, in fact, has a long history of alignment with radical-left movements. In his 1988 book Far Left of Center: The American Radical Left Today, historian Harvey Klehr wrote of how the 1970s-era NLG had a membership that included “communists, Maoists, Trotskyists and other assorted radicals,” some of whom were also active in far-left terrorist groups like the Weather Underground and the May 19th Communist Organization. This is the same legacy of radicalism that influenced Antifa’s origins in the United States.

Today, the NLG’s national chapter operates as 501(c)(4) nonprofit, with an affiliated 501(c)(3) called the National Lawyers Guild Foundation (NLG Foundation). The two groups had combined 2018 revenues in excess of $3 million, according to their IRS tax filings. That year, a 501(c)(3) provider of donor-advised and agency funds called Greater Horizons reported more than $2.7 million in grants to the NLG Foundation. Greater Horizons is affiliated with the Greater Kansas City Community Foundation. From 2017 to 2019, the Fidelity Investments Charitable Gift Fund and the Schwab Charitable Fund have provided roughly $130,000 and $71,000 to the NLG Foundation, respectively.

The Warsh Mott Legacy, a private family foundation, gave $110,000 to the NLG Foundation from 2016-2018. An affiliated foundation, the CS Fund, provides a matching grant to support the NLG’s Mass Defense Program. Donations to the NLG Mass Defense Program are used for several purposes, including training “Legal Observers to monitor police at protests.” The program also facilitates meetings with organizers about “protest actions, and legal consequences” and provides representation in the event of arrest.

Sympathetic businesses, nonprofits, and other organizations can also make themselves available to Antifa, join Antifa in protests, or produce material supportive of it. A Portland-based cidery called Cider Riot was well-known locally as a gathering place for far-left radicals, including Antifa. Another former Portland business—a bookstore called In Other Words—apparently hosted orientation sessions for prospective Rose City Antifa members as recently as 2017, according to Andy Ngo’s Unmasked.

While it was still in operation, In Other Words was listed on the “Radical Contact List” of the Slingshot Collective, a Berkeley, CA-based radical newspaper publisher. The first sentence of an August 2019 essay entitled “F*** the Police: Tips for Dealing with Cops” cites a National Lawyers Guild guide, and concludes by admonishing activists to remember that “[s]mashing the system is going to require mass action as well as secretive covert actions by a tiny clique of your trusted friends.” Another article published in 2018 declares, “While everyone may not be willing or able to confront fascists in the streets, we should all respect antifa’s leadership.” The Slingshot Collective operates as tax-exempt project of a 501(c)(3) nonprofit called Long Haul, which had 2018 revenues of about $62,000.

A group called Refuse Fascism has been identified as being more-or-less ideologically aligned with Antifa and has publicly defended Antifa activities, although a representative of the group has denied any formal partnership or communication. Refuse Fascism officially pursues only nonviolent protest actions. Founded by members of the Revolutionary Communist Party, Refuse Fascism is a fiscally sponsored project of the Alliance for Global Justice, another 501(c)(3) nonprofit that has received substantial support from numerous nonprofits, foundations, and labor unions. Among its other projects, the Alliance for Global Justice sponsors the annual Venceremos Brigade trips undertaken by U.S. leftists to show solidarity with communist Cuba.

Why Understanding Antifa Is Important

Mark Hemingway said it best when he wrote that “Antifa is, in fact, hard to pin down.” This is a frustrating reality for many Americans who are angry with the rioting, destruction, and general lawlessness that they’ve seen in America’s cities and want an explanation. How much of this lawlessness to assign to Antifa specifically is unknowable with any degree of precision. At the same time, everybody understands that in many places Antifa groups are, at the very least, contributing to lawlessness.

Even more fundamentally, for the gigantic swath of America that is hostile to both the far-left and the far-right—those of us who rather like our traditions of capitalist liberal democracy and think, for all its current and historical flaws, it’s still the best manner of structuring a society that anyone has yet devised—understanding Antifa feels critical. How could someone possibly develop so much antipathy toward the United States that they would entertain the idea of destroying it? And to what could they possibly point, with even a modicum of honesty, as a better model?

For these reasons, questions about Antifa—and indeed about all militant ideologies on either side of the spectrum—should continue to be asked and answered as accurately as available information allows.