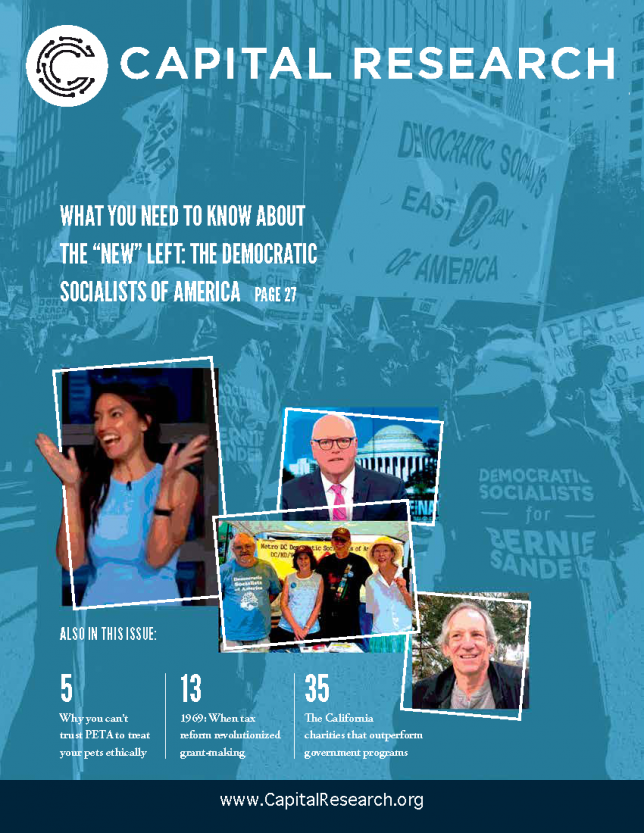 We are proud to announce Issue 7 of Capital Research for 2018 is now available! Here’s a peek at what’s inside:

Matthew Vadum investigates the underlying beliefs of the Democratic Socialists of America. Enjoying newfound prominence thanks to Alexandria Ocasio-Cortez and the “Resistance,” the DSA’s membership has grown at an alarming rate. But is there anything “democratic” about these socialists? Find out in Organization Trends.

What’s the relationship between tax reform and political giving? In 1969, reformers worked to increase accountability among large charitable foundations, which were a little too close to certain political causes. While contentious, the hearings on foundations helped shape the nonprofit landscape that we operate in today. Read more about the 1969 tax reform hearings in Foundation Watch.

When is a rat, a pig? How does a dog become a boy? When you’re an animal rights activist, there is no distinction. This moral relativism, coupled with outrageous protest tactics is the foundation on which the People for the Ethical Treatment of Animals (PETA) built its scandalous reputation. Learn how academics, misanthropes, and radicals shaped PETA’s “ethical” worldview here.