The “New” Left: The Democratic Socialists of America 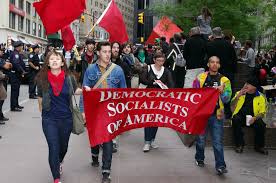 A radical leftist upstart’s unexpected trouncing of a key member of the House Democratic leadership in a primary is sending shockwaves through the Democratic Party establishment.

I refer to Democratic Socialists of America (DSA) member and first-time candidate Alexandria Ocasio-Cortez, at the time a 28-year-old of Puerto Rican ancestry, who crushed longtime U.S. Rep. Joe Crowley, a 56-year-old Irish-American Catholic, in the June 26 primary election for the 14th congressional district in New York, covering parts of the boroughs of Queens and the Bronx. Crowley chairs the House Democratic Caucus, the fourth-highest leadership position among House Democrats, and he was a leading contender to become House Speaker, if Democrats regained control of that chamber.

Ocasio-Cortez’s victory made her an instant star in leftist circles. Democratic National Committee (DNC) chairman Tom Perez promptly hailed her as “the future of our party.”

Ocasio-Cortez won by running on a far-left platform of abolishing the U.S. Immigration and Customs Enforcement (ICE) agency, socializing health care by forcing everyone into Medicare, providing free college education, guaranteeing jobs for all, as well as passing a $15 per hour federal minimum wage. Ocasio-Cortez, who previously worked as an organizer for Sen. Bernie Sanders’ 2016 presidential bid, garnered 57.5 percent of the vote, compared Crowley’s 42.5 percent.

Although Ocasio-Cortez bested Crowley almost everywhere in the district, Steven Romalewski, director of the Mapping Service at the City University of New York’s Center for Urban Research, found that upwardly-mobile voters were largely responsible for her victory. Her strongest support “came from areas like Astoria in Queens and Sunnyside in Queens and parts of Jackson Heights that, number one, were not predominantly Hispanic, so they’re a more mixed population, and are areas where—this is kind of a term of art—are in the process of being gentrified, where newer people are moving in,” he said in The Intercept.

Ocasio-Cortez may be determined and passionate, but she’s a political novice who often puts her foot in her mouth. In one media interview, the newly anointed leftist folk hero seemed to confuse ICE with the CIA. ICE’s “extrajudicial nature is baked into the structure of the agency and that is why they are able to get away with black sites at our border with the separation of our children,” she said on CNN June 27.

Ocasio-Cortez attacks more moderate Democrats for trying to impose any kind of restraint on federal spending, accusing them of pushing the notion that “we’re going to austerity our way into prosperity.”

Ocasio-Cortez’s surprise win bears more than a passing resemblance to now-U.S. Rep. Dave Brat’s (R) unexpected primary victory over then-U.S. Rep. Eric Cantor in Virginia’s 7th district in 2014. At the time, Cantor was House majority leader, outranked only by then-Speaker of the House John Boehner (R-Ohio). Conservative and Tea Party revulsion at the GOP congressional leadership helped get the no-nonsense conservative economics professor over the finish line and helped to move House Republicans to the political right.

What Is the DSA?

This electoral upset has thrown a national spotlight on the DSA, an up-till-now fairly obscure leftist group that wields significant influence over the Left and the Democratic Party. As a group, the DSA aspires to overthrow the socioeconomic foundations of the United States. The Marxist DSA may be considered a small-c communist group. Its members seek the abolition, not the mere tempering or regulation, of capitalism.

“As a DSA chapter co-chair I just wanna set the record straight for a minute: communism is good,” Portland DSA co-chair Olivia Katbi Smith wrote June 30. The chair of DSA in Charlottesville, V.A., quoted Smith’s tweet, adding, “as a DSA chapter co-chair, I would like to cosign this pro-communist statement.” As The Daily Caller reported, DSA chairs in Seattle and Hudson County, N.J., also provided public statements of support.

Soon-to-be Congresswoman Alexandria Ocasio-Cortez was only slightly less resolute than her DSA comrades. She comes close to saying she supports abolishing the free enterprise system and the precious economic freedoms on which it is based, which have made America wealthy beyond its founders’ wildest dreams.

I do think that right now, when we have this no-holds-barred Wild West hypercapitalism, what that means is profit at any cost. Capitalism has not always existed in the world, and it will not always exist in the world. When this country started, we did not operate on a capitalist economy.

Asked if democratic socialism, the system to which Ocasio-Cortez claims allegiance, “calls for an end to capitalism,” the candidate said: “Ultimately, we are marching towards progress on this issue. I do think that we are going to see an evolution in our economic system of an unprecedented degree, and it’s hard to say what direction that that takes …”

The interviewer interjected: “It sounds like you are skeptical that capitalism is going to continue to be the right answer.”

According to a Vox profile, DSA favors getting rid of capitalism “in favor of an economy run either by ‘the workers’ or the state—though the exact specifics of ‘abolishing capitalism’ are fiercely debated by socialists.”

Marxist academic-activist Frances Fox Piven, who used to be a member of DSA’s board, explained to Vox, “The academic debates about socialism’s ‘meaning’ are huge and arcane and rife with disagreements, but what all definitions have in common is either the elimination of the market or its strict containment.”

The Vox article stated that DSA’s August 2017 gathering in Chicago was the organization’s largest-ever convention, attracting 697 delegates from 49 states.

DSA began making inroads into the Democratic Party decades ago but failed to accomplish much in the electoral realm.

“Since it was founded in 1982, the Democratic Socialists of America has played virtually no role in the country’s elections,” Clint Hendler wrote in Mother Jones. “That’s begun to change, fueled by the organization’s 2016 endorsement of Bernie Sanders and a growth spurt led by the activists and organizers he inspired.”

“There’s a lot of fear in the establishment wing of the party, because this is a movement they cannot control,” Hendler quoted Jim Burn, former chairman of Allegheny County, Pennsylvania’s Democratic committee. “The fearmongers on the other side are taking a page from the Trump playbook and trying to bash them and label them, because they see their power slipping away.”

In the next installment of The “New Left,” learn about the origins of this “socialist moment.”