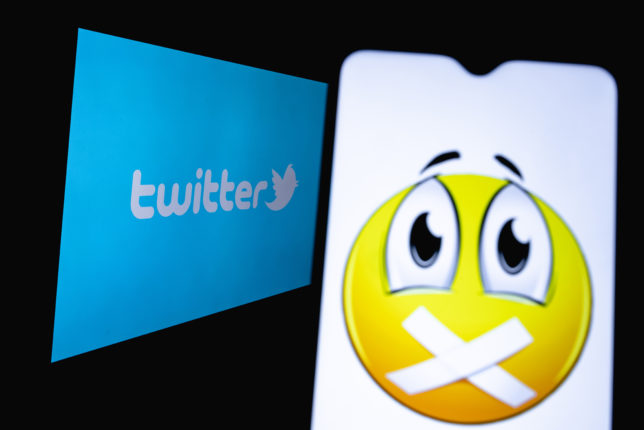 When Tesla and Space X boy genius Elon Musk announced in late April 2022 he was interested in buying Twitter—and subsequently struck a deal to purchase the social media platform for $44 billion—it may not have been a coincidence that the Biden administration decided to unveil the new Disinformation Governance Board housed in the U.S. Department of Homeland Security (DHS) a mere three days later.

After all, Twitter had been instrumental in censoring the New York Post’s story about the salacious and alleged pay-to-play contents of Hunter Biden’s forgotten laptop. The Post’s exposé also detailed the existence of thousands of emails that suggested the younger Biden had been leveraging his daddy’s name for what the Post called “a series of eyebrow-raising overseas business deals.”

Twitter suspended the Post’s account and disallowed sharing of the story between users, cementing what many of the platform’s users had suspected for some time: Twitter leaned left and would clamp down on information that failed to suit their preferred narrative, otherwise known as “viewpoint discrimination.”

A Brief History of Disinformation

Twitter, it turns out, has been in the business of disinformation for several years. The Aspen Institute, a left-leaning think tank, formed a disinformation commission to help produce a report on disinformation that former President Barack Obama—current President Joe Biden was his vice president—echoed at a speech at Stanford University on April 21, 2022. In that speech, Obama outlined the problem of unfettered online speech and what he viewed as its threat to democracy. The former president painted a very frightening picture, indeed. One that ultimately pointed a finger back at “companies that have come to dominate the internet generally, and social media platforms in particular.”

It is odd that Tiana Epps-Johnson, Stanford alum and Obama Foundation fellow, helped introduce Obama at Stanford. Epps-Johnson is also the founder and executive director of the Center for Tech and Civic Life, an supposedly nonpartisan nonprofit that took in hundreds of millions in funding from Mark Zuckerberg to help “fortify” the 2020 election.

What’s more, the Aspen Institute’s disinformation commission—from which Obama pulled some of his themes—includes Twitter head of site integrity Yoel Roth, who was responsible for blocking access to the Post’s article on Hunter Biden.

But Twitter’s censorship of a highly consequential, fact-based news story is not the only way it has gone woke. According to Vivek Ramaswamy and Jed Rubenfeld writing in the Wall Street Journal, “Conservative opinions about transgenderism are censored as ‘attacks’ on a ‘protected group’” and “Conservative views on Covid are flagged as ‘misinformation.’”

Twitter also removed President Donald Trump’s May 2020 tweet (before removing his entire account) that acknowledged violent protests that summer saying “when the looting starts, the shooting starts,” calling it a “glorification of violence.” But the disinformation czars in Twitter corporate ignored Ayatollah Ali Khamenei’s tweets calling for the destruction of Israel and Colin Kaepernick’s tweets supporting the burning of police stations. Users who claimed the 2020 election was stolen found themselves censored, but similar claims about malfeasance perpetrated by Russia in the 2016 election went untouched.

Most recently, current Twitter employees have accused Musk of wanting to harm the trans community because Musk made light of pronouns in Twitter bios calling them an “aesthetic nightmare.”

Academics examining the question of whether Twitter engages in viewpoint discrimination have found interesting results. “Is Twitter Biased Against Conservatives? The Challenge of Inferring Political Bias in a Hyper-Partisan Media Ecosystem, ” a study by MIT and Yale professors concluded that there was an extreme disparity between suspended users based on party: 7.7 percent of the Democrats compared to 35.6 percent of Republicans

The catch—there’s always a catch—is that the study also justified that disparity by noting that Republicans on Twitter “shared substantially more news from misinformation.”

But this is likely not the last we’ll hear of the federal government defining “disinformation” to suit its agenda.